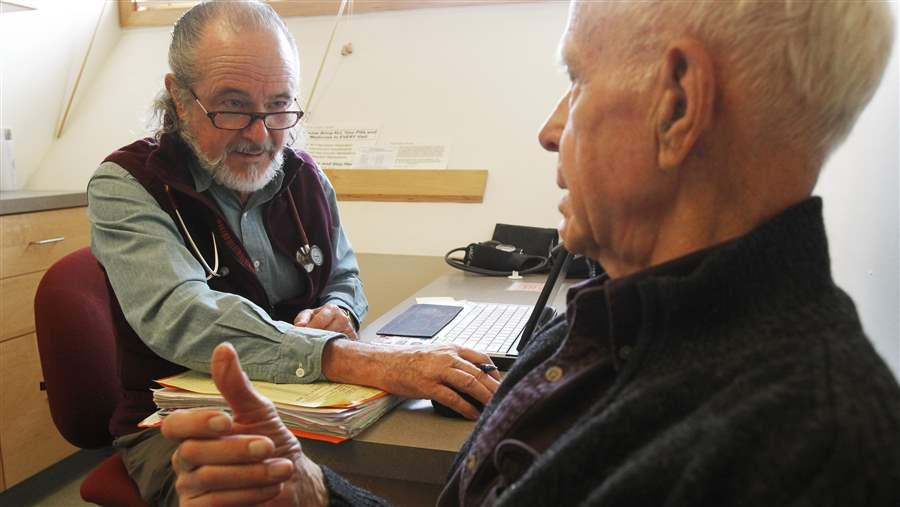 Dr. John Matthew, left, consults with a patient in his Plainfield, Vermont, office. His state has undertaken an experiment to align Medicaid, Medicare and private insurers under one financing scheme aimed at reducing health spending while improving the health of Vermonters.

MONTPELIER, Vt. — This tiny state, with a population more rural and less diverse than the country as a whole, is embarking on an experiment that could transform the delivery of health care nationwide.

Traditionally, doctors and hospitals are paid for each procedure, treatment or test they provide. But critics say this “fee for service” system drives up costs and harms patients by pushing providers to do as much as possible, regardless of whether it benefits patients.

Under Vermont’s plan, to be phased in through 2022, health plans would pay doctors and hospitals based on how well they care for their patients and contain costs, rather than on the volume of services they provide.

Some health care plans, public and private, have been experimenting with “pay for performance” systems for more than a decade. But Vermont’s experiment is the most ambitious, aiming to cover 70 percent of the state’s residents (excluding those who are in out-of-state employer-sponsored plans), whether they are beneficiaries of Medicare, Medicaid or commercial health insurance.

“No one has brought it up to scale like this,” said Matthew Fiedler, a fellow at the Center for Health Policy at the Brookings Institution.

Other states will be watching closely. Studies of smaller pay-for-performance experiments have yielded mixed results in patients’ health outcomes. And in an urban area with competing insurers and hospitals, it would be more difficult to coordinate a pay-for-performance system than it is in Vermont. Nevertheless, if Vermont’s plan is successful it is likely that others will duplicate it.

One goal of the Affordable Care Act is to move the U.S. health care system away from fee-for-service, and the federal Center for Medicare and Medicaid Innovation, which was established under the law, is providing $2.5 million in startup money to help construct the required infrastructure, including information-gathering and data-sharing technology.

The shift is likely to continue even if the federal law is repealed or replaced. Several Republican proposals for replacing the ACA would reward providers for improved health outcomes.

“I don’t think a program like this is in danger,” said Paul Ginsburg, a professor of health policy at the University of Southern California. “There has long been support on both sides of the aisle for payment reform that moves us in the direction of value-based financing.”

Planning for the new Vermont model began more than two years ago, after then-Gov. Pete Shumlin, a Democrat, abandoned his plan to create a universal health system as too costly. He immediately spurred work on what’s known as an all-payer model, involving all the major health plans in the state, as another way to improve quality care while reducing health costs. Republican Phil Scott, who succeeded Shumlin in January, has embraced the plan in principle, but wants to see how it works for a year before committing to the full five years that Shumlin envisioned.

Hospitals, clinics, medical practices, nursing homes and home health agencies that choose to participate in Vermont’s experiment would join one of two “accountable care organizations,” or ACOs, which are groups of doctors, hospitals and other providers who combine to coordinate the care of their patients.

At the beginning of each year, Medicare, Medicaid and Blue Cross Blue Shield (Vermont’s dominant private insurer) would pay the ACOs a per capita amount to cover the care of each patient. Participating providers would earn financial rewards for staying under budget, and for meeting standards of high-quality care.

The ACOs have agreed to limit spending growth to about 3.5 percent a year for the five years of the experiment. (The national growth rate for health spending in 2015, the last year for which data is available, was 5.8 percent.) As a reward for staying under budget, the ACOs would receive up to 3 percent of the amount they were budgeted. If they miss the targets, they would have to pay a penalty of up to 3 percent. The model doesn’t count spending on prescription drugs.

Many of the quality measurements align with three broad state goals: improving access to primary care, reducing deaths from suicide and drug overdoses, and reducing the prevalence of chronic diseases, such as diabetes, high blood pressure and respiratory disease.

For the last three years, the two ACOs in the state and some Blue Cross Blue Shield providers have participated in a “shared savings” system, a precursor to the current experiment in which providers were eligible for rewards if they met financial and quality targets, but were not penalized if they didn’t.

Because payments will be based on the health outcomes of patients, the architects of Vermont’s all-payer model think doctors and hospitals will provide services they forgo under a fee-for-service system because they are not paid for them. Some of those services will not only benefit patients, but save money in the long run.

For example, providers might employ aides to call patients to make sure they are taking medications properly, remind them of upcoming medical appointments, and help arrange transportation. Or they might hire social workers to visit the homes of infirm patients to determine whether installing ramps or handles might help with mobility or prevent falls. Such services, they say, will keep patients healthier and out of hospitals and emergency rooms, thereby avoiding greater expenses.

All of the providers in the ACOs will use the same electronic health record system, allowing for seamless communication between hospitals, practices, home health agencies and nursing homes. The single system will make it easier for providers to share what works best for each patient.

A pay-for-performance model exposes doctors and hospitals to some financial risk. But Norman Ward, chief medical officer of OneCare Vermont, one of the participating ACOs, said it also gives them more independence. For example, physicians will be able to prescribe any medications they think appropriate without first securing the insurer’s permission, a practice called “prior authorization.”

“Doctors are going to like this because it gives them the flexibility that they haven’t had in the past,” Ward said.

And, if more commercial insurers come on board, it will mean that doctors won’t have to conform to the red tape of multiple payers, which doctors complain leads to higher administrative costs.

The Vermont Medical Society, which represents the state’s doctors, supports the move toward pay-for-performance, but not all its members are on board.

Robert Emmons, a psychiatrist in Burlington, likened the model to “capitated payments” under managed care, in which providers also are paid a certain amount to cover the care of each patient. That system has prompted some patients to complain about being denied treatment for budgetary rather than medical reasons.

“This sounds to me like old wine in new bottles,” Emmons said.

Seniors also were initially worried about the plan and the possibility of receiving fewer services, said Dave Reville of AARP Vermont.

But AARP’s representatives were reassured after meeting with Govs. Scott and Shumlin. “We’ve been assured there will be no change for [Medicare beneficiaries],” Reville said.

John Brumsted, CEO of the University of Vermont Medical Center, the state’s largest health system, said the shift to pay-for-performance is long overdue.

“What we’re doing is finally aligning the business model with the mission of improving population health,” Brumsted said.