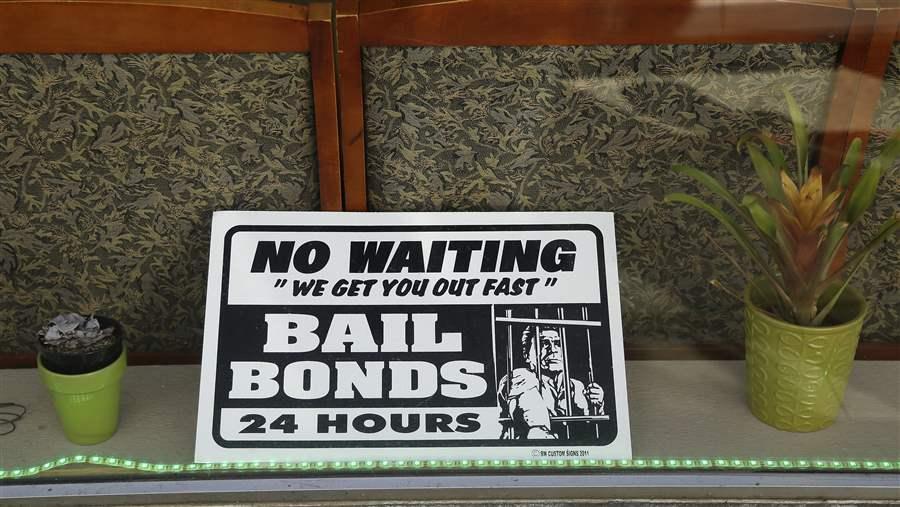 A sign in the window of a bail bonds office across from the Hall of Justice in San Francisco. Increasingly, states are reevaluating the purpose of cash bail and are making big changes to the practice.

In the midst of a contentious divorce, Lavette Mayes got into a heated argument with her soon-to-be ex-mother-in-law. A couple of weeks later, Chicago Police arrested her for aggravated battery.

Up until that point, her only interaction with the legal system had been reporting for jury duty. Her new business operating a school van service was thriving. She was renting a nice house, a place she and her two children could call home. Then, in 2015, a judge slapped her with a $250,000 bail — an amount that Mayes could not afford.

After she had spent 14 months in the Cook County Jail, the Chicago Community Bond Fund, a volunteer organization, helped Mayes make bail after a judge reduced the amount. By that point, though, her business had collapsed, she’d lost her home, and her kids were traumatized. “I lost everything,” Mayes, 46, said.

Increasingly, state policymakers are looking at defendants like Mayes and reexamining the purpose of bail. Six in 10 adults in U.S. jails have not been convicted of a crime. They are locked up awaiting trial, mostly because they’re too poor to post bail. They are legally presumed innocent, but many spend months and even years awaiting trial. Often, they feel pressure to take a plea deal rather than spend more time in jail.

And policymakers are proposing changes. In Illinois, lawmakers last month introduced proposals that could eliminate bail for first-time, nonviolent offenders or abolish cash bail. In Maryland, the Supreme Court last month chose to change the state’s cash bail system significantly. In January, New Jersey began a new system of pretrial detention, in which judges can only set bail as a last resort. Lawmakers in California, Connecticut, Maryland and New York also have legislation pending that would remake their states’ cash bail systems.

And last week, a federal appeals court heard arguments in a class-action suit that challenges the constitutionality of the bail system. It involves an indigent Georgia man who was arrested for walking on the road while drunk; his bail was set at $160.

Behind many of the proposals is a growing recognition that cash bail is inequitable and isn’t effective in assuring the people who are accused actually go to court to answer the charges, said Eric Sterling, executive director of the Criminal Justice Policy Foundation, a nonprofit that advocates for changes in the criminal justice system.

“A system where you are presumptively jailed unless you can buy your freedom is a form of pretrial punishment,” Sterling said.

Bail is set to serve two purposes: to guarantee that defendants show up in court and to protect public safety by detaining those deemed potentially dangerous.

Critics say the system penalizes the poor and contributes to mass incarceration because it jails presumably innocent people simply because they can’t afford to post bail and reinforces a cycle of poverty. It also increases recidivism rates, critics say, because “low risk” defendants who have served time in jail are more likely to commit crimes upon release. A 2016 Columbia University report found that defendants who’ve been charged bail have a 12 percent higher chance of being convicted and are 6 to 9 percent more likely to be charged with another crime.

But proponents of cash bail say the money or property involved in posting bail, often put up by family members, serves as a deterrent to skipping out of court appearances or fleeing the state or country. Without money on the line, they argue, there’s little incentive to stay and go to court.

“We’d love to know how you bring all these people back in when they don’t appear in court on these no cash bonds,” said Beth Chapman, president of the Professional Bail Agents of the United States, a trade association.

Some states, such as Kentucky, have begun experimenting with alternatives to bail, such as pretrial risk assessment, supervised release, drug treatment and ankle monitors. Meanwhile, local jurisdictions from Alabama to Ohio have begun changing their bail systems.

Starting in April, Arizona judges will be required to first consider releasing a defendant without bail, and if they set bail, to consider the accused’s financial circumstances and set the least onerous amount of bail, a change ordered by the state’s Supreme Court in December.

Meanwhile, state legislators there are debating four bills that would further amend the system, such as including risk assessments of defendants, enhancing judges’ ability to waive court fees for low-income offenders, and spelling out under what circumstances a judge may withhold bail. Last month, the Arizona Supreme Court also struck down a voter-approved provision in the state constitution that had eliminated the right for people accused of sex crimes to be considered for bail.

Two months in, New Jersey has seen the majority of people passing through its courts released on conditions that don’t include cash bail, such as a curfew, said Alexander Shalom of the New Jersey American Civil Liberties Union, which helped craft the state’s new legislation. Only a handful have been released on cash bail, while a couple of hundred have been held without bail, Shalom said. Meanwhile, he said, the jail population has been reduced somewhat.

Now, Shalom said, “people who are so dangerous don’t get out at all. And other people who aren’t dangerous can get out of jail without having grandma mortgage her house.”

The Case for Change

Changing the cash bail system can be complicated. Some states, such as Minnesota, have enshrined in their constitutions a right to bail.

“The nation needs to reform its bail system. But it’s not as simple as saying, ‘Eliminate cash bail,’ ” said Kevin Burke, a Minnesota district judge and past president of the American Judges Association, an organization of about 2,000 judges from the U.S., Canada and other countries and territories.

Under former U.S. Attorney General Loretta Lynch, the Department of Justice was critical of the cash bail system, arguing that it contributes to inequities and rewards the wealthy with their freedom while penalizing the poor.

Research has shown that housing pretrial defendants is expensive — as much as $120 a day for an inmate in a Philadelphia jail. And higher bail amounts are not associated with increased court appearance rates, studies have found.

There’s evidence that the bail system puts additional strains on jails, which already are overburdened in many parts of the country. According to the U.S. Bureau of Justice Statistics, 95 percent of the jail population growth since 2000 was because of an increase in inmates held in lieu of bail.

High-profile cases have highlighted the cracks in the system. Sandra Bland, an Illinois woman with a history of depression, apparently hanged herself in a Texas jail after being unable to post bail for a routine traffic stop in 2015. Her family won a $1.9 million wrongful death suit in September.

The debate over cash bail can obscure other problems in the pretrial system, said Insha Rahman, senior planner at the Vera Institute, a research organization that advocates for changes in criminal justice.

Typically, judges only get a few minutes to assess a defendant’s case, Burke, the Minnesota judge, said. So often, he said, judges set bail without knowing the full circumstances, which hamstrings them.

“The fear is I’m going to let somebody go and they’re going to go out and do something terrible, or they won’t come back, so I’ll set bail,” Burke said.

The ideal solution, Rahman said, is a system in which prosecutors, judges and counselors work together to ensure that pretrial release and detention are used judiciously and tailored to each defendant.

Bail as a Last Resort

One recent afternoon in arraignment court in Washington, D.C., the atmosphere was hushed. In one corner, men of all ages, with chains wrapped around their waists, hands and feet, waited for their cases to be called.

One by one, they stood before Magistrate Judge Sean Staples, who heard the charges against them, which included burglary, fraud, drug possession and assault with a dangerous weapon. Most were released on their own recognizance. They signed some paperwork, their chains were released, and they walked out the door.

Since 1992, at the height of the crack epidemic, Washington, D.C., courts have not imposed cash bail as a condition of release except in the rarest of instances. Instead, all defendants who are arrested and held before their initial court appearance are rotated through the city’s Pretrial Services Agency, where they are interviewed extensively to determine criminal history and to assess whether they pose a safety or flight risk or need substance abuse or mental health treatment. They also take a drug test at the agency’s on-site drug testing lab.

Those deemed to be low risk are released with tailored conditions, such as regular reporting to the agency by phone or in person, GPS monitoring or drug testing.

About 17,000 arrestees flow through the pretrial agency each year, according to Leslie Cooper, its deputy director. The District’s system is held up as a model among bail reform advocates. But others, such as Rahman of the Vera Institute, say the intensive amount of services it provides can feel too expensive or time-consuming to other jurisdictions. The agency’s budget for fiscal 2016 was $62.4 million.

Cooper said the city’s program, which is funded with federal dollars, is expensive because it has fixed costs that other jurisdictions would not have, such as its on-site drug testing lab.

Cooper said 90 percent of the people released without bail return to court and remain arrest-free, which is a sign that the system works.

“Bail is supposed to make sure that you show up for court,” Cooper said. “How much money you have in your pocket shouldn’t determine that.”