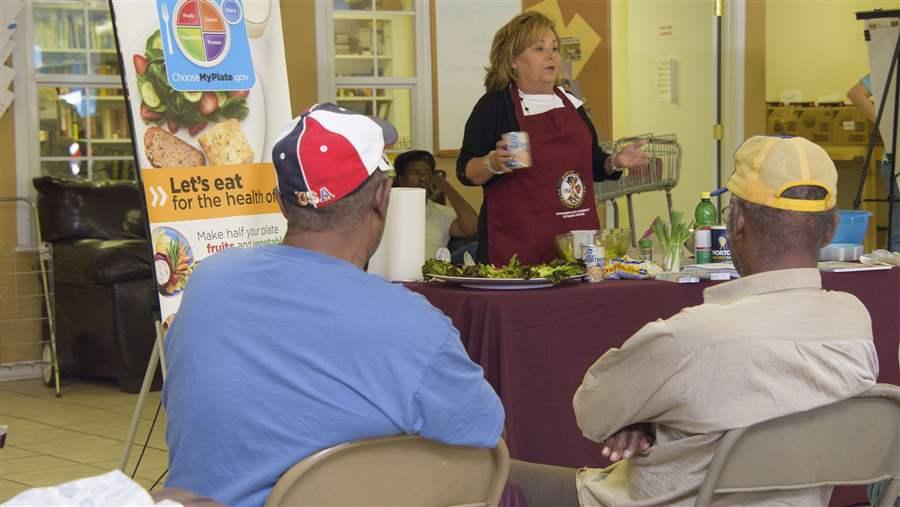 In a food pantry in Quitman County, Mississippi, Angie Crawford shows food stamp recipients a healthy meal they can make at home. There is a push across the country to make it so food stamps can’t be used to buy junk food.

At the food pantry she founded in poor, rural Quitman County, Mississippi, Angie Crawford spends her days teaching food stamp recipients how to shop, cook and eat healthy on a tight budget.

Then, at the grocery store, she sees people using food stamps to buy junk food, like big bags of potato chips in bulk. It troubles her.

As a nutrition educator for the federal Food Stamp Program — Supplemental Nutrition Assistance Program, or SNAP — Crawford is one of many public health officials across the country who say there should be more rules about how food stamp money is spent.

Twenty-three cents of every food stamp dollar is used to buy candy, desserts, salty snacks, sugar and sweetened beverages, according to a November report from the U.S. Department of Agriculture that for the first time revealed purchasing habits under the program in detail. The report, along with the election of President Donald Trump, who may be more inclined to tighten welfare rules, has reignited a long-standing debate on whether the government should allow people to use food stamps to buy unhealthy food.

Lawmakers in at least five states — Arkansas, Florida, Mississippi, New Mexico and Tennessee — introduced bills this year to ask the USDA for permission to ban the purchase of certain kinds of food or drinks, such as candy and soda, with food stamps. Since the USDA administers the program, states can’t create their own restrictions. But the department can give a state permission to conduct a pilot to test new ideas — something it has so far been unwilling to do.

Many public health and medical officials have supported the idea of restrictions on junk food for years, saying the program was meant to supplement nutrition but is instead feeding into the country’s unhealthy habits and worsening the obesity epidemic.

But usually when states consider the idea, they decide against it. Already this year, the bills in Arkansas, Mississippi and Tennessee have been withdrawn or killed.

The idea sounds appealing to people who don’t know much about nutrition or how the program works, said Ellen Vollinger, legal director for the Food Research and Action Center (FRAC), a nonprofit that aims to reduce hunger. The proposals often fail, she said, once lawmakers find out how costly and complicated they would be to implement, including how to determine which food items should be restricted and how to create a database and keep it updated as new products come out.

FRAC and similar groups that fight to end hunger, along with organizations representing merchants, are fervently opposed to restrictions, saying that along with being burdensome to implement, they are also unlikely to change eating habits.

The USDA has so far denied all requests from cities and states to ban the purchase of certain kinds of food using food stamps. In blocking Minnesota in 2004, New York City in 2011 and Maine in 2015, the agency said the proposals were not specific enough or wouldn’t provide a sufficient evaluation of success.

But Mary Mayhew, Maine’s Health and Human Services commissioner, and other officials think there may be more interest from the federal government under the Trump administration. Mayhew said the new administration “understands the importance of the integrity of these welfare programs.” She said she plans to resubmit the state’s request for a waiver soon.

Congress also is reconsidering restrictions as it considers changes to the U.S. Farm Bill of 2014. But at a hearing last week, the ranking minority member of the House Agriculture Committee, U.S. Rep. Collin Peterson, warned that the issue isn’t as straightforward as it seems.

“I think the underlying issue is all of us in the United States do a bad job of deciding what to eat,” the Minnesota Democrat said. “We could all use some guidance. But I’m not sure that the government is the way to provide that.”

In Arkansas, where about one in three adults is obese, state Rep. Mary Bentley, a Republican, introduced a bill this year to ban the purchase of unhealthy food using food stamps, saying she is concerned the state is “enabling” the increase in obesity and diabetes there.

But the bill failed to make it through the Senate after merchants complained it would be too costly to implement. Bentley said she is now working on changes to make the bill more specific.

That could mean restricting only certain types of unhealthy food. But it’s very hard to judge an individual food item for how healthy it is, Vollinger said, as it could be judged on sugar, fat or sodium content — which would all give you different results.

A 2007 USDA report cited a “slippery slope” when it comes to evaluating food items. For example, the report noted that soft drinks have less total fat, saturated fat and sodium per serving than some granola bars.

At the congressional hearing last week, Leslie Sarasin, president and CEO of the Food Marketing Institute, a trade association that represents grocers, told members that tens of thousands of food items would need to be reviewed to determine whether they should be restricted, including “an estimated 20,000 new products every year.”

In Maine, Mayhew said the results of the recent USDA survey underscore the importance of placing restrictions on the program.

In the state’s 2015 request to the USDA, it asked for permission to ban soda and candy from the program. In response, the agency asked the state to provide more information about how it would measure the success of its program, but never heard back, said Jalil Isa, a department spokesman.

Mayhew said she wouldn’t characterize what happened in that way. She said that the state and the USDA had “a circular debate” about the proposal, and it was clear to her that the department didn’t intend to grant Maine’s request.

Many public health officials, such as Jim O’Hara, director of health promotion policy at the nonprofit Center for Science in the Public Interest, say the best way to approach the issue is with a state or local pilot program.

“The question is how to do it in a sensible way that doesn’t damage the SNAP program, because the program is important for food security,” O’Hara said.

Public health organizations like the center for science, and groups aiming to end hunger like FRAC, are all advocates for food stamps. But the topic of restrictions has pitted them against each other. Public health organizations have pushed for restrictions, saying the current rules endorse unhealthy habits. But groups aiming to end hunger are against restrictions, saying they are too costly and complicated and wouldn’t change eating habits.

Their disagreement is fueled by distrust, said Marlene Schwartz, director of the Rudd Center for Food Policy and Obesity at the University of Connecticut.

Groups fighting against hunger often receive funding and resources from the food and soda industries, which may be hurt by the restrictions, Schwartz says. The organizations’ dependence on the industries may influence their advocacy, even subconsciously, she says.

“There is this relationship there that you don’t want to mess with,” she says. “That’s where it gets really tricky.”

FRAC, for instance, receives funding from many major food industry organizations or foundations, such as the General Mills Foundation. But Emily Pickren, a spokeswoman for FRAC, says donations from the food industry do not influence the organization’s position, and they are not the reason that the organization opposes the restrictions.

Rob Litt, a spokesman for General Mills, said the organization is committed to improving access to nutritious and sufficient food worldwide. “We have a long history of working closely with nonprofit partners to advance these mutual goals, not on advocacy initiatives.”

Schwartz is also fearful that some advocates for a ban on unhealthy food simply see it as a vehicle to cut the size of SNAP.

Vollinger and others say the way to get people to make healthier choices is more education for food stamp recipients and more incentives for them to make healthy choices. There is already federal money set aside to encourage people to buy healthy items with their food stamps, including one that increases the value of food stamps when they are used to buy fruits and vegetables.

In a recent paper, Schwartz suggests that the best way to find out if food restrictions make people healthier is to test the idea at the state level by giving people on food stamps the option of participating in a program with restrictions that would reward them for buying healthy food such as fruits and vegetables.

“My point is: it doesn’t have to be either-or,” she said. “It’s kind of like good parenting. You want to put restrictions. But at the same time, you want to promote the good behavior you’re looking for.”

The optional program would make the idea less offensive to opponents who think the idea of restricting food stamps is disrespectful because it doesn’t allow people to make their own choices.

But if the idea is really to change eating habits, Vollinger said restrictions are not the way to go. The average person stays on food stamps for a relatively short amount of time, she said, so it won’t bring long-term behavioral changes. It’s most common for food stamp recipients to receive benefits for about three to four years, according to the U.S. Census Bureau.

In Mississippi, where a bill was introduced earlier this year but then failed, everyone could benefit from a healthier diet, said Beth Orlansky of the Mississippi Center for Justice, an advocacy group that opposes the restrictions.

Traditional cooking in the state uses many unhealthy ingredients, such as bacon fat, Orlansky said, and people need to be taught how to cook with healthier ingredients.

It’s also harder to eat healthy if you live in high-poverty areas, where there often is limited access to fresh food. In Mississippi, counties with high rates of persistent poverty or high rates of people on food stamps tend to have higher rates of obesity and mental health problems, according to a recent study yet to be released by researchers at Mississippi State University and the University of Mississippi Medical Center.

Limited access to fresh food, coupled with eating fast food or food with a lot of calories or sugar, makes people predisposed to obesity, said Leslie Hossfeld, director of the Mississippi Food Insecurity Project at Mississippi State University and a co-author of the study. Placing restrictions on food-stamp purchases, she said, ignores the problem of access to healthy, affordable food.

Mississippi has the highest amount of food insecurity in the nation — one in five people have limited or no access to fresh food. In Quitman County, in the northwest corner of the state, Crawford said some people have to drive 20 miles one way to get to a grocery store with fresh food. About one in three adults there is obese.

She teaches her clients — many of them single parents — how to make good use of the food they do have, such as rubbing salt off canned green beans. She gives clients a healthy recipe they can make with the donations they receive from the pantry, and she teaches them the importance of preparing food ahead of time for the week.

“It’s trying to get them to see that it will take more effort and more time,” she said, “but it will be better in the end.”