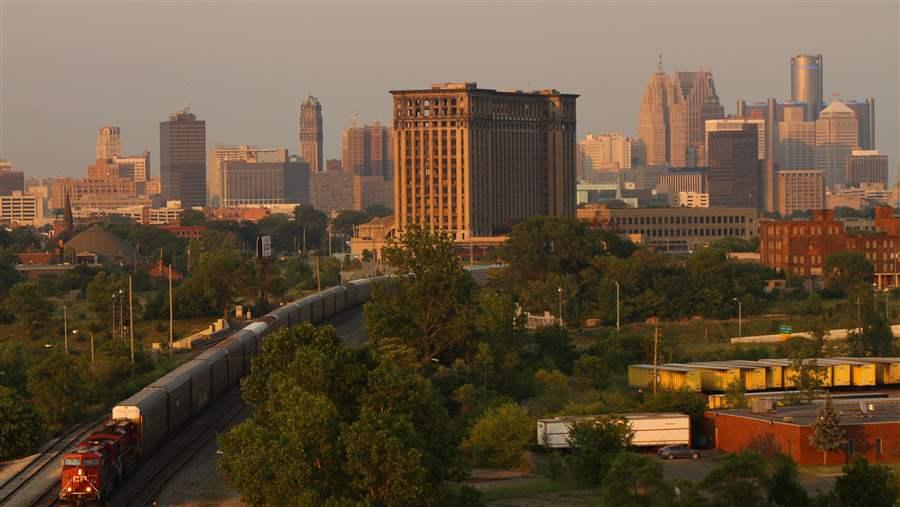 Detroit, Michigan. Service-delivery insolvency, which means the government is facing a crisis in managing police, fire, ambulance, trash, sewer and other essential safety and health services, contributed to Detroit filing for Chapter 9 bankruptcy protection in 2013.

First of two parts. The second part can be found here.

A new twist on the legal concept of municipal insolvency could change how some financially troubled local governments seek permission to file for federal bankruptcy protection.

Insolvency traditionally means a city, county or other government cannot pay its bills, and can lead in rare instances to a Chapter 9 bankruptcy filing or some other remedy authorized by the state that is not as drastic as a Chapter 9.

In recent years, the description of “insolvency” has expanded beyond a simple cash shortage to include “service-delivery insolvency,” which means the government is facing a crisis in managing police, fire, ambulance, trash, sewer and other essential safety and health services.

Service insolvency contributed to Stockton, California, and Detroit filing for Chapter 9 bankruptcy protection in 2012 and 2013, respectively. Neither city could pay their unsustainable debts, but officials’ failure to curb violent crime, spreading blight and decaying infrastructure was even more compelling to the federal bankruptcy judges who decided that Stockton and Detroit were eligible to file for Chapter 9.

“It is the city’s [Detroit] service delivery insolvency that the court finds most strikingly disturbing in this case,” federal bankruptcy judge Steven Rhodes said in his decision. “It is inhumane and intolerable, and it must be fixed.”

Without the “muscle” of bankruptcy protection, federal bankruptcy judge Christopher Klein said in allowing Stockton to reorganize its debt,  “It is apparent to me the city would not be able to perform its obligations to its citizens on fundamental public safety as well as other basic public services.”

In an interview, Rhodes said while Detroit officials had provided ample evidence of cash and budget insolvency, “the concept of service delivery insolvency put a more understanding face on what otherwise was just plain numbers.” It then became clear, he said, that the only solution for Detroit—as well as any insolvent municipality—was “fresh money,” including hundreds of millions of dollars contributed by the state, city and private foundations. “It is a rare insolvency situation—corporate or municipal—that can be fixed just by a change in management,” Rhodes said.

Demonstrating that services are dysfunctional could strengthen a local government’s ability to convince a judge that the city is eligible for bankruptcy protection, which sets in motion a court-approved exit plan to reorganize its debts. “With their cases focusing on not just a government’s ability to pay its debts, but also an ability to provide basic services to residents, Stockton and Detroit opened a path for future municipal bankruptcies,” said Genevieve Nolan, a vice president and senior analyst at Moody’s Investors Service.

East Cleveland, Ohio, was the first city to invoke service insolvency after Detroit.  In seeking permission from the state to file a Chapter 9 in April 2016, city officials cited East Cleveland’s lack of money to sustain basic police, fire, EMS and trash services. East Cleveland had an approved plan to balance its budget, but then-Mayor Gary Norton told the state the proposed cuts “will have the effect of decimating our safety forces.” State officials initially rejected the Chapter 9 request because it came from the mayor instead of the city council. Council members are trying to decide what to do next to keep the city from defaulting. Ohio has never approved a Chapter 9 filing.

Municipal bankruptcies are costly and rare; only about half of the states give cities permission to file a Chapter 9, many with conditions. A more common approach to avoid bankruptcy is for state officials to intervene in local government operations by appointing a temporary manager, receiver or control board to balance the budget, which may or may not include state aid. Twenty states have enacted laws allowing such intervention programs. The most recent high-profile example of this involvement by state officials was New Jersey’s appointment of an interim manager to run Atlantic City to stave off a Chapter 9.

Next: How a breakdown in service delivery could lead states to help distressed local governments without bankruptcy protection.