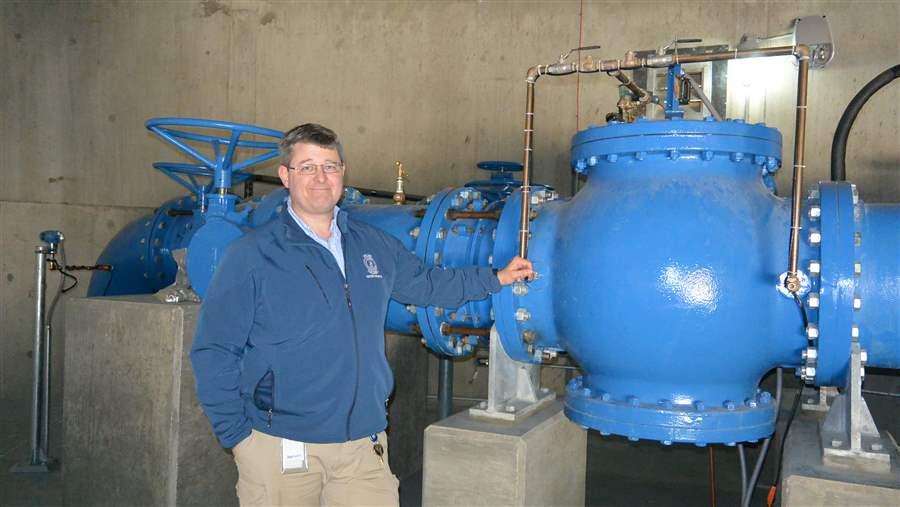 Jonathan Sherer of the Columbia, South Carolina, water department shows off a pump paid for with a $100 million municipal bond issue. Cities and states are wary of federal budget proposals that might curb the tax-free bonds.

COLUMBIA, S.C. — Structures built with municipal bonds stand out in this city. There is the Columbia Metropolitan Convention Center, and new parking garages for a revitalized restaurant and apartment district. Sleek, futuristic water towers loom on the edge of town and new modern pumps hum at the water plant where the oldest structures date to 1906.

Nationwide, the “muni bond” market has funded $1.65 trillion worth of projects for cities and other governments over the past decade. The borrowed money has paid for schools, roads, water and sewer systems, airports, bridges and other vital infrastructure.

“These aren’t shiny baubles. These are essential infrastructure,” said Democratic Columbia Mayor Steve Benjamin, who is in his second term. “This is a sacrosanct part of our taxing policy that has been in existence since 1913.”

But some Republicans on Capitol Hill want to end the tax-exempt status of muni bonds as part of broader changes to the federal tax code. That has many state and local officials worried.

A city’s ability to borrow depends on investors’ willingness to lend it money by purchasing bonds. And the tax-exempt status of muni bonds is part of what makes them so attractive to investors, especially high-income taxpayers looking to reduce their tax bills.

But exempting the bonds from federal taxes is projected to cost the U.S. Department of the Treasury as much as $617 billion in revenue over the next decade, according to the Tax Foundation, an independent tax analysis group. To many in Washington, recouping that money makes the tax exemption a tempting target.

U.S. House Ways and Means Committee Chairman Kevin Brady, a Texas Republican, said at a Heritage Foundation event in December that he thinks there’s “merit” to eliminating the deduction as part of a broader tax policy makeover that would lower rates. “The added benefit here is that the federal tax code will no longer subsidize higher taxes at the local level,” Brady said.

House Republicans released a tax policy blueprint last year that proposed eliminating most itemized deductions, including those taken for interest earned on municipal bonds. The proposal would keep intact deductions for mortgage interest and charitable giving. They are now drafting a new version of the plan. 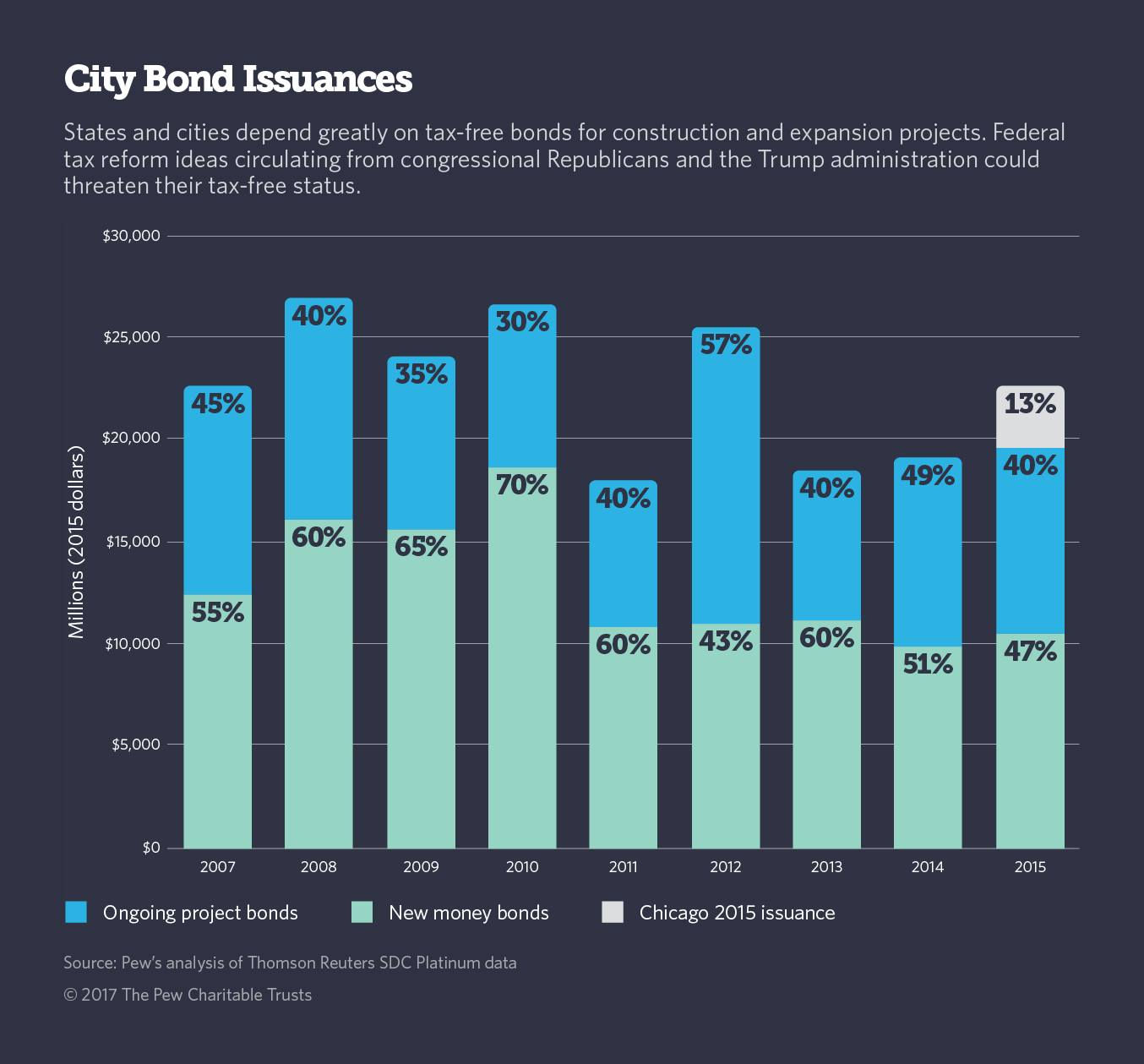 A Meeting With Trump

Even though they are called “municipal” bonds, states and other entities such as school districts and water authorities also rely on them. In 2016, there were $423.8 billion in new municipal bond sales, which include bonds issued by state authorities, water and sewer districts, local authorities, municipalities, counties, and colleges and universities.

The tax-free bonds come in three varieties. Most municipal bonds used to finance infrastructure projects are “general obligation” bonds, which means the governmental body that issues them puts its “full faith and credit” behind them. In other words, the city or county issuing the bonds pledges that its taxpayers will pay them off, no matter what happens. Cities and counties also issue “revenue bonds,” which they pay back using fees, such as tolls or public utility fees. Then there are “private activity” bonds, which are used mostly for housing and are secured by mortgages.

Shortly before President Donald Trump’s inauguration, Benjamin and other mayors of cities large and small met with the incoming president, who assured them that he opposed taxing any of the types of bonds. “He said he understood and would be fully supportive” of the tax-free bonds, said Larry Jones, assistant executive director of the nonpartisan U.S. Conference of Mayors. “However, we have yet to see how he would treat tax-exempt bonds in any budget proposal or tax reform proposal. We’ve been making our case on the Hill.”

Governors also have expressed support for keeping the bonds tax-exempt. “Municipal bonds remain a critical tool to financing the construction or improvement of schools, streets, highways, hospitals, bridges, water and sewer systems, ports, airports and other public works,” the National Governors Association said in a statement earlier this month.

Despite Trump’s assurances, muni-bond supporters have reason to be wary. During the presidential campaign, Trump’s economic advisers Peter Navarro and Wilbur Ross (since nominated to be secretary of commerce) questioned the wisdom of relying on tax-exempt bonds to rebuild the nation’s infrastructure, as Trump has pledged to do. Instead, they suggested awarding federal tax credits to private firms to do the work. The tax credits might not replace municipal bonds, but they could crowd the market for infrastructure investing.

Muni bonds also came under fire during the last major revision of the federal tax code, in 1986.

Frank Shafroth, director of the State and Local Government Leadership Center at George Mason University, was the National League of Cities’ director of federal relations during that debate. In a recent interview, he recalled the mad scramble to keep muni bonds tax-exempt as President Ronald Reagan and Republicans in Congress sought to eliminate or scale back the exemption.

Shafroth said awarding tax credits to private firms, as Trump’s economic advisers have proposed, “would not help with the vast number of projects” because, he said, those tax credits would most likely go to big, new projects, where they would be worth the most to private companies, not smaller efforts like road repair or school reconstruction.

Elizabeth Kautz, the mayor of Burnsville, Minnesota, just south of Minneapolis, emphasized that her city relies on municipal bonds to pay for street repaving and other basic maintenance, not to build shiny new stuff.

“It’s not like you do it once and it’s done,” Kautz said. “There are always improvements and maintenance you have to do.” She said the city has a fiduciary responsibility to citizens to make these improvements and to issue the bonds to finance them.

But critics of muni bonds argue that they make borrowing money for infrastructure projects so easy that some cities and towns unnecessarily construct things. If the cities had to pay outright, there would be more discretion on what projects to fund, the theory goes.

Scott Greenberg, an analyst at the Tax Foundation, said muni bonds may encourage cities to “overinvest in infrastructure, particularly if states and localities are also able to shift their tax burdens onto nonresidents.” That shift occurs when nonresidents buy the municipal bonds.