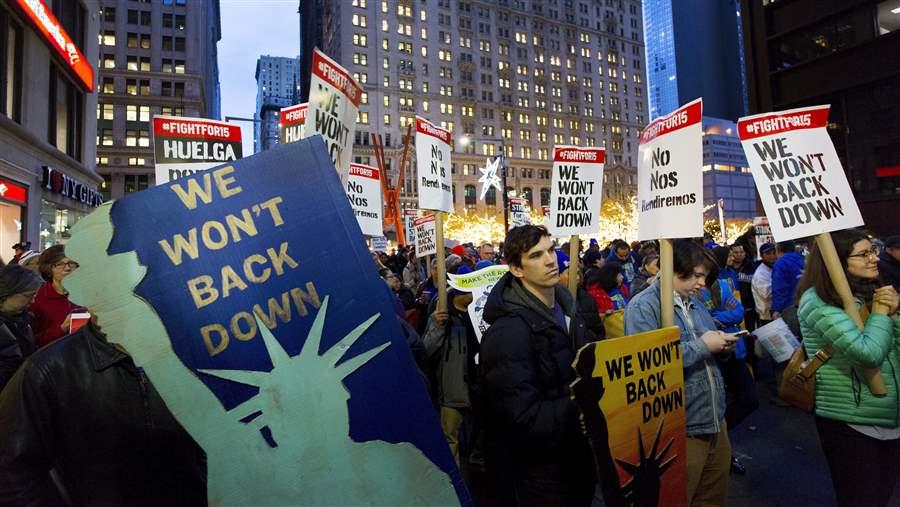 As more and more Americans hold nontraditional jobs that don’t have benefits attached — think freelance graphic designers or Uber drivers — cities and states are exploring ways to ensure those workers still have access to workers’ compensation, unemployment insurance, and other support such as help paying for health insurance.

Think tanks and some tech and labor leaders have called for truly “portable” accounts that travel with the worker no matter how he or she earns money. Washington state Rep. Jessyn Farrell, a Democrat, proposed a bill last week that takes a first step toward a more flexible, inclusive benefit system.

Her bill would require companies and people that act as brokers for independent contractors to put money toward a contract worker’s benefits. She says the bill maintains the flexibility employees and employers like about contingent work.

New York state legislators have considered allowing online platforms, such as home cleaning services, to pay into a benefit fund for workers who use their app or website. Members of the New York City Council have proposed charging riders a surcharge to fund benefits for taxi, livery cab, Uber and Lyft drivers.

Lawmakers say the world of work is changing and regulations need to keep up. Some 40 percent of American workers don’t have a full-time job, meaning they may not have a full set of benefits, making it harder to weather life’s shocks, from a family illness to a layoff.

“People are yearning and in deep need of additional economic security,” Farrell said.

But a number of factors will make it tough to structure benefits so that workers without a traditional job can access them. Requiring benefit contributions imposes new costs on businesses, customers or both.

While some companies that rely on nontraditional workers, such as Etsy and Lyft, say they support the idea of making benefits more portable and flexible, companies can be leery of forming something more like a traditional employer-employee relationship and taking on all the legal responsibilities and expense that entails.

Some “gig economy” workers already have benefits through another employer or a family member. But David Rolf, an official with the Service Employees International Union in Seattle and a founder of the “Fight for $15” movement to boost the minimum wage, says only systemic changes will make sure everyone has access to basic benefits such as workers’ compensation.

Today about 16 percent of American workers work for a temporary help agency, on contract as independent contractors, or hold an on-call position, according to a study from Harvard’s Lawrence Katz and Princeton’s Alan Krueger. That’s up from just 10 percent a decade ago.

So far, state portable benefits bills have focused on independent contractors, who comprise 8 percent of the workforce and are shut out of all kinds of benefit programs and worker protections. Their employers don’t contribute to workers’ compensation, unemployment insurance or Social Security, and they aren’t covered by labor standards such as the minimum wage.

About a year and a half ago, Rolf and venture capitalist Nick Hanauer published a manifesto in the journal Democracy that envisioned a new system. Labor standards and a basic set of benefits would apply to all work arrangements. Multiple employers would be able to pay into benefit accounts, which would follow workers from job to job.

And workers wouldn’t need to clock a certain number of hours each week to qualify. “You should get an hour’s worth of benefits for an hour’s work, full stop,” Hanauer says.

The Washington bill, which was shaped by advice from Rolf and Hanauer, would require people or companies that find work for and transfer payments to independent contractors — Uber, say, or a middleman who works with farm laborers — to contribute to a pool of money managed by an independent nonprofit. The broker might do that by charging consumers extra or by taking the money out of workers’ pay.

Contributions would be made at least monthly and would have to amount to either $6 per hour worked or 25 percent of the sum charged to the consumer, whichever is smaller. The money could be spent on paid time off, health insurance or other qualified benefits.

Any proposal to create benefits for independent contractors has to contend with the legal tension over how they are classified.

Many companies — particularly online labor platforms — operate in a murky area somewhere between being an employer and not being an employer. Courts have found that some companies are shirking their obligations to their workers by falsely calling them independent contractors.

In recent years, a growing number of lawsuits have been filed against companies by independent contractors seeking back wages and benefits, says Gerald Maatman, a lawyer for Seyfarth Shaw LLP who specializes in defending employers from such lawsuits.

These lawsuits can be extremely expensive. Last year, FedEx settled a misclassification lawsuit for $240 million, to be divided among 12,000 drivers who hadn’t been paid overtime or been reimbursed for expenses.

Some state attorneys general have also stepped up their efforts to go after companies suspected of misclassifying workers. Maatman says they’re motivated partly by their desire to capture payroll tax dollars.

Companies have responded by lobbying state legislatures to give them legal cover. Many of the 28 states that have legalized ride-hailing services, such as Uber and Lyft, included little-noticed provisions that said drivers who provide such services are independent contractors. Arizona has gone further and passed a law that says all people who find work through online labor platforms are independent contractors.

The state laws don’t stop workers from suing over benefits and protections owed to employees under federal law. But they make it much harder for workers to claim a right to state-run benefit programs, such as unemployment insurance and workers’ compensation, and to state minimum wage standards.

The Washington state bill tries to be neutral, saying that the proposed benefit scheme wouldn’t factor into the state’s legal determination of employee status.

Not so the portable benefits scheme recently floated in New York by tech industry lobbyists. The proposal would have allowed digital labor platforms to pay into benefit accounts for workers who use their platform — and would have classified those workers as independent contractors under state law.

New York Gov. Andrew Cuomo, a Democrat, put the proposal on ice last month when he announced he was convening a task force to consider portable benefits policy. State lawmakers are, however, still considering a bill that would legalize ride-hailing and allow drivers for ride-hailing companies to add a surcharge and remit it to an existing workers’ compensation fund for black car, or limousine, drivers.

Cities have been mulling the portable benefits idea, too. Last fall, members of the New York City Council proposed adding a surcharge to taxi, livery cab, Uber and Lyft rides, and putting the money into a benefit fund that would be administered by a nonprofit.

The proposal hasn’t made much progress since then. But Brad Lander, a Democratic councilman, says the city is working to help nontraditional workers in other ways. Last year, the city passed a law that requires entities to draw up a written contract with freelancers on work valued at $800 or more, and establishes penalties for not paying freelancers on time or not paying them the agreed-on amount.

In the future, the Council may consider expanding employment protections in city human rights law to cover independent contractors and freelancers, Lander said.

The benefit funds lawmakers are considering may only have a small effect on workers’ financial stability. Many of the workers affected are drivers, housekeepers and handymen; they’re low-wage workers who don’t tend to have great benefits even when employed full time.

The Washington bill sets its contribution level to about what a non-union, low-wage employer in Seattle pays in benefits, said Rolf, the union official. “Whether or not that adds up to a meaningful benefit depends in part on how much that person works,” he said.

He said the goal is to extend the benefits that low-wage employees typically have to their fellows who may be doing the same work but classified differently. “Right now there’s leakage going on because people who used to have jobs with health care and retirement plans and social insurance now are working as independent contractors,” Rolf said.

Care.com, a platform that helps families find housekeepers, nannies, tutors, and other caregivers, started setting aside 2 to 4 percent of each transaction fee into a “benefit bucks” fund for workers last fall. The money is converted into prepaid cards workers can use for a range of expenses, including transportation costs.

The benefits workers accrue are modest. A housekeeper working 20 hours a week at the average hourly rate for the site would earn about $395 a year, said Nancy Bushkin, vice president for public relations. That might cover six months of copays or gas. “That’s money she did not have,” Bushkin said.

Hanauer expects the Washington bill will face opposition from lawmakers on the left and right. But he thinks that regardless of whether it passes into law, the portable benefits concept is here to stay. “I don’t think this idea is going away, because I don’t think there’s any other way to fix the problems that ail the country,” he said.