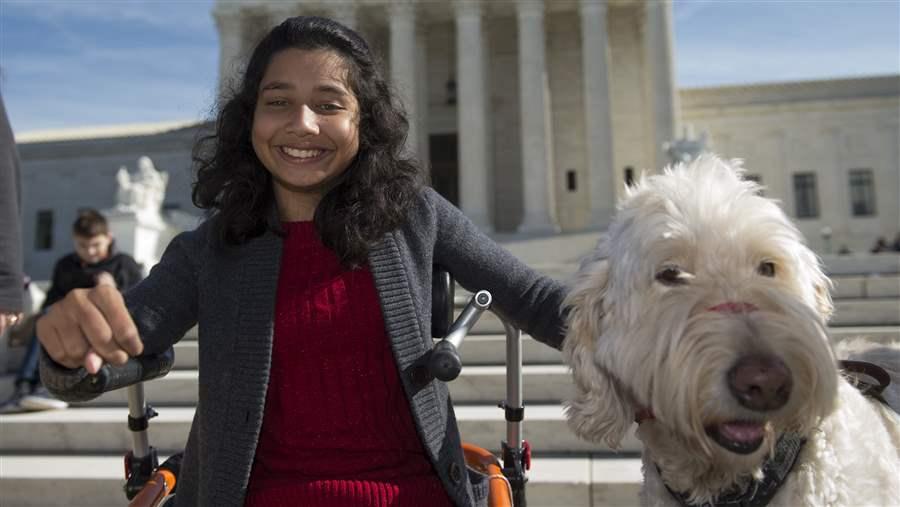 A Supreme Court decision in a case brought by a girl with cerebral palsy could make it easier for families to take their cases directly to federal court.

A Supreme Court decision issued Wednesday could make it easier for disabled students and their parents to sue schools under the Americans with Disabilities Act.

The case, involving a Michigan girl and her service dog, a goldendoodle named Wonder, is one of several the court is considering during its current term that school administrators worry could open schools to more litigation and prove costly for districts.

The suit was brought by the girl and her parents, the Frys, after her public school initially refused to let her bring her dog to school. The dog helps with opening and closing doors, turning lights on and off, and other tasks.

Families unhappy with the special education their children are receiving usually sue under the Individuals with Disabilities Education Act (IDEA), which requires that families exhaust their options in administrative hearings before going to court.

But in this case, the Michigan family sued under the ADA, taking the case directly to court where they could seek monetary damages for their daughter’s emotional distress.

The family did not question the adequacy of the services provided by the school, but argued that its actions constituted discrimination based on a disability. The school, however, said the girl’s needs were being met with an aide, and questioned the family’s ability to sue under the ADA.

In a unanimous opinion, the court sided largely with the Frys. It said families should not have to complete the lengthy administrative court procedure under IDEA when the remedy they seek would not be covered by the law.

The court noted that a number of laws apply to students with disabilities and that courts should consider the substance of a family’s complaint in determining where they can sue.

The case will now return to the 6th Circuit Court of Appeals.