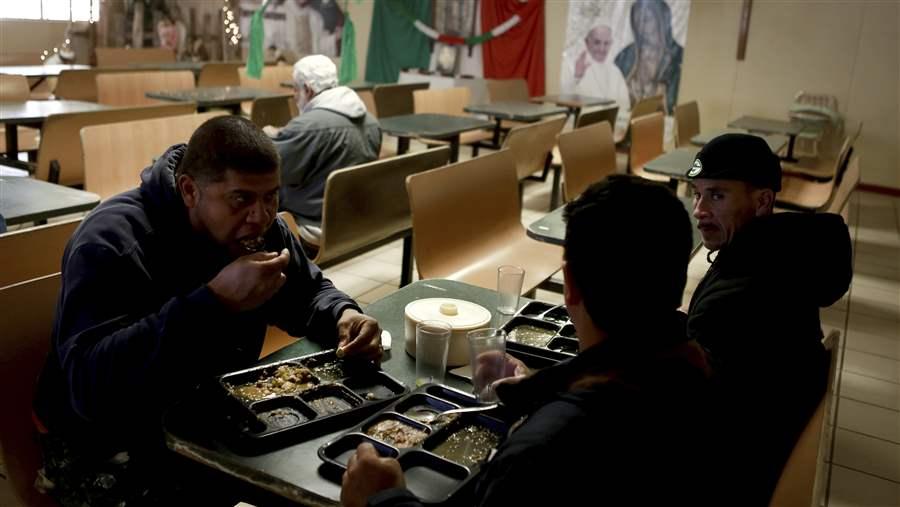 Migrants recently deported from the U.S. eat a meal at a migrant shelter in Ciudad Juarez, Mexico, last month. President Donald Trump this week ordered the Department of Homeland Security to deport any undocumented immigrant convicted of a criminal offense.

Under the new rules, immigrants convicted of any criminal offense are eligible for deportation, as well as anyone who has been charged with a criminal offense that has not been resolved, has engaged in fraud with a government agency, or has “abused any program related to receipt of public benefits,” or in the judgment of an immigration officer poses a “risk to public safety or national security.”

The orders also call for expediting removals and an end to the “catch and release” policy which allowed immigrants caught at the border to be released on their own recognizance prior to a hearing in immigration court.

Since 2014, the Department of Homeland Security has prioritized deporting noncitizens who pose a serious threat to public safety or national security. But President Donald Trump has pledged to immediately deport “the people that are criminal and have criminal records,” without regard to the crime committed. There are, he said, “a lot of these people, probably 2 million, it could be even 3 million” of them.

Immigration advocates say those numbers are inflated, and point to figures that indicate that even under the Obama administration, immigrants were being deported for minor crimes or for no crime at all. First-generation immigrants commit crimes at much lower rates than do U.S. citizens.

Further complicating matters: what constitutes a “criminal alien” is not defined in U.S. immigration law or regulations, and is used broadly, according to a September report by the Congressional Research Service.