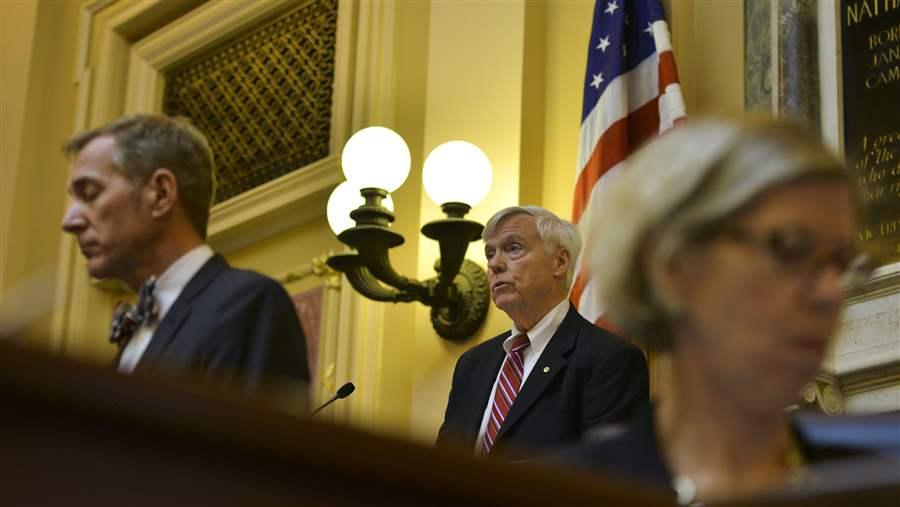 William J. Howell, the Speaker of the Virginia House of Delegates in Richmond. Howell last year urged the creation of the Virginia Commission on Employee Retirement Security and Pension Reform.

Virginia may become a leader among states in monitoring the fiscal strength of its pension funds.

The Virginia Commission on Employee Retirement Security and Pension Reform, created last year at the urging of Republican House Speaker William J. Howell, voted in December to propose two retirement system reforms to the legislature and three procedural changes to the Virginia Retirement System’s (VRS) board of trustees.

One would require the Virginia Retirement System  to regularly publish stress test analyses that evaluate investment and contribution risks over the next 20 years. These tests provide estimates of the future financial position of pension funds under various economic and investment return scenarios. This reform was based on work done in 2014 by the Society of Actuaries’ Blue Ribbon Panel on Public Pension Plan Funding.

The panel also recommended that data be published online detailing investment performance over the past 25 years, and that there be regular disclosure of private equity carried interest costs. These recommendations would formalize policies that build on the Virginia system’s existing practices and ongoing efforts to increase transparency on pension investments and cost.

Stress testing can provide a clearer understanding of potential economic swings and the associated costs or benefits. In recent decades, state pension funds across the country have shifted to more complex investments with greater exposure to financial market volatility. For example, many state funds lost 20 percent or more of portfolio value during the onset of the Great Recession. Over the past five years, average state pension fund returns have shown a wide range, from 17 percent to 1 percent.

If the stress testing recommendation is adopted by the board of trustees, Virginia would join California and Washington in requiring broad and routine sensitivity analyses on their public pension plans to assess their fiscal sustainability under multiple investment scenarios.

New rules from the Governmental Accounting Standards Board, the independent organization recognized by governments, the accounting industry, and the capital markets as the official source of generally accepted accounting principles for state and local governments, also require plans to estimate and disclose liabilities based on projected returns that are 1 percentage point above or below their assumed rate of return.

In addition to the stress testing proposals, the panel recommended several changes that would require legislative action, including increasing the default employee contribution rate for the defined contribution (DC) portion of the state hybrid plan and by accelerating automatic periodic increases in worker contributions, a practice known as auto-escalation. The commission also recommended creating an alternative retirement option—a DC-only plan similar to the state’s Optional Retirement Plan for Political Appointees (ORPPA) that would be available to new hires beginning in 2018.

The board is currently in the process of implementing the recommendations, and the legislature is separately considering the reforms during the current session.