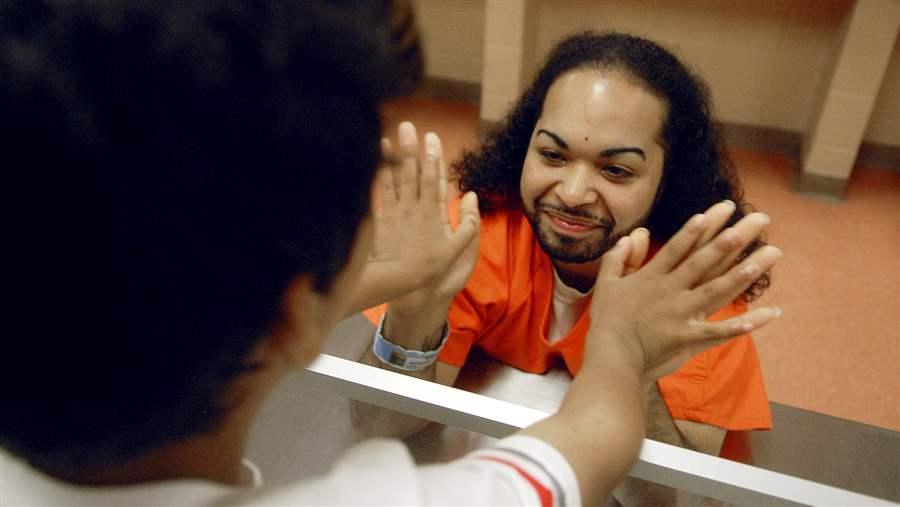 Inmate Carlos Diaz-Hernandez visits with one of his children at the Schenectady (New York) County Jail’s visitation room. Face-to-face visitation is returning to many of the nation’s jails.

The jailhouse scene from 2014 remains vivid in Rebecca Shlafer’s mind.

A 3-year-old girl came to the Washington County Jail in Stillwater, Minnesota, to see her dad. “She ran down the hall, jumped up in a chair and put her hand on the Plexiglas — and her father did the same,” said Shlafer, an assistant professor at the University of Minnesota’s pediatrics department who has studied jail visitation.

Hand to hand, they talked. “She was truly connecting with her parent,” Shlafer said. “It’s hard to describe.”

Jailhouse visits like this one between family members and inmates are starting to make a comeback, replacing a decadeslong trend of requiring families to use Skype-like video technology in which families dial in from a computer at home, a public library or inside the jail itself to talk to a loved one who is incarcerated.

The reason: Video technology companies came under criticism for charging high fees and for providing poor quality video connections. And evidence is growing that in-person visits help cut the likelihood that inmates will return to jail once they get out.

Counties in Texas and Mississippi as well as the District of Columbia are reinstating face-to-face visits. A few states, like New Jersey, are considering legislation to allow in-person visits again.

Advocates for prisoners praise the moves.

“Nothing can replace sitting with a parent and hugging a parent,” said Ann Adalist-Estrin, director of the National Resource Center on Children and Families of the Incarcerated at Rutgers University.

Although in-person visits remain the most common form of interaction between inmates and family members, the trend toward video visitation has been growing since the late 1990s. More than 500 jails and state prisons in 43 states have some sort of video visitation system, according to the Prison Policy Initiative. About 12 percent of jails have it, according to a study by PPI, which advocates for prisoners and their families.

A study of prisons in Minnesota published in the Criminal Justice Policy Review, a quarterly academic publication, found that inmates who had visits from their family, friends or counselors were much less likely to be convicted of another crime once they got out of jail. Of 16,420 inmates studied, recidivism rates for those who had visits of any kind from their families were 13 percent lower for subsequent felonies and 25 percent lower for technical violations, such as breaking parole.

“Psychology and common sense tells you that it’s better for the prisoners and families to sit across from each other and see each other, rather than talking through an iPad,” said Dallas County Judge Clay Jenkins. (In Texas, a county judge is the chief executive of the county and its top elected official.)

The Move From Video-Only Visits

Jenkins helped push Dallas County away from requiring only video visits. In September 2015, in-person visits returned and inmates are now guaranteed two visits a week as long as they are in good standing.

In April, the Adams County Jail in Natchez, Mississippi, dropped video visitation altogether and went back to in-person visits.

Jails usually have in-person visits for inmates in rooms with a clear plastic barrier, like Plexiglas, that separates the visitor and the inmate, and a telephone for talking. Some allow children to hug their parents or sit on their laps. Some have “family friendly” rooms with kid-sized chairs and books and toys; others just have tables and chairs in concrete rooms.

Staying in touch — in person or by video — can be costly.

More than one in three families go into debt to cover the costs of staying in touch with people who are incarcerated, including paying for video calls, telephone calls and travel expenses for trips to jails and especially prisons, which can be hundreds of miles away, according to a survey of families by the Ella Baker Center, a nonprofit that advocates against mass incarceration. Eighty-seven percent of the family members who pay for visitation costs are women, the survey also found.

The cost of a video call can be as much as $1 a minute, according to the Prison Policy Initiative.

Those fees have come under criticism for being a “kickback” for governments, too. Private companies contract with county jails and prisons for exclusive rights to provide video services, and a portion of the fees paid by families goes directly to the counties. Companies often bid against each other by offering governments a bigger cut, Dallas County’s Jenkins said.

But those limits are now in limbo with the election of President Donald Trump.

A week after Trump appointed Ajit Pai as chairman of the FCC, attorneys for the agency said they would no longer defend the telephone fee limits in a lawsuit brought by telephone companies that was heard this month in U.S. District Court in Washington, D.C., The Washington Post reported.

Last year under the Obama administration, the FCC had said it also was considering limits to the cost of video calls. Those limits are unlikely now.

In December, then-U.S. Rep. Tammy Duckworth, an Illinois Democrat, proposed federal legislation to limit the fees on video visitation calls and to ensure that in-person visits still occurred. The legislation did not pass, and Duckworth was elected to the U.S. Senate.

Ben Garmisa, Duckworth’s communications director, said the FCC move was “disappointing” and should be reconsidered.

“We know that most of the people who are incarcerated will be released, and that those who maintain contact with their families have better outcomes,” Garmisa said. “We should be doing everything we can to ensure that we reduce the likelihood of recidivism.”

Keeping regular ties with children is particularly important for the children of inmates, said Shlafer, who was part of the study of prisons in Minnesota. “The overwhelming majority of people who are incarcerated are getting out one day — and most have children,” she said.

The U.S. had about 2.2 million people incarcerated in 2015, the latest numbers available, according to the U.S. Justice Department. And more than half of them are parents. According to a Pew Charitable Trusts study at the start of the decade, 54 percent of inmates have children age 17 or younger. One in every 28 children in America (4 percent) has a parent who is incarcerated, according to the study. (Pew also funds Stateline.) That’s 2.7 million children with a jailed parent.

The rates are higher for some minorities, according to the study. One in nine African-American children (11 percent) and one in 28 Hispanic children (4 percent) have a parent in jail — compared to one in 57 for white children (2 percent).

Most of these parents and children do not connect regularly. For parents in state and federal prisons, that’s often because the prisons are so far away from where children and families live that visiting costs too much and takes too much time. Most people in state prison, 63 percent, are locked up over 100 miles from their families.

“Prisons tend to be out in the middle of nowhere, and it’s hard to get there,” said Elizabeth Gaynes, president of the Osborne Association, which provides video visitation locations for families in New York state. For instance, Albion women’s prison in northwestern New York state is about a six-and-a-half-hour drive from New York City, where many of its inmates are from.

“A daughter can try on her different prom dresses for her dad [in prison] to see which one he likes. You can introduce your mom or dad to your best friend or see the family pet,” Adalist-Estrin of Rutgers said. “Video can increase the ‘parental identity’ that maintains the role of the parent, even when they’re in prison.”

But jails and prisons should offer families both options, and not dictate what means of communication is better, Adalist-Estrin said.

“Everyone deserves a choice about how they get to see their loved ones. The families aren’t incarcerated, and they shouldn’t be punished,” said Adalist-Estrin. “I don’t believe the incarcerated person should be punished either. They’re already doing their time. But to deprive them of time with their families to me feels cruel and inhuman.”