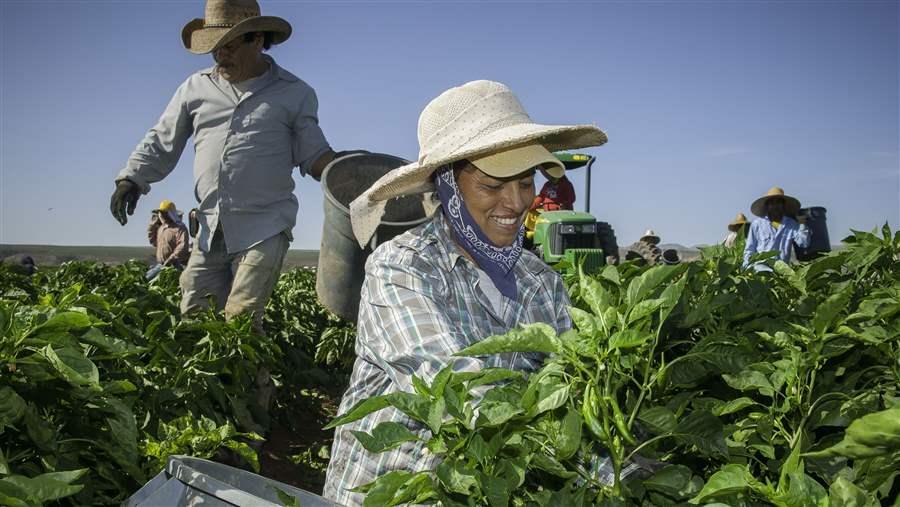 Farmworkers harvest chili in New Mexico. Farmers who rely on immigrant labor warn they could go out of business if they are forced to more thoroughly verify their workers are authorized to work in the U.S.

Legislators in several states are looking to crack down on illegal immigration in one of the few ways they can: by requiring businesses to more thoroughly verify that applicants are authorized to work in the U.S.

Amid President Donald Trump’s calls to build a wall along the Mexican border and to suspend immigration from seven majority-Muslim nations, the legislators see an opportunity for states to do their part.

They want to require businesses, or at least those that contract with state or local government, to run potential hires through the federal E-Verify system, an internet portal that checks whether people are authorized to work in the U.S. or are using fake documents to apply for jobs.

“The easiest and most economical way to address the issue of illegal immigration is to turn off the magnet that attracts people, and that’s employment,” said Iowa state Sen. Julian Garrett, a Republican who sponsored a bill that would require any business with more than 25 employees to use the system. If they don’t comply, they risk losing their business license.

Businesses already are required by federal law to check that those who have been offered a job are authorized to work in the U.S., either by examining proof of citizenship or documents such as a green card. But they aren’t required to use E-Verify. The legislation Garrett and lawmakers in several other states have proposed demands that employers use the federal system to try to vouch for their ability to work legally.

Whether to demand that businesses use E-Verify in their hiring has long been controversial. When Arizona became the first state to require it in 2007, the U.S. Chamber of Commerce sued. But the U.S. Supreme Court in 2011 upheld the right of states to strip business licenses from those that did not comply.

Nearly 700,000 businesses across the country use E-Verify, and 22 states have some kind of law on the books requiring it, including nine that require use by all private employers. The others require some public employers and government contractors to use it. 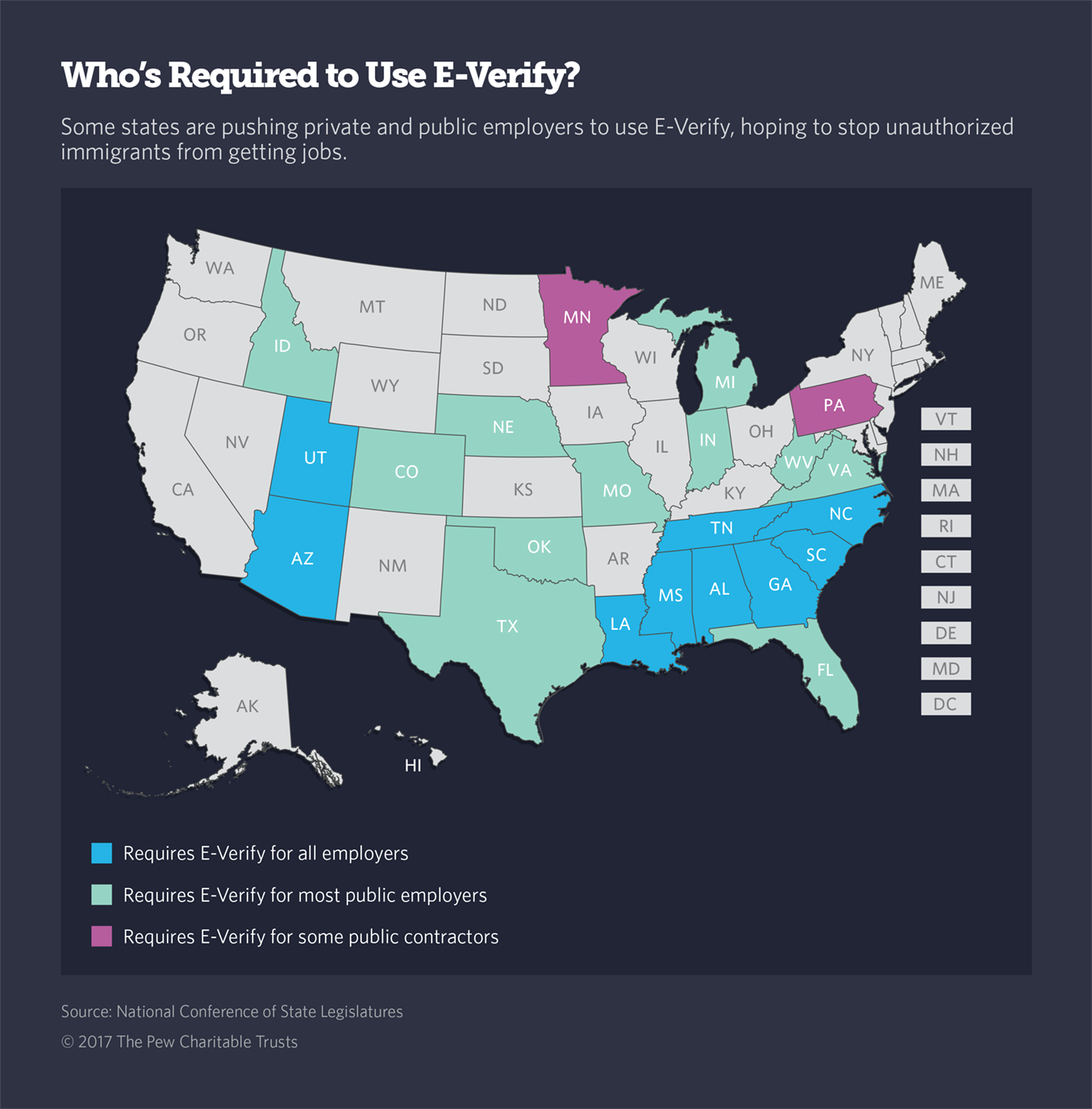 This year, lawmakers in Florida and Rhode Island, as well as Garrett in Iowa, have bills that would require private businesses to start running potential new hires through the system. Bills that lawmakers in Oregon, Texas and Kansas have introduced would extend the practice to government contractors or to state government.

But the proposals bring out a wide variety of opposition and a complex mix of concerns. Some church groups, the American Civil Liberties Union (ACLU) of Iowa and the League of United Latin American Citizens view them as discriminatory. Many employers in the agricultural industry say they may be unknowingly hiring unauthorized workers, but fear the industry would crash without foreign labor. Some businesses are wary of the legislation fearing a competitive disadvantage with businesses in nearby states and penalties that strip business licenses. And employers that hire people short term and don’t rely on computers fear a new burden will be imposed on them.

Sponsors of the bills say they are simply trying to turn off the immigration spigot. If the jobs available to the undocumented dry up, so will the incentive for people to come here illegally.

“If you’re not residing here lawfully, then you shouldn’t be offered the opportunity for employment. It’s just that simple,” said Rhode Island state Rep. Robert Nardolillo, a Republican who sponsored a bill that would require all businesses in the state to use E-Verify. He says it is especially unfair for those who have immigrated and naturalized legally after a long and expensive process to see those who haven’t get jobs.

But if the laws succeed as the sponsors hope, some businesses are worried.

More than 40 percent of farmworkers are foreign-born, and Kristi Boswell of the American Farm Bureau Federation said many of them are thought to be undocumented. She said farmers collect documents from workers but don’t always know if they are fake. If they have to start turning those workers away, but aren’t able to get the labor they need through a guest-worker visa program, the biggest concern, she said, is how farms will get the labor they need.

“We recognize the reality of our workforce,” she said. “But because of the flaws in the current immigration system we are in this position. We need access to foreign-born labor in the form of a visa program and an adjustment of [legal] status for people who are already here that are experienced workers on the farm.”

Tamar Jacoby, president of ImmigrationWorks USA, advocates for an expansion of legal immigration and guest-worker programs that the nation’s construction, restaurant and hospitality industries rely on. She thinks E-Verify should play a part in an expanded immigration program, but she is one of many people who question its reliability.

According to the Congressional Research Service, some authorized workers have been flagged as undocumented because of data entry errors or a failure to update their naturalization status or name change. When reviewing undocumented workers, the system is sometimes able to catch fraudulent documents that are tied to bogus Social Security numbers but it often fails to flag those tied to real numbers.

“No matter where you are in this country, you can buy fake documents,” Jacoby said. And employers fear asking too many questions could lead to a discrimination lawsuit. With E-Verify, she said, “You’re not sure you’re hiring totally legal people, but you at least know as much as government knows.”

Although there is a process to appeal if someone believes E-Verify has made an inaccurate determination, Veronica Fowler of the ACLU of Iowa said that places a time-intensive burden on people who need work.

Many of the bills lawmakers propose offer protection to employers who are found to have hired an undocumented worker, as long as the worker was cleared through E-Verify. But businesses that don’t use the system, at least in Iowa, would be penalized. Garrett, the Iowa sponsor, said it’s important that all businesses use E-Verify so some aren’t given a competitive advantage over others.

Some people in Iowa view the bill as an anti-immigrant measure, however. And it has yet to win the support of the business community.

Brian Carter with the Iowa Annual Conference of the United Methodist Church said some legislators want to make good on a campaign promise to crack down on illegal immigration before the next election. “It’s more political than anything,” he said. “It’s not really to help business.”

In the states that require private businesses to use E-Verify, the law hasn’t had the effects lawmakers were hoping for or that businesses feared.

According to a report from the libertarian Cato Institute, which compared the number of new hires in a state to the number of queries in E-Verify, new employees are being run through the system only about half of the time in four states that require private businesses to use the system.

Arizona, where the system was made mandatory in 2008, has had the requirement for the longest. Only about 58 percent of new hires were run through E-Verify there in 2014. In Mississippi, about 44 percent were. More than 97 percent of new hires in South Carolina were processed through E-Verify when the state audited businesses for compliance in 2012, but the rate has since fallen to 54 percent.

Jacoby of ImmigrationWorks USA said the laws can act as a deterrent. “Some of the people that used to apply with fake documents aren’t applying anymore,” she said. And that can make it more difficult for employers to find workers.

That was the case for many farmers in Georgia when the state required private employers to use E-Verify in 2011. Many seasonal workers passed through the state for opportunities elsewhere. The Georgia Department of Agriculture reported a shortage of more than 11,000 workers at the time, and a University of Georgia survey found that 78 percent of farmers had trouble finding workers that year.

“It was perceived that Georgia was hostile to immigrants,” said Tas Smith of the Georgia Farm Bureau. “Workers just didn’t show up. And when you got a crop in the field that has to get out in a certain amount of time because it’s perishable, you’re in a tizzy.”

Smith said some farmers tried to get laborers through a farmworker visa program, but having to supply transportation and housing was cost-prohibitive for most farmers, especially when workers may only be needed for a few weeks.

Now an entire block of the Southeast requires E-Verify, except for Florida, and Smith said the initial panic has eased.

Groups that represent large and small businesses in Arizona say despite initial concerns that using E-Verify would be burdensome, their members no longer complain.

But for the Arizona businesses that are not complying, the risk of being caught is low. Five years into the program, the state attorney general’s office cited just two cases against businesses, according to the Arizona Daily Star. The office of Republican Attorney General Mark Brnovich was unaware of any new cases filed since then.

Arizona state Sen. John Kavanagh, a Republican co-sponsor of the law, said he views the law as a success because he thinks many undocumented workers simply do not apply for jobs in Arizona anymore. He wanted state attorneys to be able to subpoena businesses for records, but the business community opposed that, leaving the law without the bite he would like. But he’s hopeful Trump will push for E-Verify to be used nationwide.

Another Republican co-sponsor of the law, former Arizona state Sen. Rich Crandall, cautioned legislators in other states against passing similar laws. “We didn’t improve things and we didn’t harm things,” he said. “So what did we really do besides simply pile more requirements on small and large businesses?”