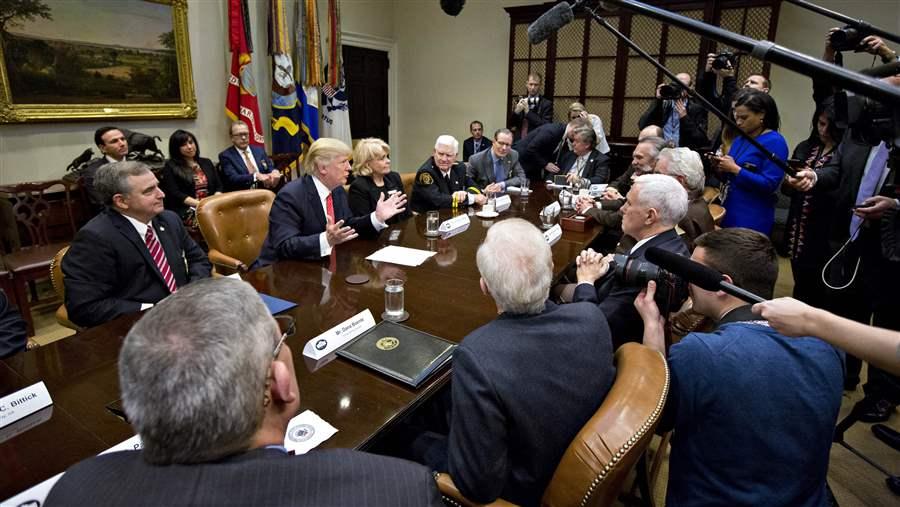 President Donald Trump meets with county sheriffs at the White House Tuesday. Many sheriffs say they can’t legally hold prisoners for possible deportation, even though it could expose them to possible sanctions under Trump’s executive orders.

Despite tough talk on sanctuary cities from the Trump administration, many sheriffs still fear that they lack the legal right to hold prisoners for possible deportation, even at the request of federal authorities.

Sheriffs, who operate 85 percent of local jails, are still waiting for courts to clarify the legality of “detainers,” or federal requests to hold prisoners for possible deportation.

President Donald Trump signed an executive order Jan. 25 promising to punish any “sanctuary jurisdictions” that “attempt to shield aliens from removal from the United States.” The order threatened cuts to federal funding and public shaming of “any jurisdiction that ignored or otherwise failed to honor any detainers.”

But the new administration in Washington hasn’t altered the legal landscape — at least not yet. Court rulings over the past several years have dissuaded even red-state sheriffs from honoring detainers, fearing that doing so would make them vulnerable to civil rights lawsuits.

“Sheriffs want to participate but we need to know our legal standing on this. We’ve been asking for this for years,” said Sheriff Leon Wilmot of Yuma County, Arizona. Wilmot said he spoke to Homeland Security Secretary John Kelly about the issue Monday on behalf of the National Sheriffs’ Association, which represents more than 3,000 sheriffs.

Wilmot said sheriffs need a definitive ruling from the U.S. Supreme Court. Sheriff Michael Bouchard of Oakland County, Michigan, said larger counties have the same concerns and want a court ruling, action by Congress, or an agreement that federal immigration agents will seek a judge’s signature on detainers to make them more legally acceptable.

Last year, a U.S. District Court in Illinois ruled that the detainers are illegal because they exceed the government’s authority to hold prisoners without a warrant. That followed a 2014 U.S. District Court order holding an Oregon county liable for damages after denying bail to a woman based on a detainer.

U.S. Immigration and Customs Enforcement (ICE), an agency of the Department of Homeland Security, generally issues a detainer request after receiving information about the arrest of an immigrant. The agency asks the local jail to hold the prisoner for up to 48 hours longer than it normally would to investigate the immigrant for possible deportation.

When considering whether to deport prisoners under Obama administration policies, ICE focused on those deemed to “pose a threat to public safety” because of gang activity or felony convictions unrelated to immigration status. Trump’s executive order expands that focus to include any criminal activity, fraud or abuse of public benefits, or failure to obey a court order to leave the country.

Local authorities in 43 states refused to honor more than 16,000 detainer requests from ICE from October 2013 to December 2015. Only in Alaska, Delaware, Hawaii, Maine, Montana, Vermont and Wyoming did local officials honor all requests, and detainers are relatively rare in those states.

“We just don’t feel we can legally hold people without something from a judge. This is a problem for sheriffs across the country,” said Sheriff Tim Morse of Jackson County, Kansas.

But some sheriffs say they think they already have the legal authority to detain immigrants for federal authorities. Sheriff Richard Jones of Butler County, Ohio, said he disagrees with fellow sheriffs who won’t honor detainers, though he is sympathetic to their position. The issue was hotly debated at the sheriffs’ association’s winter conference this month, Jones said.

“Every jurisdiction looks at it differently,” said Jones, who views failing to honor detainers a violation of federal laws requiring cooperation with the federal government. “I feel we have the authority to detain.”

Jessica Vaughan, director of policy studies for the Center for Immigration Studies, which wants to restrict immigration, agreed with Jones.

“There are a few [sheriffs] who have been sued who want a Supreme Court ruling.” Vaughan said. “Most don’t have any legal problem with it.”

Jones said he supports a proposal in Ohio that would criminalize cities or counties that adopt sanctuary policies. It also would enable crime victims to sue local officials if an unauthorized immigrant is released despite a federal detainer request. Similar legislation has been proposed in Colorado and could be introduced by lawmakers in Alaska and Maine.

Other states are gearing up to create their own bans on “sanctuary” policies that could ensnare sheriffs trying to walk the line between liability and cooperation.

In Texas, Republican Gov. Greg Abbott has vowed to withhold state funding from Travis County (Austin), which announced limited compliance with detainers. Texas lawmakers are considering a bill that would force local jails to cooperate with immigration authorities. A similar bill is pending in Iowa.

A bill in California takes the opposite tack. It would forbid local jails from holding prisoners for deportation.

Vaughan of the immigration center said a compromise may be possible if federal immigration authorities use an “administrative warrant” signed by supervisors because warrants signed by judges often are hard to get.

“There are no judges that would issue those routinely, and demanding them is another way of obstructing,” Vaughan said.

Mark Fleming, an attorney with the National Immigrant Justice Center who represented plaintiffs in a lawsuit that struck down detainers in the Illinois court case, said he’s not sure administrative warrants would satisfy the judge’s ruling.

“I do feel for these sheriffs. They’re like a ping pong ball caught in the middle of all this,” Fleming said. The judge in the Illinois case struck down all detainers as illegal, but the decision has not taken effect yet. The court gave the new administration in Washington time to decide whether to appeal.

Fleming’s lawsuit was brought on behalf of two people who were arrested and mistakenly detained at the federal government’s request, although one is a U.S. citizen and the other holds a green card.

Generally speaking, the sheriffs’ group supports Trump’s immigration policies. Greg Champagne, the group’s president, has applauded the president’s executive orders on immigration, saying they’ll help with the “burden associated with criminal illegal immigration and the subsequent impact on our communities.”

Trump invited sheriffs to a “listening session” Tuesday at the White House, and heard nothing but praise from the group.

“You’re about the rule of law. We haven’t seen that in many years,” said Sheriff Sam Page of Rockingham County, North Carolina. “You’ve got support from sheriffs around the country,” Page said.

Police chiefs who operate jails have the same liability concerns, said Darrel Stephens, director of the Major Cities Chiefs Association. Many will not honor the detainers without a warrant signed by a judge.

“A good many jails and even states have said that they will not honor the detainer requests without a warrant,” Stephens said. “This is not an unreasonable request and certainly doesn’t mean they’re unwilling to cooperate. They just want to ensure they are operating within the law,” Stephens said.