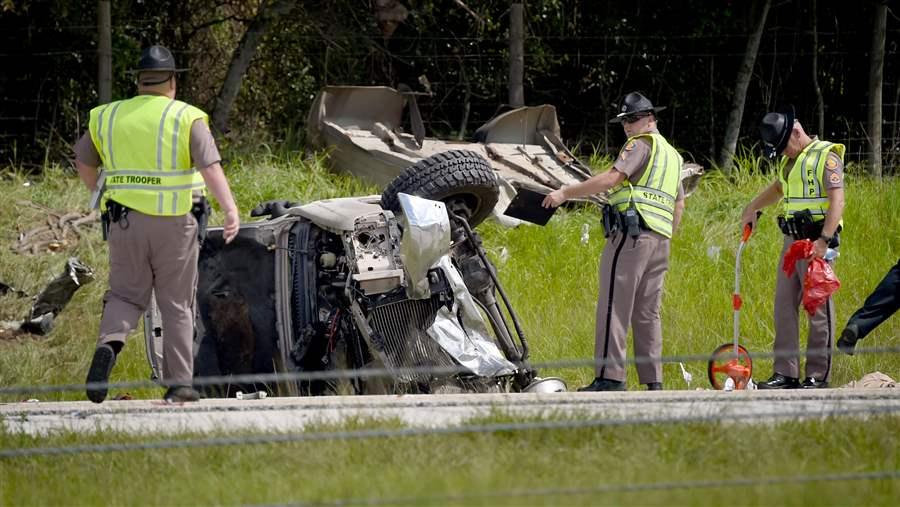 Florida Highway Patrol troopers investigate the scene of a deadly crash involving several vehicles in Lakeland, Florida, in June. Some states are using software to predict where serious crashes are likely to occur.

As Tennessee Highway Patrol Sgt. Anthony Griffin patrolled an area near Murfreesboro one morning in January 2014, he gave a young woman a ticket for driving her Geo Prizm without wearing a seat belt.

About four hours later, Griffin was dispatched to help out at the scene of a major accident a few miles away. A car had veered off the road, sailed over a bridge, struck a utility pole and landed in a frozen pond. When Griffin went to question the driver, who appeared uninjured, he was shocked to find it was the same woman he had ticketed earlier.

She told him she had been wearing her seat belt only because he had given her a ticket. She believed it had saved her life. And if it hadn’t been for new crash prediction software his agency was using, Griffin said he wouldn’t have been in that spot to issue her the ticket.

“I’m in my 21st year of law enforcement and I’ve never come across anything where I could see the fruit of my work in this fashion,” said Griffin, who is now a lieutenant. “It was amazing.”

As more and more states use “big data” for everything from catching fraudsters to reducing heath care costs, some highway patrols are tapping it to predict where serious or fatal traffic accidents are likely to take place so they can try to prevent them.

“This has a tremendous potential to help save lives by pinpointing where the crashes occur and digging deep into the data and using that to make decisions,” said Kara Macek, spokeswoman for the Governors Highway Safety Association, which represents highway safety offices.

Tennessee has been a leader in the use of predictive crash software, and some other states are following in its footsteps.

“We’re always looking for ways to reduce our fatalities and get the most bang for our buck,” said Col. Tracy Trott, the Tennessee Highway Patrol’s commander.

The Tennessee program, launched statewide in late 2013, cost $263,000 to set up and was funded by federal grants through what was then called the Governor’s Highway Safety Office. Staffing and maintenance runs about $125,000 a year.

The program’s software merges every crash report in the state, weather conditions, information about special events and traffic enforcement citations. It produces a map that shows the likelihood of a serious crash or fatality within 6-by-7-mile areas in four-hour increments every day.

Troopers can check the map in their cars and patrol those targeted areas when they have the time. Supervisors also use the data to put together enforcement plans for the month, including where to set up safety belt and sobriety checkpoints.

Having a police car sitting in the median or on the shoulder can slow traffic and be a deterrent to speeding and reckless driving, officials say. At the very least, a trooper would be nearby if there’s a crash.

Patrick Dolan, who manages the highway patrol’s statistics office, said his agency’s average response time to crashes dropped nearly 33 percent between 2012 and 2016, from 37 to 25 minutes.

Traffic fatalities in Tennessee fell 3 percent between 2013 and 2015, from 995 to 962, compared to a 7 percent increase nationally. Federal officials say more people were on the road, the economy improved and gas prices dropped.

Last year, traffic fatalities in Tennessee spiked to 1,042, an 8 percent increase that mirrored the national increase during the first nine months of 2016, the most recent figure available. Tennessee officials say it’s too early to know whether they need to rework the predictive model or if the spike is related to other factors, such as more traffic on the roads.

Trott said he thinks the predictive software certainly has helped with response times and enforcement efforts by putting troopers in the right place at the right time.

“It’s not the silver bullet that is going to solve every problem on traffic safety,” he said. “But it’s another tool, an effective one, to give our people an idea of where they need to be and what they need to be working on to help prevent some of these crashes or at least be there quicker.”

More States On Board

So far, only a small number of highway patrols are using predictive crash analytics. Macek of the national highway safety group said the major reason is cost.

“State law enforcement is strapped for cash right now,” she said. “It requires a great deal of money and people and strategic thinking.”

But Macek anticipates more states will come on board. “There’s an appetite for it, for sure. The Tennessee program has gotten a lot of interest from other states.”

One of them is Missouri, which decided to set up its own version after officials met with their counterparts in Tennessee and toured their data center operation.

The Missouri State Highway Patrol is gathering data and running tests on computer models and plans for troopers to use the new tool in the field by January 2018, said Mark Ritchey, director of the agency’s statistical analysis center.

Ritchey said his agency got a $148,000 federal grant to start up its program, buy software from a vendor, and run the system for three years. He hopes it will reduce fatal crashes in his state, which jumped from 683 in 2013 to 850 in 2016, according to the latest tally.

The program will pull together the time, day and location of every crash in Wisconsin, as well as the factors that contributed to the crash. The agency will use the information to deploy troopers to areas that have had crashes with fatalities or serious injuries.

Teasdale said his agency won’t need to buy the software from a private company, as Tennessee and Missouri did, because it can develop it in-house, with help from the University of Wisconsin.

Indiana State Police decided to take a different approach, and are making their predictive crash analytics program available to the public, as well as troopers.

The online map pinpoints where a crash is likely, ranging from a very low to a high probability. It also highlights prior crash sites and displays information about the date and cause, whether EMS was called, if there was a fatality, and if drugs or alcohol were involved. As of late January, the site had nearly 4,800 page visits.

“We’re using this to better inform the public about potential hazards,” Simpson said. “Maybe someone will click on it and decide they want to take a different route to work or allow more time.”

Simpson said it’s too early to determine the program’s effectiveness, but his agency plans to do a complete analysis and check the algorithm to make sure it’s accurate.

Highway patrol officials admit it can be a hard sell getting some veteran troopers to use the predictive technology because they figure they don’t need an algorithm to tell them where the crash hot spots are.

Tennessee’s Trott said veterans do know a lot about crash spots, but troopers in his state often move from county to county, so they may not have historical knowledge about crashes in all those areas.

“The biggest challenge is not the money. It’s not execution,” Trott said. “You’ve got to sell it to your department that it’s going to be a benefit and it can help them be successful.”

That’s what the Wisconsin State Patrol is hoping for when it launches its predictive crash model, Teasdale said.

“Every trooper wants to know they’re making a difference. If they can see results, it gives them a sense of accomplishment and a sense of purpose.”