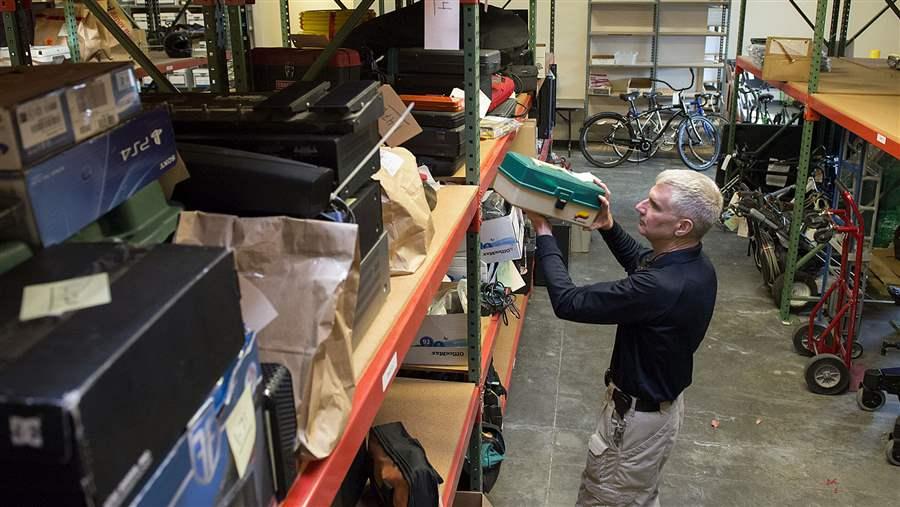 Evidence technician Kit Abernathy of the Vancouver, Washington, Police Department looks over items seized under the civil asset forfeiture laws. As proceeds from civil forfeiture have swelled, so has controversy surrounding the laws.

When Sean Devonish and Jeremy Keets, two friends from Indianapolis, set out for a weekend trip to Cincinnati in 2013, they anticipated a few relaxing days out of town. Instead, they wound up having to hand over $16,500 in cash to officers from the Hamilton County Regional Narcotics Unit — without ever being charged with a crime.

The two men were pulled over on Interstate 74 for a lane violation and consented to a search of their vehicle, which is when the officers discovered the $16,500 — money that was intended for gambling at the casino and shopping in the city, according to their attorneys.

Hamilton County is a hotbed of interstate drug activity, and the Regional Narcotics Unit makes regular drug busts along the highways heading into and out of Cincinnati. In this case, however, officers seized the money based on the mere suspicion — without evidence — that it was tied to criminal activity. After county prosecutors proceeded with a civil forfeiture case, a county judge determined the money had no connection to a crime. The $16,500 was returned to Devonish and Keets, but only after two years of court battles and several thousand dollars in attorneys’ fees.

Civil asset forfeiture, a practice that allows law enforcement to permanently seize property without pressing criminal charges, funnels hundreds of millions of dollars into state and federal coffers every year. According to a 2015 report by the Institute for Justice, a nonprofit civil liberties law firm, net proceeds from civil forfeitures across 14 states more than doubled between 2002 and 2013, jumping from around $100 million to $250 million. Net assets in forfeiture funds within the U.S. Department of Justice and the U.S. Treasury Department exploded during this time as well, climbing from less than $1 billion in 2001 to nearly $4.5 billion in 2014.

As proceeds from civil forfeiture have swelled, so has the controversy surrounding the practice. A number of states are considering changes — from creating tracking systems that promote transparency to effectively banning forfeitures without a criminal conviction.

In many states, police only need to establish probable cause in order to seize property. During the judicial process, civil charges are brought against the property itself, which means the owner has no guarantee of attorney representation in court. Costly attorneys’ fees can easily exceed the value of the seized property.

A majority of states require forfeited property to be connected to criminal activity by a preponderance of evidence — a relatively low bar in the civil court system. Advocacy groups across the political spectrum — from the left-leaning American Civil Liberties Union to the libertarian Institute for Justice — argue that property owners who face civil forfeiture suits are denied one of their most basic rights: the presumption of innocence until proven guilty.

Last month, Republican Gov. John Kasich of Ohio signed a measure barring forfeitures under $15,000 without a criminal conviction. Between 2010 and 2012, proceeds from civil forfeiture in the Buckeye State totaled nearly $26 million.

Research suggests that most forfeitures fall well below the $15,000 threshold. A review of forfeitures in 10 states by the Institute for Justice found that the median value of forfeited property ranged from about $450 in Minnesota to $2,050 in Utah. The requirement of a criminal conviction affords property owners greater protections when their property is seized, such as the right to an attorney and a higher burden of proof — “beyond a reasonable doubt” — than in civil suits.

Under the new Ohio law, the prosecutor in a civil forfeiture case has to prove by “clear and convincing evidence” that the seized property was connected to criminal activity. Clear and convincing evidence is the highest bar for burden of proof in the civil court system, higher than the less stringent “preponderance of evidence” threshold that Ohio courts required in the past.

Ohio state Rep. Robert McColley, who cosponsored the bill, said it would restore the fundamental judicial right that defendants are innocent until proven guilty.

“The law was really aimed at what I viewed as an unfair and inequitable judicial process that was tilted heavily in favor of the state,” said McColley, a Republican.

By focusing on the judicial process, he added, the new law aimed to avoid limiting the tools available to law enforcement. But some in the law enforcement community oppose such changes.

“We think it is counterproductive — it takes away a valuable tool from law enforcement,” said Michael Weinman, the director of government affairs for Ohio’s Fraternal Order of Police. “One way we were fighting the heroin epidemic, which kills thousands of people a year in Ohio, was taking away [drug dealers’] profits. Now that tool is gone.”

In Texas, a proposed bill would require a criminal conviction in all cases of forfeiture, unless a defendant cannot be contacted or fails to appear in court. If signed into law, Texas would join a handful of states that have effectively banned civil forfeiture, including New Mexico and Nebraska.

“My responsibility as an elected official is to protect the rights of the people,” said Republican state Sen. Konni Burton, who introduced the bill. “The government should have to secure a criminal conviction before property is forfeited. Anything less is unacceptable."

But the Texas bill faces a tough road ahead. Recent attempts to reform civil forfeiture in Texas have failed, including measures that were less far-reaching than Burton’s proposal. In 2015, Burton introduced a similar bill that died in committee.

Some states are focusing on greater transparency and oversight of civil forfeitures. In Mississippi, state Rep. Mark Baker, a Republican, is pushing a bill that would require the state Bureau of Narcotics to create and maintain a searchable website that tracks seized property. Under the state’s current system, comprehensive data on civil forfeiture is virtually nonexistent. According to the Institute for Justice, agencies in Mississippi “are not required to track or publicly report forfeitures or expenditures … leaving the public and lawmakers in the dark.”

Baker’s proposal grew out of a task force he chaired last year. Some members of the panel are pushing for additional changes. André de Gruy, the state’s public defender, issued his own list of recommendations as a supplement to the ones that formed the basis of Baker’s bill. His most significant recommendation is the creation of a central fund for forfeiture proceeds managed by the Department of Public Safety.

“The central fund is more consistent with the direction the state is moving in fiscal management,” de Gruy said in an email. Most property forfeitures occur in counties with interstate highways, he said, which concentrates funding from forfeitures to a few areas of the state. A central fund would be “more equitable to all law enforcement and all local communities.”

De Gruy suggested that at least 80 percent of forfeiture proceeds in the central fund go toward policing, but his idea for the fund was opposed by some in law enforcement. The Mississippi Sheriffs’ Association did not respond to a request for comment.

Similar efforts to establish tracking systems in other parts of the country, however, have been meet with resistance. In New Jersey, lawmakers overwhelmingly approved a bill that would require law enforcement to provide detailed information about the time, location and circumstances of seizures. It would also require prosecutors to publicly disclose information on the adjudication and final disposition of forfeiture cases. On Monday, Republican Gov. Chris Christie vetoed the bill, recommending instead that prosecutors produce a quarterly review of seizures across the state.

Meanwhile in Kansas, a requirement that police report civil forfeitures is in jeopardy after an audit found that few agencies were complying with the mandate. Members of the Kansas Legislative Post Audit Committee were left with two choices: strengthen the reporting system or scrap it. A bill to repeal the reporting requirements was pre-filed in the Kansas House and Senate last month, though not without pushback.

A federal program known as “equitable sharing” represents another barrier for civil forfeiture opponents. The program allows state and local law enforcement to partner with federal agencies to seize property and split forfeiture proceeds, with up to 80 percent being returned to the states. In states with strong protections against civil forfeiture abuse, law enforcement can utilize equitable sharing to circumvent these laws and bring in significant amounts of money.

Missouri, for example, has some of the strictest state forfeiture laws in the country, requiring a criminal conviction or guilty plea in nearly all cases. Additionally, proceeds from state forfeitures must go toward education, not back to the law enforcement agency that seized the property. In Missouri, state forfeitures between 2000 and 2013 totaled a mere $1.5 million — a fraction of the amount forfeited in most other states. During the same period, however, Missouri law enforcement agencies brought in more than $126 million through the U.S. Department of Justice’s equitable sharing program.

The U.S. Department of Justice has set some restrictions on equitable sharing in recent years, including a requirement that limits adoption forfeitures and blocks seizures that involve federal law enforcement only after the fact. But the federal government does not appear likely to pass comprehensive legislation on civil forfeiture any time soon — especially given the support of civil forfeiture expressed by Republican U.S. Sen. Jeff Sessions of Alabama, President Donald Trump’s pick for attorney general.