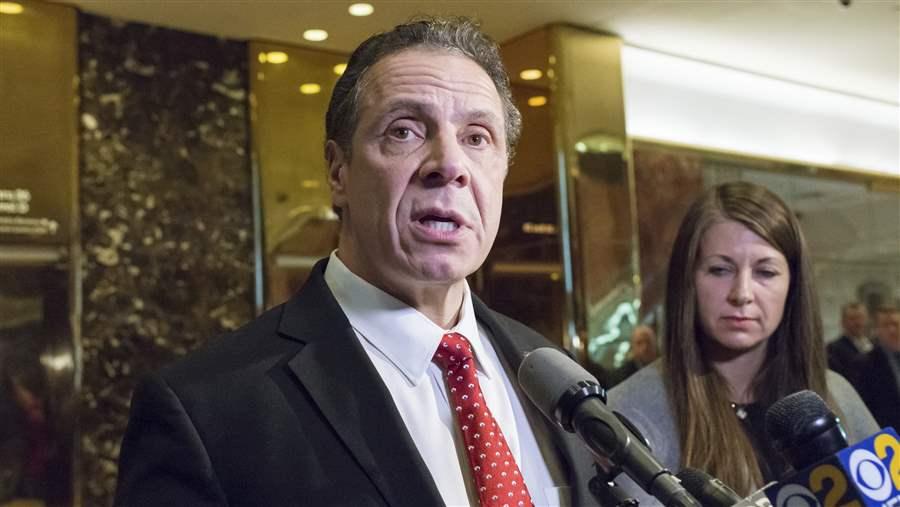 Democratic Gov. Andrew Cuomo of New York talks to reporters in January after telling then-President-elect Donald Trump that scrapping the federal tax deduction for state and local taxes would hurt taxpayers in his state.

Editor's Note: this story has been corrected. The Tax Policy Center projected savings of $1.3 trillion, not billion.

When U.S. Senate Democratic Leader Chuck Schumer of New York filed his 2014 federal tax return, he got to deduct about $62,000 from his taxable income — the amount he and his wife paid in state and local taxes.

Schumer is an example of the kind of taxpayer who benefits most from the ability to reduce federal income tax liability by deducting state and local taxes paid the year before. And he and millions of others stand to lose billions in tax benefits overall if a proposal being considered by President Donald Trump and the Republican-led Congress to scrap or reduce the deduction is enacted.

Like millions of higher-income taxpayers in high-tax states, Schumer itemizes his deductions rather than taking the standard deduction. To those taxpayers, the state and local write-off is worth a lot.

Critics of the deduction say it acts as a federal subsidy to states like New York that have higher income and property taxes. But lawmakers in those states worry that without the deduction, which also acts as a subsidy to higher-income residents, they might be pressured to lower taxes overall, which would put pressure on state revenue.

In New York, elimination of the state and local tax deduction would result in a $14.8 billion federal tax increase, which would translate to a $4,500 higher tax bill on average for New York families, according to a report prepared for Democratic Gov. Andrew Cuomo in 2013.

“This represents more than a 30 percent increase in the federal tax bill for affected New Yorkers,” the report said.

Justin Goodman, a spokesman for Schumer, said the senator opposes cutting or eliminating the deduction because it would “result in a significant tax increase on middle-class New Yorkers.”

Cuomo, who met with Trump in New York City shortly before Trump was inaugurated last month, warned the incoming president of the dangers of a repeal for taxpayers in Trump’s home state.

“There’s a proposal being discussed that would end the deductibility of state and local taxes … which would be devastating on the state of New York, California, et cetera,” Cuomo told reporters after the meeting.

Cuomo said Trump was knowledgeable about the situation, but gave no indication whether his fellow New Yorker was sympathetic to keeping the deduction.

Eliminating the deduction would boost the federal treasury by almost $1.3 trillion over a decade, according to a study by the Tax Policy Center, a joint think tank of the progressive Urban Institute and the moderate Brookings Institution. Limiting the deduction claimed by tax filers would raise less revenue, depending on the size of the cap.

The 10 counties that benefit the most from the deduction are in California, Connecticut, New Jersey and New York, the nonpartisan Tax Foundation found in 2016, and they are some of the wealthiest in the nation.

The studies estimated the tax increase based only on a change to the state and local deduction. Other proposed changes in the federal income tax circulating in Washington could partially offset any increases caused by eliminating the deduction by lowering the personal income tax or business tax rates.

Maya MacGuineas, the president of the bipartisan Committee for a Responsible Federal Budget, called the state and local tax deduction an “expensive tax break.” If it was eliminated, she said, the federal government would have a significant amount of cash that “might be plowed back into more comprehensive tax reform” or “be used for anything.”

She said states where taxpayers benefit greatly from the deduction will fight hard to keep it. But, she said, it is not much of an issue in low-tax, low-income states that are essentially subsidizing high-tax states like California and New York.

The federal deduction comes into the calculations lawmakers in states with wealthy residents make in deciding whether to raise state income taxes.

They know that if they raise state income taxes by $1 on their wealthiest residents who pay the top federal rate, the federal deduction will give them a “rebate” of 39.6 cents, said Tyler Evilsizer, research manager at the budget organization. That means every dollar of state income tax revenue that the state reaps will cost those taxpayers only 60.4 cents.

Should the deduction go away, it may be harder for state lawmakers to raise income taxes on the rich. Likewise, it would put greater pressure on local officials to hold down property taxes.

In California, taxpayers deducted $96.6 billion from their federal returns in 2013 for state and local tax payments — nearly one-fifth of the national total, according to the Tax Policy Center.

The possibility of losing the deduction is one of many economic and federal tax uncertainties Democratic Gov. Jerry Brown pointed to when he unveiled his $177.1 billion budget proposal for fiscal 2017-18 last month.

Brown recommended stashing more money into California’s rainy day fund rather than spending it because state income tax revenue from wealthy residents can wax and wane depending on market factors and changes in the federal tax code. “We must maintain a big reserve,” Brown said.

H.D. Palmer, spokesman for the California Department of Finance, said eliminating the federal deduction for state and local taxes would not directly affect California’s bottom line as much as it could “indirectly affect revenue, if it affected economic activity in the state.”

Eliminating the deduction would make personal and business taxes effectively higher for California residents, he said, which would leave them with less money to spend and invest.

Virginians are not as affected by the deduction as taxpayers in states like California or New York. But like higher-income taxpayers everywhere, they would take a hit if it disappeared.

When former Republican presidential candidate Carly Fiorina filed her 2013 federal taxes as a Virginia resident, for example, she got to deduct about $200,000 from her federal tax bill.

That’s how much the former CEO of Hewlett-Packard and her husband paid the year before in state and local taxes. It was the third largest tax break the couple got on their federal taxes on their household income of almost $2 million that year, after deductions for job expenses and charitable contributions.

Virginia’s Democratic governor, Terry McAuliffe, said that while the federal deduction doesn’t directly affect his state’s bottom line, it is one thing that people and businesses consider in moving to a state like his, which has a state income tax and, in some Washington, D.C., suburbs, high property taxes.

“It is an incentive for families to move to your state,” said McAuliffe, who is chairman of the National Governors Association. “It is part of [their] decisions about … whether to locate in a state. This is part of your economic arsenal.”