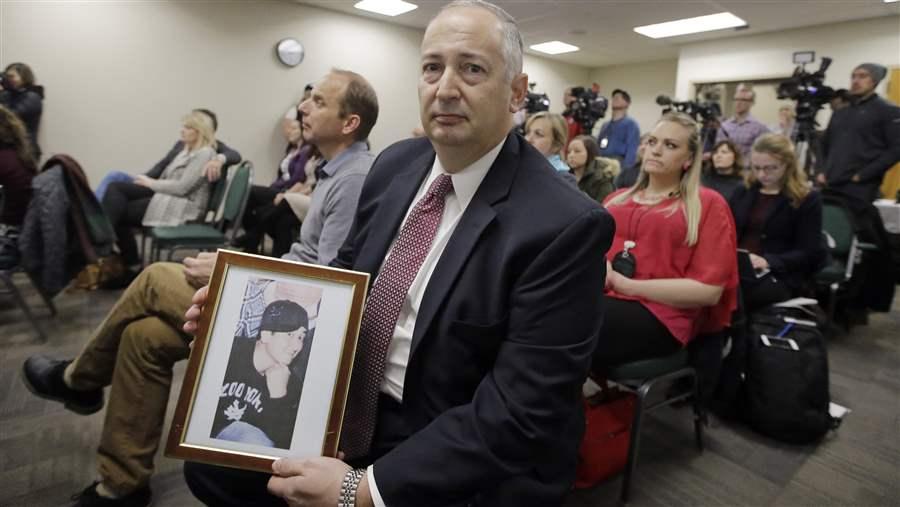 Mark Lewis holds a photograph of his 27-year-old son who died from a heroin overdose at a conference on the opioid crisis in Salt Lake City. As an overdose epidemic grips the nation, governors are urging Congress and the Trump administration not to cut funding for treatment.

In the three years since the Affordable Care Act took effect, its federally funded expansion of Medicaid to low-income adults has become the states’ most powerful weapon in the battle against the nation’s worsening opioid epidemic.

Now, as Congress and President Donald Trump debate potential replacements for the law, governors, health care professionals and advocates for the poor are cautioning that any cut in federal funding for addiction treatment could reverse much of the progress states have made.

“The current plan to replace the Affordable Care Act would cut health care for our most vulnerable residents, including children, seniors and individuals suffering from opioid and heroin addiction,” Democratic Gov. Tom Wolf of Pennsylvania said last month. “This will have a devastating impact for many Pennsylvanians.”

The Affordable Care Act (ACA) offered states the ability for the first time to provide Medicaid coverage to adults without children, with the federal government paying most of the bill. That change, and the law’s mandate that all insurers cover addiction treatment at the same level as medical and surgical procedures, has allowed states to ensure that low-income people can get the care they need, said Linda Rosenberg, CEO of the National Council for Behavioral Health, which represents nonprofit addiction treatment organizations.

Since 2014, an estimated 1.6 million uninsured people with addictions have gained Medicaid coverage in the 31 states plus the District of Columbia that opted to expand the federal-state health care program under the ACA. Not all of the newly insured have sought help for their addictions, but treatment providers are reporting a surge in new patients since the law took effect.

In addition, the ACA has provided financial incentives for states to test new models for treatment that streamline care and improve outcomes.

Although a plan for replacing the federal health law has yet to be announced, House Republicans and Trump have proposed shifting Medicaid to a block grant, in which a capped amount of money would be allocated to each state to provide low-income health care services. By putting more of the cost burden on states, the shift is projected to save the federal government $1 trillion over 10 years.

But most states would be unable to come up with the extra money and would have to scale back efforts to get more people into treatment, said Lisa Clemans-Cope, a researcher with the Urban Institute, which analyzes health care policy.

Because addiction is a chronic, lifelong disease, a cut in Medicaid funding would stymie states’ efforts to reduce the number of people who are addicted to heroin and other opioids and at risk for drug overdoses. Not only would low-income adults already in treatment be in jeopardy of losing coverage for their continuing care, but budget-strapped states likely would be unable to help others get out of homeless shelters and jails and into treatment. 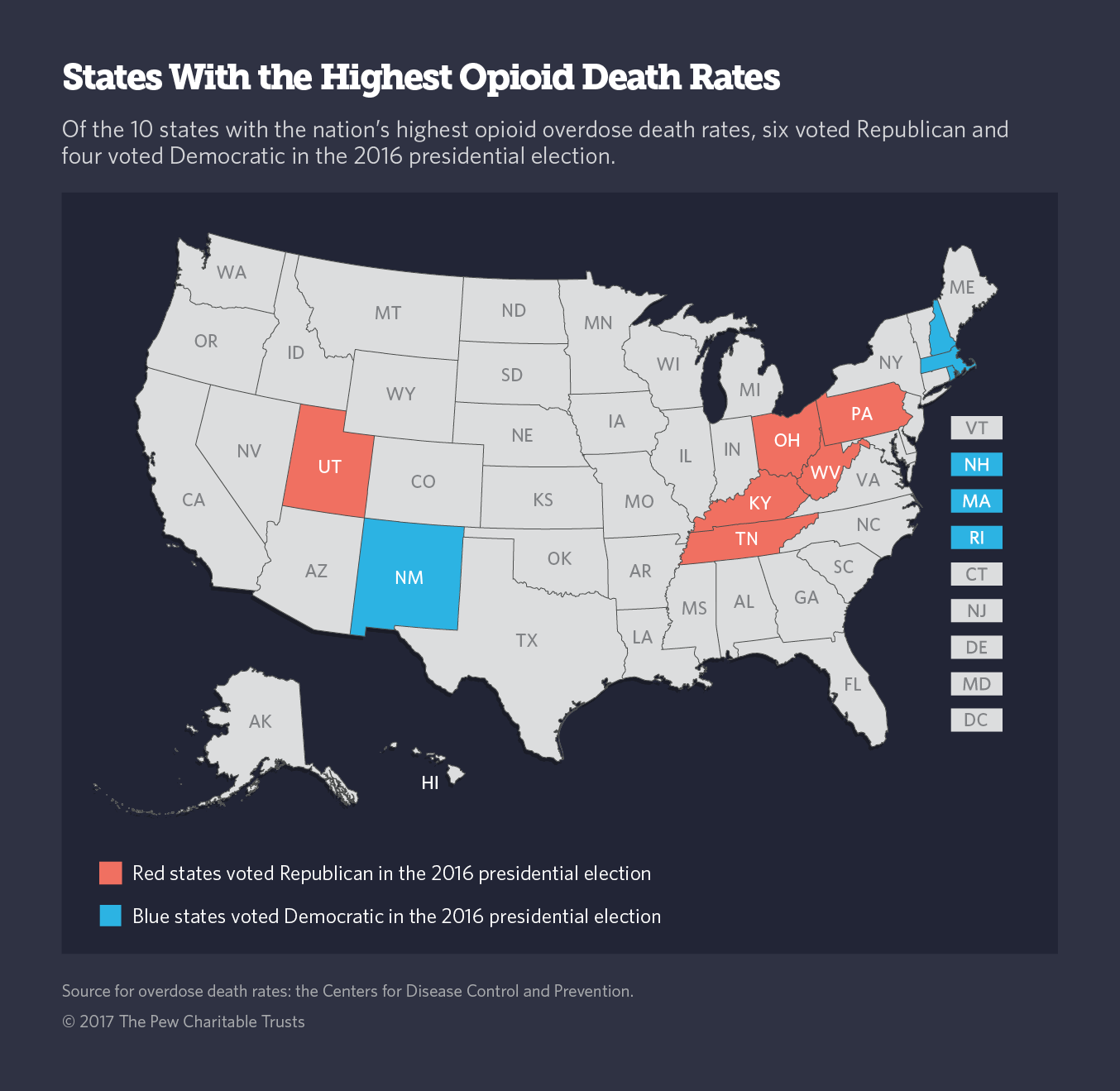 More than 33,000 people died from opioid overdoses in 2015, a nearly 16 percent increase over 2014. Since 1999, the number of fatal overdoses of prescription drugs such as OxyContin, Vicodin and Percocet, as well as heroin and other illicit drugs, has more than quadrupled.

And the crisis is still raging. Every day 91 people die from an opioid overdose, 3,900 begin abusing prescription painkillers, and 580 people start using heroin.

The ACA and the expansion of Medicaid was a game changer for addiction treatment, Rosenberg said, because it enabled states to reach thousands of new addicts and provide better treatment for them.

Taking it away would be a major setback that could cause the opioid epidemic to worsen, Rosenberg said. “We already have a shortage of trained addiction professionals. Who will want to enter the field if funding is cut?”

Under the ACA, states could expand their Medicaid programs to adults with incomes up to 138 percent of the federal poverty line ($16,394 for an individual). The federal government paid all of the costs to cover newly eligible adults in the first two years. Starting this year, the federal share dips to 95 percent of the roughly $53 billion annual price tag for the states that have expanded. If left unchanged, the federal share would decline to 90 percent in 2020.

In 19 states, Republican governors and legislatures have chosen not to expand Medicaid. And many Republican-led states that have expanded Medicaid have customized their programs to reflect conservative values by adding small monthly premiums and copayments to encourage personal responsibility for health care.

In states that have not expanded Medicaid, support for addiction treatment is limited to state and local funds, and federal block grants from the Substance Abuse and Mental Health Services Administration.

National data on the number of people who have received addiction treatment under the Medicaid expansion are not available. But treatment providers in some states that expanded Medicaid report a substantial surge in patients, with most receiving a combination of medications and counseling, an approach that has proven at least twice as effective as treatment that does not include medications.

In Arizona, for example, where Medicaid was expanded in 2014 by then-Republican Gov. Jan Brewer, Kurt Sheppard, CEO of Valle del Sol community health centers, said he’s seen a 35 percent increase in the number of patients receiving medication-assisted treatment and counseling for opioid addictions.

The U.S. Food and Drug Administration has approved three opioid addiction medications — methadone, buprenorphine and naltrexone. Most state Medicaid programs pay for all three medications, according to the American Society of Addiction Medicine, and rarely pay for extended residential treatment. In contrast, commercial providers may not be required by the ACA to pay for all three available addiction medications and often limit access to the drugs. They also are the largest payer of costly residential services.

By providing more effective therapies, Medicaid — the single largest payer of addiction treatment, footing the bill for more than 20 percent of all costs — has been responsible for improving the overall cost-effectiveness of treatment, Rosenberg said.

The ACA also has rewarded states for developing innovative models for treatment that have resulted in even more effective and cost-efficient outcomes, the Urban Institute’s Clemans-Cope said.

Maryland, Rhode Island and Vermont, for example, have taken advantage of federal money to create what are known as health homes for people with drug addiction, in which their treatment is combined with medical care for related diseases such as hepatitis C, as well as mental health and social services.

Overall, the proportion of hospitalizations for substance abuse and mental illness that were uninsured fell from 20 to 6 percent between 2013 and the end of 2014 in states that expanded Medicaid.

Ohio Gov. John Kasich, one of 11 Republican governors who decided to expand Medicaid, recently justified his decision in part as a means to help a spiraling number of Ohio residents with drug addictions.

“Thank God we expanded Medicaid because that Medicaid money is helping to rehab people,” Kasich said earlier this month as he signed a bill expanding access to the overdose rescue drug naloxone.

Ohio added 700,000 new Medicaid recipients under its expanded program. Roughly a third were diagnosed with a substance abuse disorder, according to a recent analysis by the Ohio Department of Medicaid.

In West Virginia, which has the highest opioid overdose death rate in the nation, Medicaid expansion added 173,000 adults to the Medicaid program, bringing total enrollment to 573,000 people, about a third of the state’s population.

In 2015, the first year of West Virginia’s expansion, the number of people in treatment for substance abuse shot from 16,000 to 27,000, according to Mark Drennan, director of the West Virginia Behavioral Healthcare Providers Association. He said the biggest beneficiaries were adult men who previously had no coverage.

Nationwide, states have used expanded Medicaid eligibility to cover previously incarcerated men, allowing them to seek treatment for the addictions that landed them in prison, Rosenberg said. In many places, the coverage has been credited with reducing recidivism rates for people incarcerated for drug-related crimes, she said.

Because the opioid epidemic has spread to every corner of the country, most federal and state politicians know someone who has struggled with addiction or have a family member who has experienced a loss to drug overdose. That helps explain the unusual bipartisan support for treatment funding and other efforts to combat the opioid epidemic, experts say.

Last year, Congress passed the Comprehensive Addiction and Recovery Act of 2016 and the 21st Century Cures Act, which provide limited federal funding for prevention and treatment of opioid addiction.

In addition, states have been enacting laws to restrict the prescribing of opioid painkillers, make treatment more available, and increase the use of the overdose rescue drug naloxone.

Repealing Medicaid expansion has been suggested by some Republicans as partial replacement for the ACA. They also have suggested shifting federal payment for all of Medicaid to block grants to the states. Both proposals aim to substantially reduce the federal government’s cost.

But treatment advocates argue that skimping on federal dollars to fight the opioid epidemic could cost the country more. According to a 2016 report on drugs, alcohol and health by the U.S. Surgeon General, every dollar spent on addiction treatment saves $4 in health care costs and $7 in criminal justice costs.

And advocates for keeping the ACA’s Medicaid expansion argue it would not only save lives but ultimately reduce overall health care costs, a clear priority of the Trump administration.