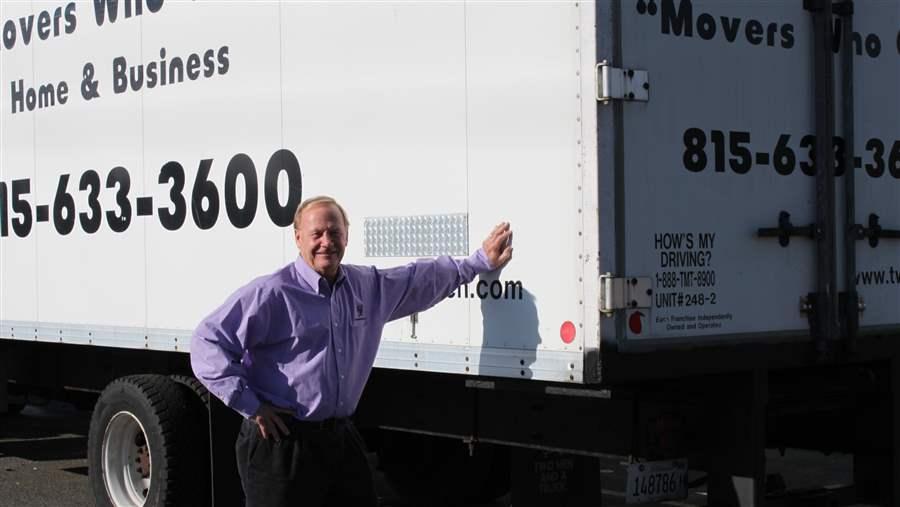 Mover Bob Christensen of Loves Park, Illinois, beside one of his trucks. People moving for jobs or a lower cost of living helped drive population losses in eight states, the highest number in almost 30 years.

Eight states lost population between 2015 and 2016, and 12 others recorded their lowest population increase of the decade, as economic woes and lower birth rates hit some states harder than others.

Connecticut, Illinois, Mississippi, New York, Pennsylvania, Vermont, West Virginia and Wyoming lost population. The last time so many states registered a drop in population was from 1986 to 1987, when oil prices collapsed. Twelve Western and Southern states, along with the District of Columbia, lost population then.

Meanwhile, Alabama, California, Hawaii, Kansas, Louisiana, Maryland, Massachusetts, New Jersey, North Dakota, Oklahoma and Virginia saw anemic growth of between 0.02 and 0.66 percent in the number of people living inside their borders. That’s less than the nation’s increase in population of 0.7 percent and the lowest growth those states had experienced since 2010.

The reasons behind the declines vary. Some reflect national mortality and birth trends, as more deaths occur as the population ages and the millennial generation has fewer babies. That has led to the slowest population growth in the U.S. in 70 years, as Brookings Institution demographer William Frey points out.

Pennsylvania, for instance, had 7,677 fewer people in 2016 than it did in 2015, after having experienced growth every year since 1996. The major reasons: an increase in deaths, a decrease in births and fewer foreign immigrants than other states have.

“There are more and more of us at ages where deaths are more numerous,” said Herbert Smith, director of the Population Studies Center at the University of Pennsylvania.

A state’s economy also plays a part. Like in 1986, the economies of energy-producing states such as Kansas, North Dakota, Oklahoma, West Virginia and Wyoming have suffered from low oil, natural gas and coal prices. People flee a state when jobs evaporate to find work elsewhere if they can.

West Virginia and Wyoming are the two largest coal producers in the country. As coal production declined, West Virginia lost 9,951 people from 2015 to 2016, its fourth straight year of population loss. Wyoming lost 1,054 after having steadily gained population since 1999.

Americans are moving again in more rapid numbers after hunkering down during the recession. And people’s ability to move, as their personal finances or job outlooks have improved, “is now critical to whether a state gains or loses population,” said Kenneth Johnson, a demographer at the University of New Hampshire’s Carsey School of Public Policy.

Aging baby boomers are moving to the Sun Belt or other lower-cost states to retire. Florida’s population, for instance, is among the nation’s fastest-growing. Workers who are able to move and get a job elsewhere will escape high cost-of-living states. And when businesses find high taxes, high labor costs or a shortage of workers and can move, they will and take the jobs with them.

Idaho, Nevada and Washington state are experiencing some of the fastest economic and job growth in the nation. And their populations are growing along with that, rising at more than twice the national growth rate from 2015 to 2016.

High state and local tax burdens may not force people to pick up and move. Most often it’s for jobs, higher pay or a desire to retire elsewhere. But taxes contribute to the cost of living and factor into people’s thinking about moving, some research indicates.

Isaac Martin, a University of California at San Diego sociology professor who wrote about the effect taxes had on moving last year, found that the burden of property taxes will prompt some homeowners to move. But that most often happens when they have suffered a drop in income, caused by a job loss or retirement. “These are not people whose property taxes went up, but rather people whose incomes fell,” he said.

The nonpartisan Tax Foundation, which advocates low rates, said in a new assessment of migration between the states last year, “Taxes are not the sole factor why individuals migrate … but a relationship does exist.”

Some people in Illinois, which lost 37,508 people, the most of any state, think so. When asked in October whether they would like to leave the state, about half the people polled by the Paul Simon Public Policy Institute at Southern Illinois University said yes. The most cited reasons: taxes and weather.

Illinois and three other states that lost population — Connecticut, New York and Vermont — had among the highest median property taxes in 2015. That’s something that Republican Gov. Bruce Rauner would like to change.

Rauner asked legislators to freeze property taxes in his Jan. 25 State of the State address, calling for “property tax relief to reduce the immense burden felt by our families and businesses — and to give them reason to stay here.”

Property taxes also are on the mind of Democratic Gov. Andrew Cuomo in New York.

“Property taxes are what is killing this state,” Cuomo said in a Jan. 10 State of the State address in suburban Westchester County. New York City suburbs like Westchester dominate the list of highest property tax bills in the country, according to a 2015 study by Zillow.

If businesses and the jobs they provide leave, so do people. So some states are seeking to hang on to the businesses they have and attract new ones by improving their business tax climate.

Fast-growing Florida, Nevada and Utah rank high on the Tax Foundation’s “State Business Tax Climate Index” for this year. Connecticut, which lost 8,278 people, and New York, which lost 1,894, rank near the bottom.

In an effort to “improve the business climate” and keep the insurance industry and the 58,000 jobs it creates in Connecticut, Democratic Gov. Dannel Malloy on Monday proposed lowering a tax on insurance premiums. “We must ensure that we maintain our competitive edge so that (insurance companies) continue to thrive and grow in our state,” he said.