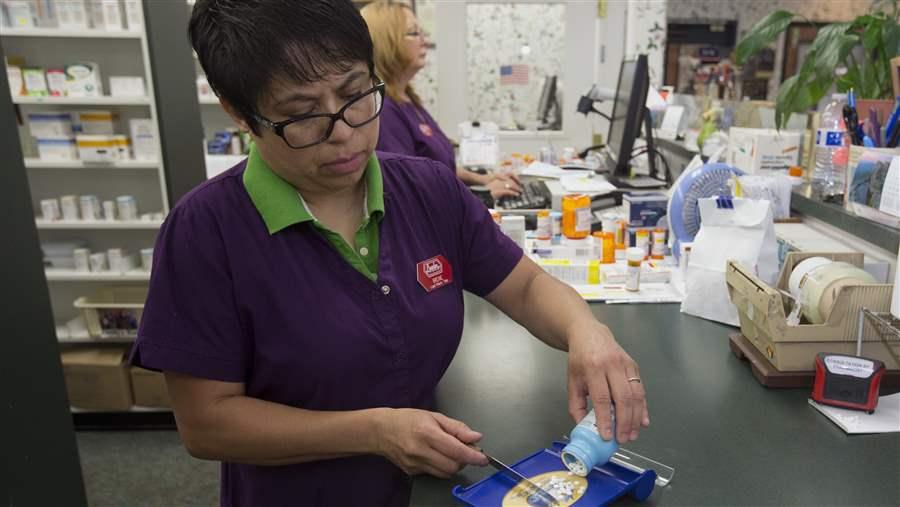 A pharmacist fills a prescription in Sacramento. California has limited insurers’ ability to make midyear changes to covered drugs.

When she was 12, Logan began having suicidal thoughts. She started cutting herself and withdrew from her friends. She went from being a straight-A student to a failing one, and had to give up a coveted spot at her magnet school in Tennessee.

Logan’s psychiatrist prescribed the antidepressant Pexeva, which for four years helped her bounce back in school and reconnect with friends. Then, during Logan’s junior year in high school, her father’s health plan raised the price of Pexeva from $5 to $200 a month, which was too expensive for her family.

Her psychiatrist argued with the insurer on her behalf. The doctor pointed out that Logan’s mother was manic depressive, and it was possible that Logan would turn out to be as well. The psychiatrist had selected Pexeva because it is an antidepressant that does not trigger mania in patients with bipolar disorder.

But the insurer, Cigna, refused to relent, advising Logan’s family to switch her to a less expensive antidepressant. Reluctantly they did — with disastrous results.

“Three weeks after I started on the new medication, I had my first manic episode,” said Logan, who asked that her last name be withheld because of the stigma associated with mental illness. In her psychosis, she tried to kill herself, which led to a two-week stay in a psychiatric ward. She tried a series of medications that stabilized her, but only temporarily, and they caused noxious side effects such as nausea, migraines, tremors and vocal tics. “It was chaos, absolute chaos,” Logan, now 25, said.

Examples like Logan’s are why more states are adopting policies that prevent insurers from ceasing to cover a medication in the middle of the year, when a patient is still locked in to a particular plan, unless there is a good medical reason for doing so. The laws also limit midyear increases in what patients must pay for a drug.

In the last two years, California and Nevada have adopted such rules. Florida is considering and Tennessee is expected to consider similar legislation this year, and Massachusetts has created a commission to explore the idea. (The laws would not prevent insurers from immediately dropping drugs deemed unsafe by the U.S. Food and Drug Administration.)

Insurers and the pharmaceutical industry argue that midyear changes make it possible for them to give patients the latest and most effective treatments. They also contend that the practice allows them to offer patients alternatives when a drug company suddenly raises the price of a particular drug.

Cigna did not address Logan’s particular experience, but spokeswoman Karen Eldred said the company’s decisions about adding or removing drugs from coverage are intended to help patients “take advantage of new clinical solutions and reduce their prescription drug spending while also enhancing patient safety.” Eldred added that Cigna is willing to "work with a customer’s doctor if there is a reason to consider approving coverage for a non-covered drug as medically necessary."

Medicare, the government health plan for seniors, already prohibits midyear changes unless the Centers for Medicare and Medicaid Services authorizes it. But even then, Medicare allows patients who are on a medication to remain on it with little or no change to their out-of-pocket cost. Medicaid, the health plan run jointly by the states and the federal government, has no such prohibition.

The coalition pushing for the legislation includes doctor and nurse professional associations and organizations representing those with chronic diseases, such as HIV-AIDS, arthritis and autoimmune diseases.

They argue that when health plans change their formularies (the medications a health plan covers) in the middle of a contract year, it often leaves patients without a suitable alternative or having to pay much higher out-of-pocket costs. And they are unable to switch insurers to find relief. Many people with chronic conditions select health plans precisely because those plans cover a particular drug at an affordable price.

“Patients who are doing well under a certain treatment are having the rug pulled out from under them and denied the medications that they and their doctors say they need,” said Robert Levin, a rheumatologist in Clearwater, Florida. Levin is president of the Florida Society of Rheumatology, which is supporting a bill in the Florida Legislature that would restrict midyear formulary changes.

Republican Rep. Ralph Massullo, a dermatologist from central Florida who is sponsoring the bill in the House, said preventing midyear changes is a matter of equity.

“If you have a contract for a year, and I’m locked in for a year, it’s only fair that you [a health plan] are locked in to that contract as well,” Massullo said.

But insurers and drug companies argue that while individual patients may suffer hardships, the flexibility to change formularies helps keep drug prices down for everybody.

Grow said that midyear formulary changes are rare, but groups pushing the bills say they have received an increasing number of complaints from doctors and patients in the last five years.

Recently, the Global Healthy Living Foundation, which advocates on behalf of people with chronic illnesses, joined with other organizations to survey patients in Florida and Tennessee about midyear formulary changes. In Florida, 68 percent of those with chronic conditions said their insurer had made formulary changes that reduced coverage of their prescribed drugs. Nearly three in four said they couldn’t afford the increased costs and were forced to switch to a different medication. And 58 percent reported that the new medication was less effective than the previous one.

“It’s bad enough for patients when plans change formularies at the beginning of a contract year, but when it happens midyear, we think that crosses the line over into unethical behavior,” said Steve Marmaras, director of advocacy for the foundation. “It’s bait and switch.”

Health plans establish their formularies after negotiating prices with pharmaceutical manufacturers. Drug companies producing similar medications compete with one another to be included on a health plan’s preferred list. Because of discounts offered by the drug companies, health plans try to induce doctors and patients to choose drugs on the preferred list by offering them at lower prices with less onerous cost-sharing provisions.

Often, drugs not on the preferred list not only cost patients more but are subject to other barriers, such as the requirement that the health plan specifically give authorization for a prescription before it can be filled by a pharmacy, a practice known as “prior authorization.”

Midyear formulary changes usually occur when a new drug arrives on the market or a drug company offers an established drug at a lower price to the health plan. In response, insurers may move a drug off the preferred list or even drop it from the formulary altogether.

“We can’t predict price increases from drug companies, and having a midyear point where we can make changes to the formulary gives us the ability to react to market changes,” said Shawn Davis, a senior director at Express Scripts, one of the biggest pharmacy benefits managers.

But people with mental illness, cancer and rheumatological and autoimmune diseases often react differently to different drugs. Finding the right drug often involves a frustrating and debilitating period of trial and error.

“This can absolutely have life-or-death consequences,” said Michael Ruppal, executive director of the AIDS Institute, a nonprofit that supports those with HIV-AIDS.

Some side effects can result in costly emergency room visits and hospitalizations, said Emily Lemiska, of the U.S. Pain Foundation, which advocates for patients in chronic pain. “So even though the drugmaker or pharmacy benefit manager is saving money, the overall health care system is not,” she said.

Logan is an example. Relatively healthy now and the manager of a retail operation in Nashville, she remains resentful and perplexed about having been forced off a medication that had worked so well for her.

“I’m sure I cost them much more for my hospitalizations and all the other psychiatric appointments and trying out different medicines than I ever would if they just left me on medicine that actually had worked,” she said of her insurer. “It was not a very humane decision.”