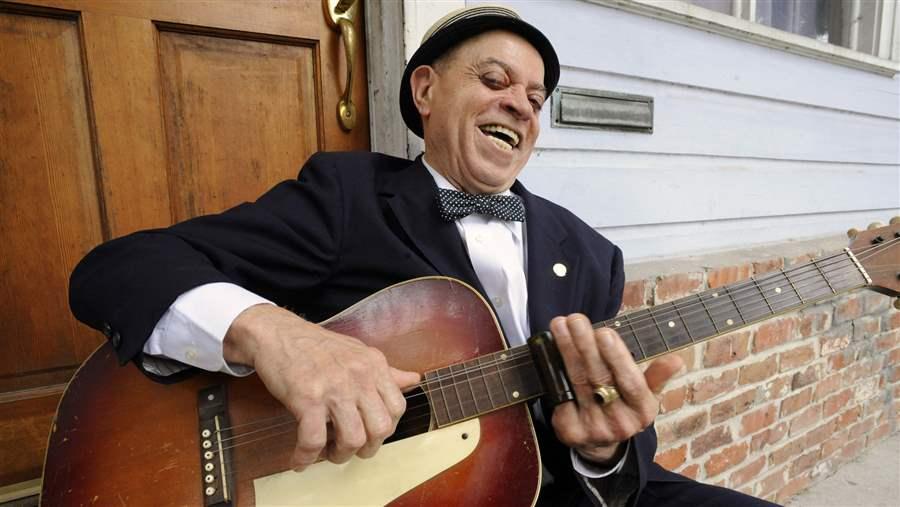 Deacon John Moore, a native New Orleanian, has been able to make a living with his music and buy a home. Other musicians struggle to pay the rent.

NEW ORLEANS — At 75, Deacon John Moore considers himself one of the lucky ones: The scion of three generations of music-making Creoles, he’s been able to sustain himself with his guitar, raise a family, buy a house. Most other musicians here, he says, aren’t so fortunate.

He’s tooling around the streets of Tremé — one of the nation’s oldest black neighborhoods and the birthplace of jazz — in his ancient Volvo, pointing out all the gentrified houses, the ones with the jacked up rents. Everybody wants to live here now, he said.

New Orleans is enjoying a renaissance 12 years after being devastated by Hurricane Katrina. It took in $7 billion in tourism dollars in 2015, and the city’s famed music scene was a big reason for the draw.

But New Orleans, like much of the rest of the country, also has an affordable housing crisis — costs here have jumped 50 percent since 2000. As a result, many of the musicians tourists flock to see are forced to do the “double-ZIP code thing”: live outside the city and parachute in for gigs.

“If you don’t get musicians and cultural artists affordable housing and rents, it’s going to have a negative impact on the cultural economy,” said Moore, who is president of the local musicians’ union. “We’re going to kill the goose that laid the golden egg.”

The city’s effort to house its creative class is a struggle playing out around the country. As urban rents skyrocket and wages stagnate, musicians and artists increasingly are being displaced. Many make do in substandard housing, such as Oakland’s Ghost Ship, where 36 people died in a November fire.

In New Orleans, Nashville, New York and Austin, Texas, the arts and entertainment scene is a big part of the tourist equation — and the local economy. But a thriving arts community is important to other cities, too. Research has shown that the arts can give them a competitive edge, spur economic development, create jobs, foster community pride and entice millennial workers.

But city officials face a conundrum: How do you stimulate and preserve your city’s culture when artists and musicians can no longer afford to live there?

Several cities are experimenting with ways to keep the creative class from getting priced out — and with programs that go beyond the federal low-income housing tax credit that gives private developers an incentive to create low-income housing in exchange for a dollar-for-dollar reduction in the developer’s tax burden.

In June, New Orleans Mayor Mitch Landrieu announced a five-year housing plan, pledging to build or preserve 7,500 affordable housing units, including “workforce housing” units for “service workers, artists and culture bearers, who may require a deeper housing subsidy.” In April, construction started on the Bell Artspace Campus, an ambitious, $37 million space for the city’s musicians and artists to live and work in. The project is funded through a combination of tax credits, philanthropic dollars and city subsidies.

In March, the Austin City Council voted to explore developments that would cater to Austin’s artistic community with integrated affordable housing and creative workspace. In December 2015, in an effort to make housing more affordable and discourage gentrification, the council voted to more than double the percentage of tax revenue that goes to the city’s housing trust fund.

Meanwhile, in Nashville, a new program targeted for creative professionals allows low- to moderate-income artists to take out low-interest loans to purchase property, rehab existing structures or build new buildings to live and work in.

In New York City, Democratic Mayor Bill de Blasio announced plans in 2015 to provide 1,500 affordable housing units for artists and musicians by 2025. The program will be financed through funding from city agencies and private donors.

Dallas also has plans to create an Arts District that would provide affordable housing and workspace for creative professionals and their families, as does the Texas city of Plano. In Baltimore and Montgomery County, Maryland, there also are plans in the works for subsidized housing for artists.

In the wake of the Oakland fire, California legislators are working on legislation that could address the affordable housing crisis there. And this week, California is launching a pilot program to identify 10 to 15 communities that could be designated as cultural districts with housing and workspace for artists.

“The smartest cities acknowledge that in many respects, they’re in competition for energy, for investments, for young families, for their tax base,” said Craig Watson, director of the California Arts Council.

The arts have historically been a way for cities to stand out, he said. And because artists are frequently living at or near the poverty level, government-subsidized housing is one way to ensure they don’t end up homeless or leave the city.

“Cities should not sit passively by and lose their artists because they’ve failed to address the very real concerns that artists have,” Watson said.

But city efforts to boost affordable housing can only go but so far, said Elisha Harig-Blaine, who works on housing issues for the National League of Cities. Municipal budgets are straining to keep up with rising costs in public safety and infrastructure, he said, while federal investments in cities have declined.

Some states, such as California, are stepping in to help, Harig-Blaine said, but “the demand for affordable housing is far outpacing the supply.”

“This could put a chill on the development of housing because of the uncertainty,” Watson said.

When the Levees Broke

Perhaps no city needs to figure out how to house its artists like New Orleans.

When floodwaters caused by Katrina swept the city in 2005, 134,000 homes were destroyed and nearly 4,000 musicians scattered. Some have returned and done just fine, such as Kermit Ruffins, Greg Stafford and Trombone Shorty, musicians with big national and international followings. Others have not returned — or when they have, they found themselves priced out of the city.

Some were forced to double up with family members because they couldn’t swing the rent for their own place. Many now live in the far suburbs, often without a car or reliable public transportation, forcing them to commute several hours round trip to make gigs.

“It’s an unsustainable thing,” said Ethan Ellestad, executive director of the Music and Culture Coalition of New Orleans, which advocates for the inclusion of artists in city policies. “It’s hard to take a drum kit on the bus.”

Before Katrina, a house would rent for as little as $500 in the city, although some of the housing was substandard. After Katrina, the city demolished 15,000 blighted housing units. The median rent for a one-bedroom is now $1,000, a 21 percent increase since 2012. Nearly a third of the city’s renters now spend more than 50 percent of their income on rent.

Meanwhile, wages for musicians stalled. A 2012 study by the now-defunct nonprofit Sweet Home New Orleans found that the average musician in the city pulled in less than $18,000 a year. There have been no follow-up studies, but Ellestad’s group estimates that since then, incomes have increased 5 to 10 percent.

In the early days post-Katrina, there was a concerted effort to woo musicians back: Native sons Harry Connick Jr. and Branford Marsalis, with the help of Habitat for Humanity, created the Musicians’ Village, a complex of 72 single-family homes, 5 elder-friendly duplexes, a toddler park and a musicians’ center.

The project was intended to boost home buying among musicians. But many musicians didn’t have the credit to qualify, said Fred Johnson Jr., CEO of the New Orleans Neighborhood Development Foundation, which helps low- and moderate-income families buy homes.

A handful of affordable housing projects for artists and others have cropped up, including loft-like apartments carved out of abandoned warehouses or blighted grocery stores, such as the St. Joe Lofts in the Warehouse District and the Ashé Cultural Arts Center in Central City. A loft that might cost $1,100 on the open market would go for about $427 to $603 at Ashé, depending on the tenant’s income, according to Carol Bebelle, the center’s executive director. The project, which involved special outreach to artists, cultural bearers and social activists, was funded through tax credits and loans.

With the Bell Artspace Campus, the city took an abandoned school building and provided Artspace, the nonprofit developer, with a bridge loan to get things started. Once the loan is repaid, the city can then cycle that money into other development projects, she said.

“Repurposing public land and facilities brings down development costs so that we can make housing more affordable,” Lee said.

Andreanecia Morris, executive director of the nonprofit HousingNOLA, said it is crucial for the city to look for financing beyond the federal low-income housing tax credits. Developers who rely on tax credits are only required to keep the units at below-market rates for 15 years. After that, they are free to increase rents.

Some developers, such as Erik Beelman of St. Joe Lofts and Bebelle, say they are committed to maintaining their artist housing at below-market rates for more than the required 15 years.

“We were given a challenge because of that disaster,” Bebelle, who also is a poet, said. “We’re getting a chance to do a do-over. There’s not another city in the country that’s been given that opportunity. We need to do a great job.”