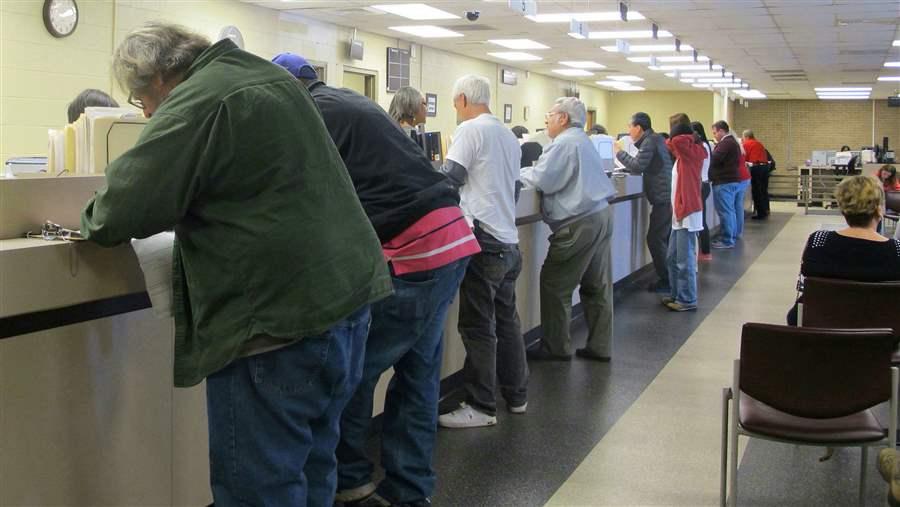 Drivers at a South Carolina Department of Motor Vehicles office during a program that allowed some people with suspended licenses to get them reinstated. Many states have opted out of a federal law that calls for stripping the licenses of those with drug convictions, even when the offense had nothing to do with driving.

When Shane Bradwell got out of jail in 2011, he knew he would have a hard time getting a job, so he decided to start a house-painting business. But he quickly ran into a roadblock: Massachusetts suspended his driver’s license, not because he was a bad driver, but because of his drug conviction.

That meant Bradwell had to balance scrapers and brushes and even a gallon or two of paint on his bike. On workday mornings, he peddled to the bus stop, hopped on the bus with all his gear, and traveled as far as he could. Then he unloaded all of his stuff, rearranged it on his bike, and rode the rest of the way to his job site.

Massachusetts last year joined the majority of states that have scaled back or scrapped laws that automatically suspend the driver’s licenses of people with drug convictions and often charge hefty fees to get them reinstated. Unfortunately for Bradwell, Massachusetts made the change after he had borrowed money to pay the $500 fee to get his license back.

Many of the state license suspension laws were prompted by a 1991 federal law that threatened to withhold a portion of states’ highway funding if they didn’t suspend driver’s licenses after a drug conviction. Nearly 40 states have since taken advantage of a provision of the law that allows them to opt out. While penalties remain for people convicted of driving while high, those whose drug convictions have nothing to do with driving are able to hold on to their licenses.

Today, just 12 states and the District of Columbia remain covered by the federal law, according to the Prison Policy Initiative, which researches the effects of mass incarceration. And, amid a move in many states to make it easier for people with criminal records to re-enter society, some of them are reconsidering.

Last year, Ohio gave judges discretion over whether to suspend driver’s licenses for drug crimes. Legislation proposed this year in Washington, D.C., and Virginia would repeal their current suspension laws. Last week, the Virginia Senate approved another bill that would end the practice just for those convicted of marijuana possession.

And a bill in Florida would reduce the suspension period from one year to six months while the state pursues a waiver from the federal government, after which the sponsor hopes to end the suspension entirely.

“If someone gets caught with drugs, the last thing you want to do is take away their ability to drive and get a job,” said Florida state Sen. Jeff Brandes, a Republican who sponsored the legislation there. “Keeping them from being employed is at cross purposes with what our desire is.”

In some states, the laws have been only partially lifted. Indiana, like Ohio, gives judges discretion over whether to suspend a license. Some, like Massachusetts, still suspend the licenses of people convicted of dealing drugs, reflecting a hesitation among some lawmakers to make life easier for drug dealers in the face of a raging opioid epidemic. But the bills have generally received wide support, including the backing of judges, prosecutors and, in Massachusetts, the attorney general.

“We want to make sure people who have done their time don’t suffer doubly,” said Brian Ferguson, director of the Mayor’s Office on Returning Citizen Affairs in Washington, D.C.

In most states that automatically suspend licenses for those with drug convictions, the suspensions aren’t permanent. The federal law requires suspensions last at least six months, though some states go further, requiring a year or more. Afterwards, people can pay a fee to have their license reinstated, but it typically costs more than $100. In Virginia it costs $145 and in Alabama it’s $275.

Some lawmakers who have sponsored legislation to eliminate the suspensions said they worried that the difficulty in finding work after a conviction, especially without being able to drive, coupled with the high fees to get licenses back, would steer people back to crime or drug use.

“In most cases they don’t have the money. Five hundred dollars to someone who has just gotten out of jail is like a million dollars,” said Massachusetts Senate Majority Leader Harriette Chandler, a Democrat who sponsored last year’s law. Roughly 7,000 people a year had their licenses suspended in the state because of drug convictions, according to a Prison Policy Initiative report.

And because many people continue to drive with a suspended license, some legislators worried those most committed to turning their lives around were the ones being hurt by the rules.

Bradwell, a 33-year-old high-school dropout, had his license suspended for previous drug crimes, and back then, he said, he continued to drive anyway.

“At first I had a drug habit so I did what I had to do to … feed the habit of using drugs,” said Bradwell, who had been caught with marijuana, crack and opioid pills, and later was caught driving with a suspended license.

But after his most recent 60-day stint in jail for drug possession in 2011, he was determined to follow the law. He said he spent as much as $100 a week on transportation, either hiring someone with a truck to carry his supplies and equipment or taking public transportation with all his gear. He limited himself to painting houses he could get to from his home in Worcester.

And this time, he didn’t drive with a suspended license. “I wouldn’t do it. Not at all,” he said. He knew getting caught would unravel his progress as he was getting his life together and trying to save money to get his license reinstated. “I wasn’t able to take the risk anymore.”

Trapped in a Cycle

Lawmakers and others who want to end the automatic suspensions argue that driver’s licenses shouldn’t be taken away for offenses that have nothing to do with driving.

Joshua Aiken, author of the Prison Policy Initiative report, said many drivers who skirt the law in order to get to work are just one broken taillight or lane change violation away from getting caught.

And that makes the strain on the courts even worse, Brandes and others say.

“I sat in a courtroom about a year ago and watched the hearings, and a good two-thirds of them were for suspended driver’s licenses and pleading to driving with a suspended license,” Brandes said. That means adding new convictions to their records and extra court fees to pay off, he said. “They get trapped in this cycle.”

In Ohio, judges supported ending the mandatory suspensions in part because of the extra work it created as people petitioned to drive to work or were caught driving with a suspended license, said Louis Tobin, deputy director of the Ohio Judicial Conference.

Further complications arise when people driving with a suspended license are involved in an accident, because their insurance may not cover them, leaving other drivers to cover the costs.

Some states have been hesitant to repeal their laws entirely.

In Massachusetts, a last-minute amendment added to the bill kept in place a $500 reinstatement fee and imposed a five-year suspension on people caught trafficking heroin and other drugs, but not marijuana.

Massachusetts state Rep. Jim Lyons, a Republican who supported the amendment, said legislators shouldn’t roll back penalties on drug dealers in the midst of an opiate epidemic the state is determined to end.

“I have little sympathy for someone who sells fentanyl knowing it’s going to kill people,” Lyons said. “I wanted to help those struggling with disease to get back on their feet, but I didn’t want to give the impression in any way that we are easing our approach on drug traffickers in Massachusetts.”

Though Maine has already opted out of the federal law, Republican Gov. Paul LePage pushed a bill last year that would have required the state to start suspending the licenses of people convicted of drug trafficking. The measure was voted down in committee, despite LePage’s assertion that the state’s waiver was inconsistent with his position on fighting drugs.

In Ohio, judges were given discretion over whether to suspend licenses so that those who are viewed as a risk because of their drug use won’t be able to get behind the wheel, said Republican state Sen. Bill Seitz, who sponsored last year’s law.

“It does not mean everyone convicted of a drug offense will never have their license suspended,” Seitz said of the law. “If you’re a heroin addict, a judge may very well say upon conviction, ‘We don’t want you to have a license until you’ve completed treatment.’ ”

Tobin, with the Ohio Judicial Conference, said judges saw the law as an impediment to re-entry, keeping people from meeting requirements of probation like going to treatment and working.

“If a judge requires treatment and then has to suspend a license, especially in rural Ohio, people had no way to get to their required treatment,” he said. “The judge knows the offender best, and one size doesn’t always fit all.”