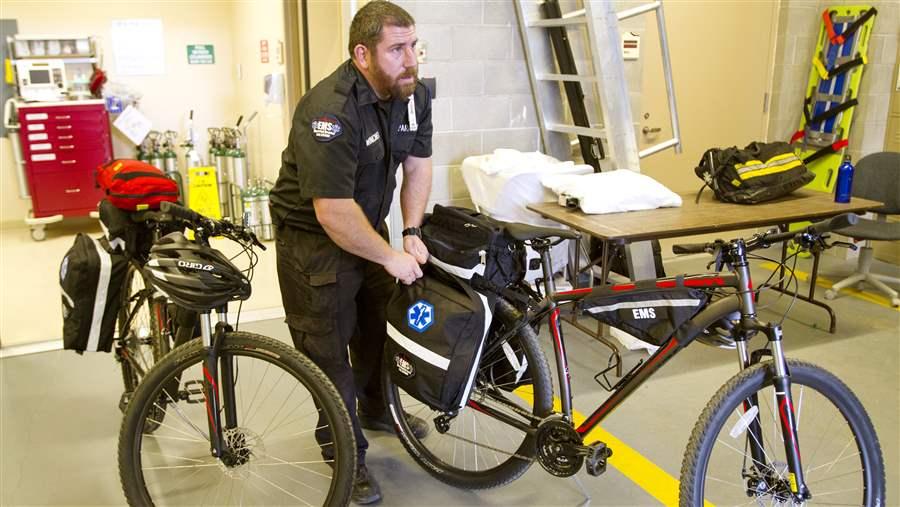 Paramedic Ryan Winchell of West Park Hospital EMS shows off mountain bikes used by the hospital’s Bike EMS Team in Cody, Wyoming. Hundreds of bike medic units have cropped up across the U.S.

When actress Carrie Fisher suffered cardiac arrest near the end of a flight to Los Angeles just before Christmas, some of the first emergency medical crews to arrive on the scene were on two wheels: medics on bicycles who helped resuscitate the “Star Wars” star.

The Los Angeles Fire Department’s Bicycle Medic Team is one of hundreds of bicycle-riding emergency medical teams in big cities such as Boston and Philadelphia and small ones such as Cody, Wyoming, that deliver quick emergency care by darting in and out of heavy traffic, maneuvering through large crowds or cutting across park land more nimbly than a crew in an ambulance.

“Sometimes, every second counts with these situations,” said Maureen Becker, executive director of the International Police Mountain Bike Association, a nonprofit that trains and certifies public safety cyclists. “Because a bicycle is able to respond so quickly, the actions can be life-saving.”

The Los Angeles EMS bike team that raced to help Fisher was deployed at the airport during the holiday rush. It boarded her plane with an ambulance crew and members of an engine company, who all worked to give her advanced life support, said Robert Dunivin, a fire department captain and chairman of the bike team advisory committee. Fisher died at a local hospital four days later.

When the Los Angeles bike unit made its debut patrolling a triathlon in 2004, it had 20 cyclists. The team is now one of the largest in the U.S., with 120 cyclists on the roster and 60 bikes. It deploys not just at events such as the Los Angeles Marathon and the Rose Parade, but at Los Angeles Rams football tailgating parties and on the Venice Beach Boardwalk on summer weekends.

Dunivin said the unit’s budget is modest — about $90,000 a year for staffing plus $12,000 for equipment. At least half the time, EMS bike medics can handle a call by themselves so an ambulance isn’t needed, which makes it cost-effective for his agency, he said.

They are especially useful when roads are closed or congested, said Mike Touchstone, past president of the National EMS Management Association, a professional association of EMS managers. Medics on bikes can navigate crowded streets and sidewalks swiftly and go up and down stairs, escalators and elevators.

“You have easier access to patients and can get there more quickly than you can in an ambulance when there is a crowded event,” said Touchstone, a paramedic who is also regional director of the Philadelphia Office of Emergency Medical Services. “That makes a big difference if someone is having a heart attack or a stroke.”

It made a big difference in Minneapolis in 2014, when a 61-year-old runner suffered cardiac arrest and collapsed during a marathon. A bike medic team roaming the course arrived quickly, shocked the man’s heart with a portable defibrillator and stabilized him before an ambulance took him to the hospital, where he recovered.

Many of the first officially organized EMS bike units in the U.S. were launched in the 1990s in places like Denver; East Baton Rouge, Louisiana; and Troy, Ohio. They were modeled on police bike patrols, which had become popular a decade earlier.

Today, at least 500 agencies across the country have EMS bike teams, according to Becker, whose group has trained about 1,400 of the cyclists since 2013.

While there’s little data on American EMS bike units and their effectiveness, a 2013 report found that Heathrow Airport had the highest cardiac arrest survival rate in London outside of hospitals, largely because of the airport’s full-time bike medic unit.

Many bike medics are paid emergency medical technicians and paramedics, but others work for volunteer associations or other organizations.

In New York City, the all-volunteer Central Park Medical Unit’s 10-member bicycle emergency response team patrols the 843-acre park many weekends during the warmer months. It also appears in force at concerts and other big events.

“When everyone is sitting on a blanket, how do you get through to them in an emergency?” said Rafael Castellanos, the unit’s president. “The bike teams are very nimble and can get into places a large vehicle cannot.”

Like the Central Park crew, most EMS bike teams are part time and hit the road during spring, summer and fall for special events. (Some in temperate climates patrol year-round and others in cold climates operate during winter.) Teams show up on weekends in some cities’ tourist areas and downtown entertainment districts. In Atlanta, they patrol Hartsfield-Jackson International Airport daily.

EMS cyclists generally travel in pairs and mostly use mountain bikes, which are sturdy and designed to carry a heavy load and maneuver through traffic and crowds and around obstacles.

Like ambulances, bike medics carry first aid and trauma supplies, oxygen, IVs, cardiac monitors and defibrillators, but in smaller quantities. The bike and equipment combined can weigh up to 50 pounds, so cyclists need to be in good shape.

Some agencies require EMS bike team members to go through training before they’re sent out. Becker’s group offers a 32-hour course over four days. Participants learn how to cycle in complex traffic, ride with a heavy load, ascend and descend stairs and pack medical equipment. Those who pass written, road and bike handling skills tests are eligible for certification.

EMS bike units have some limitations. They can’t take patients to the hospital if they need additional care and can’t carry backboards, stretchers or long or bulky pieces of equipment. Thunderstorms and snow can be a challenge.

But EMS bike team officials say creating and outfitting a bike team is a good investment because it’s much cheaper than purchasing and equipping an ambulance, which generally costs between $120,000 and $250,000. Instead, the price tag, on average, is $1,200 for a bike, $400 for saddlebags to hold equipment, $300 for a uniform and $300 for emergency lights and sirens, which some teams use.

In Cody, for example, it cost less than $3,000 to set up West Park Hospital’s EMS department’s unit with three bikes, uniforms and saddlebags, according to clinical supervisor Ryan Winchell. The unit uses medical supplies the EMS department already has in stock. He said buying and equipping an ambulance, on the other hand, can run as much as $280,000.

The 16-member bike unit in the rural town 50 miles outside of Yellowstone National Park frequently is called into action at parades and Fourth of July festivities as well as 5K and 10K trail runs.

Winchell, a paramedic and bike team member, said he and his colleagues have a different mindset cycling to the scene than they do when they’re riding in an ambulance.

“You don’t have your same comfort zone of having a few minutes to think about where you’re going and what you’re going to do,” he said. “It’s definitely a different kind of game.”

But EMS workers who are bike enthusiasts are especially likely to embrace those challenges.

“It’s honestly the most fun part of my job,” said Dunivin of the Los Angeles Fire Department. “I’m normally in the fire station all day or out on an engine. When you’re on the bike, you’re talking to people on the streets and interacting. I keep thinking, ‘Wow. They pay me to do this?’ ”