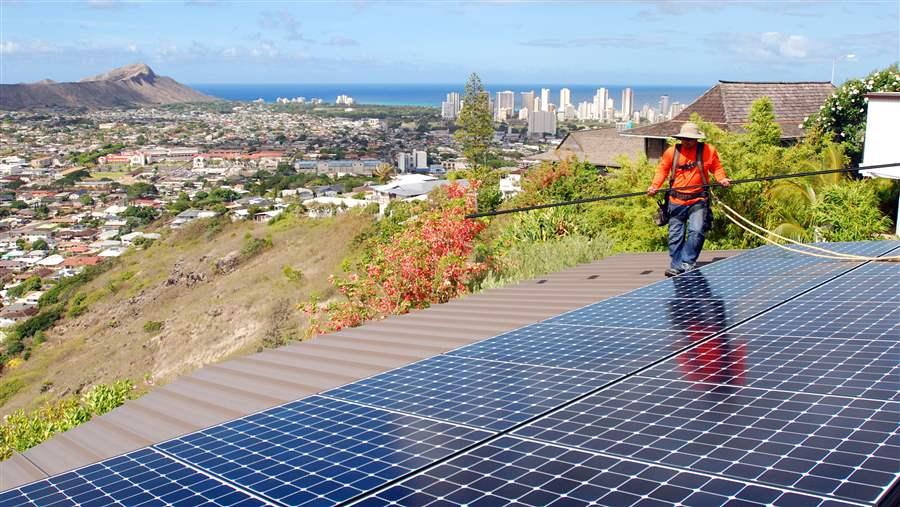 A worker installs solar panels on a roof in Honolulu. More states will encourage the use of renewable energy this year, seeing the economic benefits the industry brings.

Editor's note: this story has been updated to correct information about Rocky Mountain Power's proposal.

In Wyoming, Republican Gov. Matt Mead is counting on a state-funded research center set to open this year to find a way to produce energy from coal without releasing carbon dioxide into the environment. In Kansas, Republican Gov. Sam Brownback is eyeing new wind farms to bring jobs and economic growth. And in Ohio, Republican Gov. John Kasich says the state needs to support renewable energy to stay competitive and reduce electricity costs.

“Ohio workers cannot afford to take a step backward from the economic gains that we have made in recent years,” Kasich said last month as he vetoed a bill that would have extended a freeze on the state’s renewable energy goals.

While Republican President Donald Trump has said his focus will be on reviving the long-struggling coal industry by stripping federal environmental regulations, governors and legislatures — even in some coal-producing, conservative states — have their sights set elsewhere.

As legislative sessions begin, energy analysts say they expect states to continue to advance initiatives that reduce the country’s reliance on fossil fuels. Many states will consider increasing their requirements for how much electricity used in the state must come from renewable energy sources. And more Democratic states are considering whether they should begin to cap carbon emissions to meet their clean energy goals, as California and several states in the Northeast have done in recent years.

The states have always led the country toward greater reliance on renewable energy sources, and they will continue to do so even if they don’t have the support of the incoming administration, said Gabe Pacyniak, a program manager at the Georgetown Climate Center, which helps states implement clean energy policies. Economic factors, such as the rapidly declining cost of wind and solar production, will help continue that trajectory, Pacyniak said.

In the last two months alone, the Republican governors of Illinois, Maryland, Michigan, Ohio and Vermont have announced initiatives or signed bills that will push their states to increase their use of renewable energy. These are well-respected, “card-carrying conservatives who understand the benefits of the clean energy agenda,” said former Democratic Gov. Bill Ritter of Colorado, who is now director of the Center for the New Energy Economy at Colorado State University.

Under a federal administration that opposes renewable energy mandates, states are likely to join regional climate initiatives, said Vicki Arroyo, executive director of the Georgetown Climate Center. Groups of states will talk about responding to climate change, supporting the use of electric vehicles, and uniting to buy clean energy, she said.

Some states have been resistant to clean energy policies, and they are likely to get a break under Trump, according to Arroyo and others who monitor energy policy. Trump has said he wants to eliminate federal regulations imposed by the Obama administration that stand in the way of greater use of fossil fuels.

Twenty-eight states sued the Obama administration to block the Clean Power Plan, which forces states to cut carbon dioxide emissions. The U.S. Supreme Court has put the regulations on hold while the case is litigated. And 13 states filed a lawsuit this month to block another rule that puts new restrictions on coal mining near waterways. Trump could decide not to defend those lawsuits, or work with the Republican-led Congress to repeal the laws.

Meanwhile, the cost of solar and wind production is declining, and the country’s reliance on renewable energy is growing. About 13.3 percent of electricity in the U.S. was generated by hydroelectric, wind, solar and other renewable sources in 2015, up from 7.7 percent in 2001. 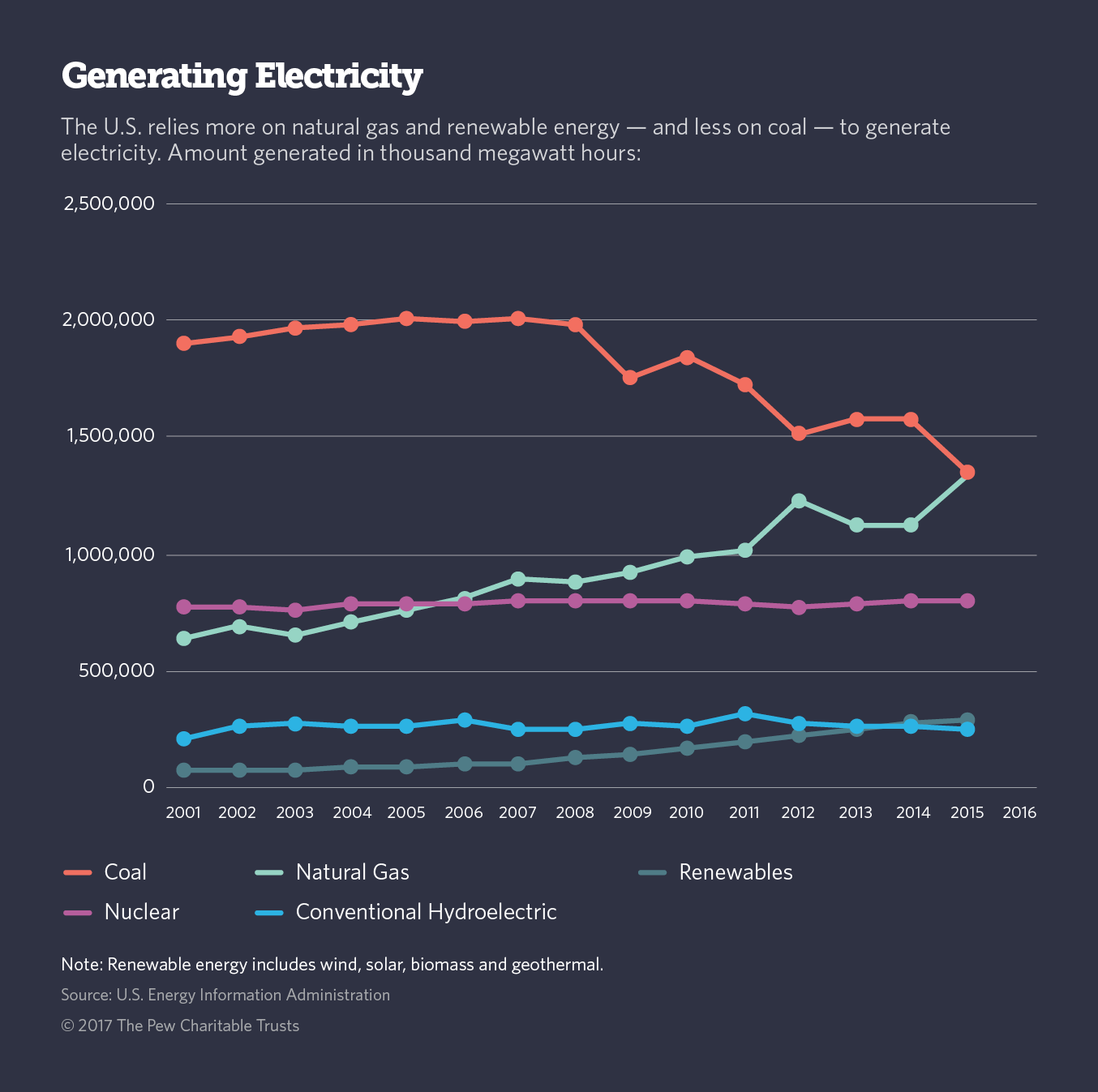 Those two factors are prompting lawmakers in some states to reconsider special benefits for the renewable energy industry. Many states are expected to consider decreasing the money solar customers get for feeding electricity back into the grid. Utility companies, which are losing money as more electric customers switch to solar, support the efforts.

In Ohio, the Legislature may attempt to overturn Kasich’s veto. And in Wyoming, a lawmaker has filed a bill that would impose a fine for using electricity produced using wind or solar.

Twenty-nine states have set goals for renewable energy use by passing what’s referred to as a renewable portfolio standard.

As states start to reach the deadline for those goals, many will consider extensions, said Aliza Wasserman, a program director at the National Governors Association’s Center for Best Practices. Others will consider setting more ambitious goals.

In Maryland, lawmakers last year approved an increase to the percentage of energy required to come from renewable sources, from 20 percent by 2022 to 25 percent by 2020. Republican Gov. Larry Hogan vetoed the bill, but clean energy groups are pushing for an override.

Other states, however, may try to make it easier to hit renewable energy goals — though not by encouraging more use of wind or solar. In Arizona, for instance, electric utilities are required to generate 15 percent of their energy from renewable sources by 2025. A proposal from a state utility regulator would add nuclear power to the list of energy sources that count to hit this target, which would reduce the need to rely on wind, solar and other renewables.

And efforts by the oil and gas industry and its allies to eliminate the portfolios are likely to continue.

In North Carolina, Americans for Prosperity, a conservative advocacy group funded by industrialists Charles and David Koch, has said one of its priorities this year will be to repeal a 2007 plan that requires utility companies to provide 12.5 percent of electricity through renewable energy sources by 2021.

Foes of North Carolina’s renewable targets say they increase the price of electricity for consumers. But the Legislature rejected similar repeal efforts in 2013 and 2015 after lawmakers, including many from rural areas where many solar farms are located, said the industry created jobs and generated local tax revenue.

A study released last year by the U.S. Department of Energy found that state renewable portfolios play an important role not only in protecting the environment, but also in creating jobs. The U.S. added more than 73,000 new solar jobs and 25,000 new wind jobs last year, the agency said in a report released this month.

As the use of solar power in homes, businesses and schools increased, many states adopted net metering policies, which allow customers to feed any surplus electricity they produce back onto the electrical grid for other users, and get credit on their utility bills for what they contribute.

But non-solar customers and utility companies are increasingly fighting those policies because they tend to push up rates for non-solar users and utilities say solar users aren’t paying their fair share for maintaining the electrical grid.

One way they may do this is by decreasing the rate that solar customers are credited for contributing surplus energy.

One big debate to watch this year will be in Utah, according to Sean Gallagher, vice president of state affairs for the Solar Energy Industries Association. Rocky Mountain Power, a utilities company, has proposed lowering subsidies for new solar customers. The state Public Service Commission will consider the proposal this year.

Nevada started phasing out net metering in 2015, causing solar companies to announce they were ceasing operations in the state. The utility commission and the Legislature are expected to take up the issue again this year, Gallagher said.

In Indiana, a bill has been introduced that would ban net metering by 2027. It would also prohibit solar users from using any of their own electricity. They would be required to sell it all to the grid at a low rate, and then buy it back at a higher rate.

In Wyoming and other coal states, incentives for renewable energy are often seen as competing with coal, said Chuck Mason, an economist at the University of Wyoming’s Center for Energy Economics and Public Policy. As the coal industry continues to struggle in the state — with two plants announcing layoffs in the last year — efforts are increasing to protect coal’s future.

A bill was introduced this month that would fine utility companies $10 for every megawatt hour of electricity generated for customers in the state using wind or solar. And Mead, the governor, says one of his top priorities continues to be coal. He said this week he hopes Trump will reduce regulations on coal, support research for advanced energy technologies and innovation, and encourage domestic energy production.

A state-funded research center is opening there this year that will study how to capture the carbon dioxide produced during coal mining and use it for something else.

More states are bound to explore caps or fees on carbon dioxide emissions this year, Ritter said. These laws are becoming more common as states attempt to meet their renewable goals.

In Oregon, the goal is to reduce emissions to 75 percent below 1990 levels by 2050. Lawmakers have considered bills in recent years that would require energy producers to reduce their carbon dioxide emissions, either through a cap-and-trade program or through an emissions tax, said Colin McConnaha, senior climate policy adviser for the state’s Department of Environmental Quality.

McConnaha’s department was tasked by the state in the most recent budget bill to study the best way to proceed. It found that a cap-and-trade program would offer the most benefits, with the same level of greenhouse gas reductions but lower costs, McConnaha said.

A bill has already been proposed this year for a cap-and-trade law, and McConnaha said his hope is the study, to be released next month, will inform that discussion.