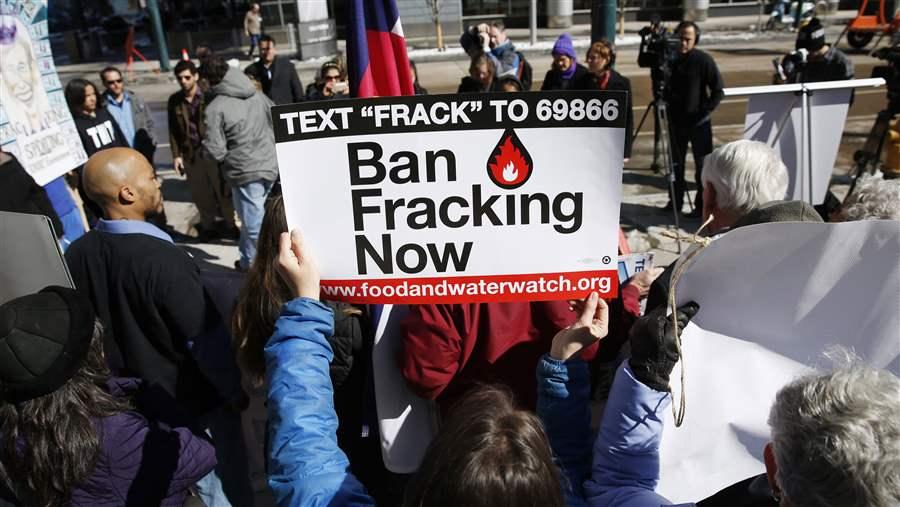 Activists in Denver call for a ban on fracking in 2015. The Colorado Supreme Court ruled that state regulatory power supersedes local bans on fracking. Fracking is one of many policy issues in which states and cities clash over control.

With the federal government and most states controlled by conservative Republicans this year, Democrats are looking to Democratic cities and counties to stand up for progressive policy.

But they may want to temper their expectations. State lawmakers have blocked city action on a range of economic, environmental and human rights issues, including liberal priorities such as minimum wage increases, in recent years. And the stage looks set for more confrontation between cities and states this year.

Already, state lawmakers in Texas and Arkansas are weighing bills that would ban cities from declaring themselves “sanctuaries” and withholding cooperation with federal immigration officials.

Lawmakers in Kentucky, Virginia and six other states are considering preventing localities from allowing transgender people to use some restrooms that match their gender identity. In Montana, one lawmaker wants to prevent local governments from banning texting while driving.

“We’ve seen a continual uptick in preemptive measures at the state level over the last few years,” said Brooks Rainwater, director of the Center for City Solutions at the National League of Cities (NLC). He expects more of the same this year.

It’s hard for localities to resist preemption, but many are stepping up their efforts. Cities such as Cleveland and Tucson, Arizona, are challenging state laws in court, as are civil rights groups and other organizations that supported the policies that states are blocking. Mayors across the county, from Washington state to Florida, increasingly are teaming up to lobby at state capitols and rally public opposition to laws that limit local control.

“All we can do is kind of maneuver, dodge and sue, and try to protect ourselves [from preemption] as best we can,” Philadelphia Mayor Jim Kenney, a Democrat, said at an event last week hosted by the Center for American Progress Action Fund, a liberal Washington, D.C., advocacy group.

States vary in the amount of power they give their cities and counties. Ultimately, however, states have the power to decide what localities can or can’t do.

“In the United States all power originates from the states. It was the states that created the federal government, and it’s each state constitution that creates county and local governments,” said Arizona state Sen. John Kavanagh, Republican co-sponsor of a law passed last year that penalizes cities that disobey state law.

Kavanagh said that Arizona tends to step in and limit local control over public safety and constitutional issues, such as gun rights. “The real argument,” he said, “is how much preemption is too much?”

Preemption has become more common partly because cities have grown bigger and more powerful over time, and more likely to experiment with policy. “You’re seeing all this innovation percolate from the ground up,” Rainwater of the NLC said.

Nearly two-thirds of Americans live in cities, according to the latest U.S. Census Bureau estimate. New York City, Los Angeles and Chicago, the nation’s three largest, each produce more economic output than all but six states, according to the nonprofit United States Conference of Mayors.

Political and philosophical differences also play a role in preemption fights. Republicans now control both chambers of the legislature and the governor’s office in 24 states. Mayors who ran as Democrats or who are affiliated with the Democratic Party control 78 percent of the nation’s 40 largest cities. 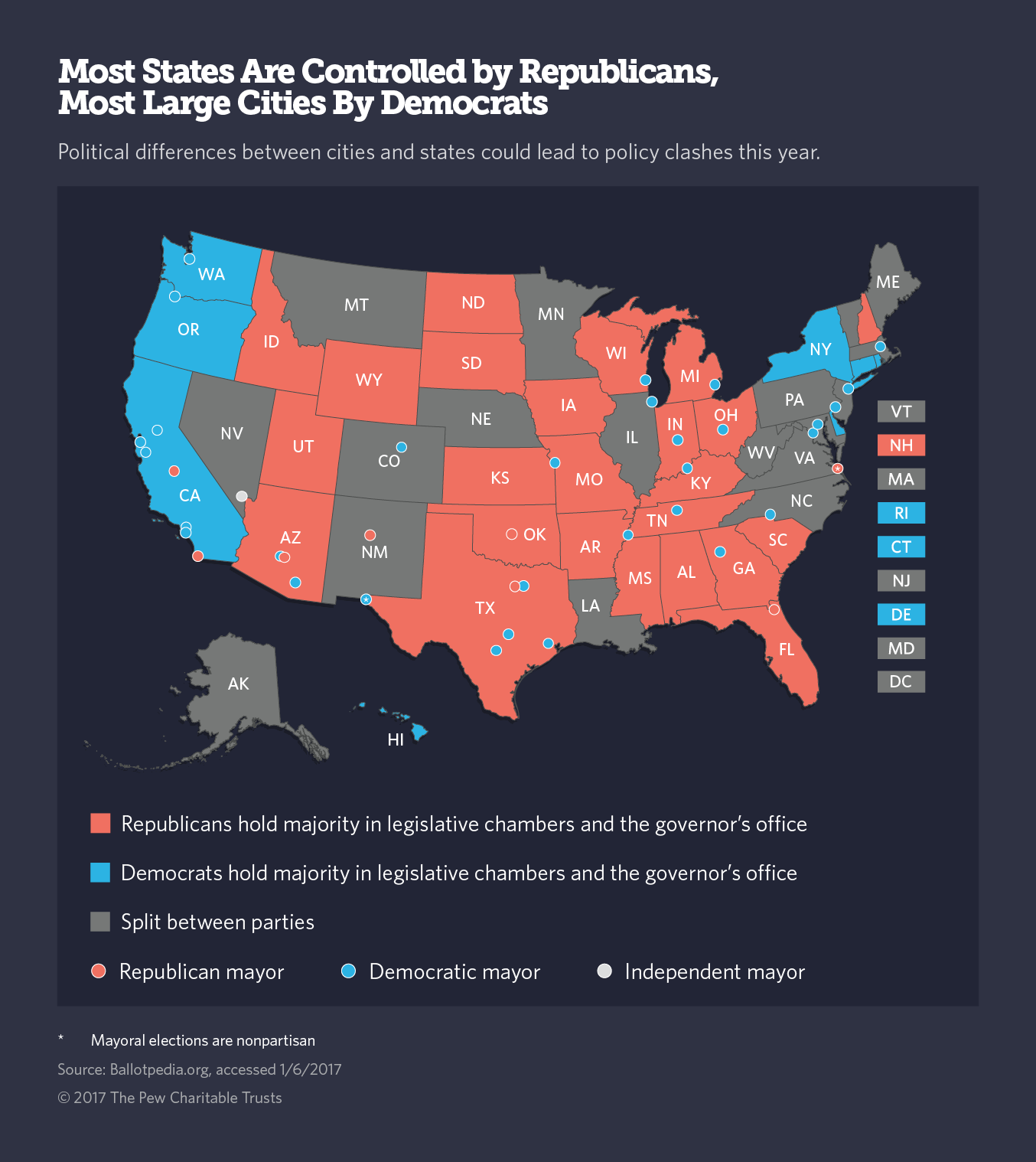 Model preemption bills circulated by the American Legislative Exchange Council, a group of free-market oriented state legislators, corporate interests and private foundations, have targeted liberal priorities such as raising wages and limiting hydraulic fracturing, or fracking, a controversial method of extracting oil and gas from rock.

About 32 states now prohibit localities from regulating ride-hailing companies such as Uber, 23 ban raising the local minimum wage, 15 ban cities from requiring companies to offer sick days, and three ban anti-discrimination ordinances that protect lesbian, gay, bisexual and transgender residents, according to the tally kept by the Partnership for Working Families, a network of left-leaning advocacy groups.

“If people had a sense of the number of threats to local decision-making there are — either under consideration or that have already been passed by legislatures — their heads would spin,” said Tallahassee, Florida, Mayor Andrew Gillum, a Democrat.

Cities Are Pushing Back

Many cities and other opponents of preemption laws are challenging them in court. Dayton, Ohio, for instance, has asked the state Supreme Court to review a 2014 law that places strict restrictions on red light cameras. The American Civil Liberties Union and Lambda Legal have sued to stop North Carolina’s “bathroom bill.”

Civil rights groups are suing Alabama’s governor and attorney general over a law that bans local minimum wage increases, arguing that it violates the U.S. Constitution. The lawsuit argues the ban disproportionately hurts African-Americans and prevents heavily African-American towns from advancing a policy that would help their residents.

“[The Alabama lawsuit is] an example of a situation where states’ exercise of control over a locality hearkens back to a legacy of institutional racism and white supremacy in that state,” said Ben Beach of the Partnership for Working Families. The same legal argument could be used elsewhere, he said, because in many states majority-white legislatures are taking power away from diverse cities.

Mayors can be more effective advocates for local control if they work together, Tallahassee’s Gillum said. Earlier this month, he launched his Campaign to Defend Local Solutions, a nonpartisan coalition intended to unite local leaders across the county and rally the public against preemption.

The tension between cities and states isn’t all political; it’s also a philosophical debate over how much leeway cities should have to govern themselves. “This is really about cities asserting the rights of cities … to decide for themselves, consistent with their own community’s values, what solutions are in the best interest of their community,” Gillum said of his coalition.

Progressive groups also are turning to ballot initiatives to further causes blocked by states, such as minimum wage increases and mandatory paid leave. “We know that voters tend to support, and strongly support, these issues,” said Jonathan Schleifer of the Fairness Project, a nonprofit that funds ballot initiative campaigns.

There’s still plenty of room for cities and states to cooperate this year, regardless of political differences, said Bruce Katz, who studies cities at the Brookings Institution, a centrist Washington, D.C., think tank.

“We’re probably spending a little bit too much time talking about the conflict side, and not talking enough about cooperation,” he said.

City and state leaders typically set politics aside to tackle big projects, such as investments in infrastructure, Katz said. They also team up to fight federal policy they don’t like, such as budget cuts.

Conflict over one policy doesn’t mean that cities and states can’t cooperate on related policy. Colorado lawmakers angered environmentalists when they prohibited local bans on fracking, for instance. But the state and cities have worked together to promote clean energy, another priority for environmentalists, said Carl Pope, the former head of the Sierra Club who now advises former New York City Mayor Michael Bloomberg on bringing cities together to fight climate change.

Not all preemption laws leave local leaders fuming. Last month, local officials in Cleveland asked the Ohio Legislature to ban cities from raising the local minimum wage. They were worried that activists’ push to raise the wage floor to $15 an hour would hurt Cleveland’s economy.

State lawmakers play a major role in advancing the quality of Americans’ lives, from helping to protect the air we breathe and water we drink, to educating our children. By researching emerging topics and developing 50-state comparisons, Pew identifies innovative approaches states are using to help solve complex challenges.