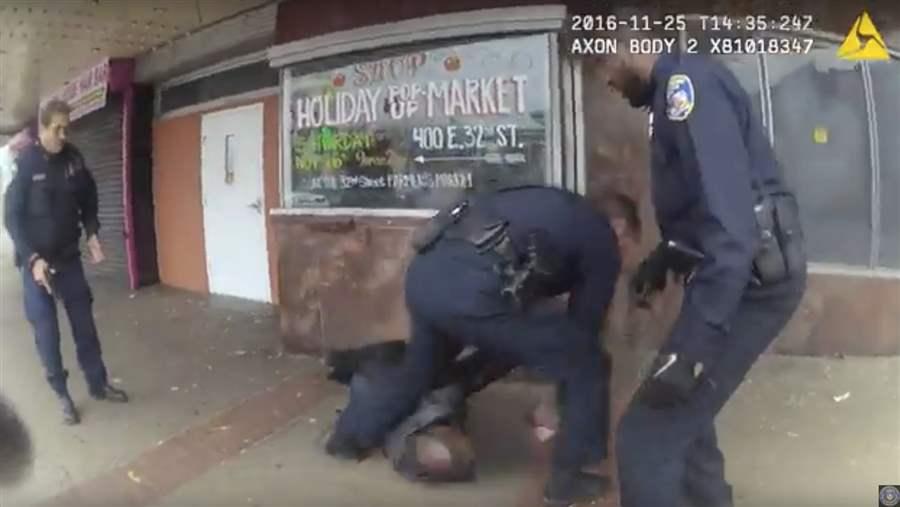 Police body camera footage captures images of officers attending to a man they shot on a street corner in Baltimore. The man had been threatening people with a knife.

The American Civil Liberties Union has released an updated version of its model policy for regulating how police-worn body cameras should be used and under what circumstances the footage they capture can be released.

The model law suggests that most body camera footage shouldn’t be released unless there is a strong public interest, such as a use of force by police or a complaint against an officer that outweighs privacy issues.

The proposal also suggests that police be prohibited from using “investigative privilege” to deny the release of video and that videos that show death or grievous injury be released within five days of a public request.

Over the last two years, in response to high-profile police-involved deaths, law enforcement agencies have hurried to strap body cameras to their officers.

The cameras have been met with praise for addressing demands of greater police transparency and protecting police from accusations of wrongdoing. But the devices have been implemented with limited regulation, and the rules that do exist vary greatly from state to state.

At least 21 states and dozens of municipalities have instituted policies that range from treating body camera footage like other public records to imposing outright bans on releasing footage.

Already, body camera policies in New Hampshire and Parker, Colorado, have mirrored some of the ACLU’s recommendations.