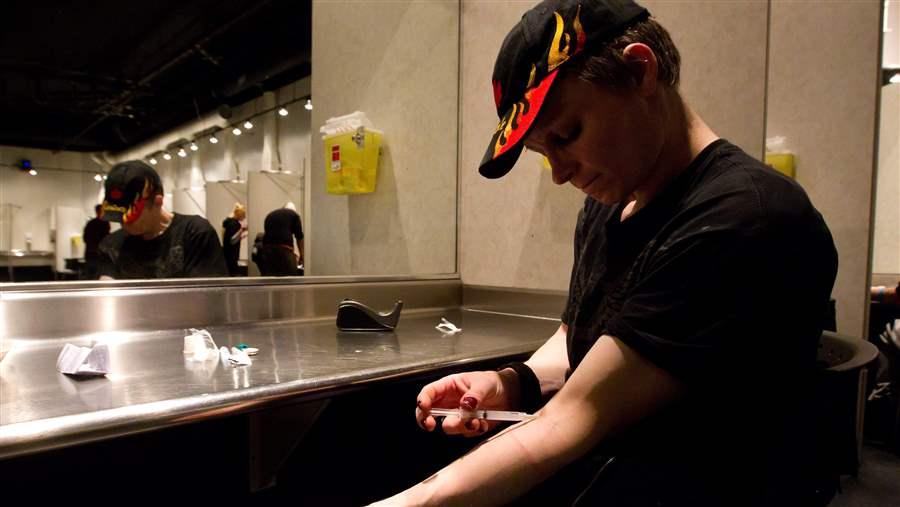 A drug user injects morphine at a safe injection site in Vancouver, British Columbia. The United States could get its first legal injection sites under a plan recently approved in King County, Washington.

According to the Seattle Times, the health board there has unanimously given preliminary approval for at least two heroin injection sites in the county, which is home to 2 million people and includes the city of Seattle. The mayor and the county executive will now consider the issue.

The injection sites would allow opioid users to take their drugs under medical supervision and without fear of arrest. Though such operations exist in 27 cities around the world, there are none in the United States where there were an estimated million heroin users in 2014.

Proponents of the injection sites argue that addicts will use heroin regardless of its legality and that opening a safe place to do drugs can drive down crime in urban areas, prevent fatal overdoses and help guide users toward drug treatment and other health care.

Opponents of the sites say it is never wise to condone drug use and that safe injection locations could violate the federal Controlled Substances Act, which prohibits drug possession as well as operating a place where people use drugs.

Last spring, the mayor of Ithaca, New York, Svante Myrick, proposed an injection site as a solution to that city’s growing opioid abuse problem, but that plan has yet to move forward.

In New York’s Tompkins County, a jurisdiction of just over 100,000 people that includes Ithaca, at least 14 deaths were drug-related in 2014, up from six in 2010. An addiction treatment center there reported that more than a quarter of its admissions in 2014 were for opioids, second only to alcohol.

“We’re not the capital of heroin in America or even in New York state,” Myrick told Stateline in March. “But we’re losing people.”

In 2016 both Maryland and California considered legislation to establish injection sites, but neither advanced.