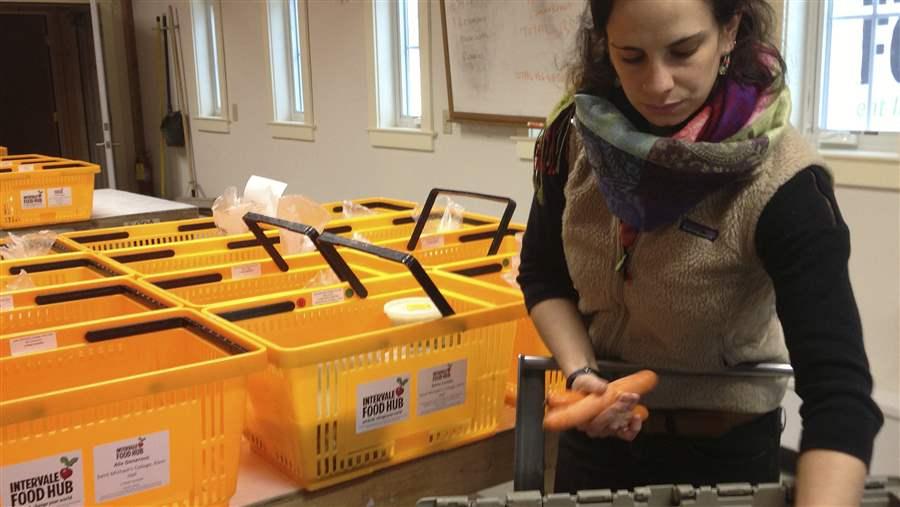 A worker at Intervale Food Hub in Burlington, Vermont, packages carrots as part of a weekly delivery of locally grown food.

In New York City, where shoppers and diners can find delicacies from all over the world, there is hefty demand for food grown closer to home.

The taste for products from farms in the Northeast has led South Bronx-based Greenmarket Co., a nonprofit regional food distributor that serves as the middleman between farmers and buyers, to constantly expand the size and scope of its operation over the last half-decade.

The state of New York has taken notice of its role in the regional food supply chain and in August allocated $15 million of the $20 million needed to build Greenmarket’s new 20,000-square-foot distribution center, commonly known as a food hub. The hub’s staff, which is raising the remaining money from other public and private funders, expects to move in by 2019 and eventually sell $18 million worth of produce, grains, eggs, maple syrup and honey a year.

Like New York, other states such as Michigan, Minnesota, Ohio and Vermont, and the federal government are investing in food hubs as a way to connect small and midsize farmers, who may not have the volume or do not have the capacity to work with large food wholesalers, with businesses and consumers to increase sales.

“It’s not just about buying from local producers but being able to tell the consumer, ‘This is from Farmer Jane, and Farmer Jane has this much acreage, and she grows her food this way,’ ” said James Barham, an agricultural economist for the U.S. Department of Agriculture.

Today, there are more than 400 food hubs across the country, about 30 percent of which are nonprofits. Most are not as expansive or expensive as Greenmarket has become and only require a couple hundred thousand dollars to get off the ground.

In addition to $15 million in federal funding through the 2014 Farm Bill, financial support has come from other federal grants, venture capitalists, private foundations and states. Last year, lawmakers in Minnesota, New York and Ohio allocated money to develop and expand food hubs.

Michigan State University is home to a food hub network, and the University of Vermont offers the nation’s first professional certificate in food hub management.

It costs farmers to get their food to consumers, whether they deal with a regular distributor or a food hub, Fisk said. “At least this way they’re getting a better price and they’re probably getting more services.”

The growth in locally sourced food, a market that totaled $12 billion in sales in 2014 and could reach $20 billion by 2019, coincides with rising consumer demand for healthier fresh food that is often grown organically and with environmentally friendly practices.

What’s more, midsize farmers are typically too large to rely on those channels alone to sell all their food, and lack the volume and distribution resources to sell at a wholesale level or on their own the way big producers can.

Food hubs have existed in some form for more than 40 years. But their popularity increased dramatically about a decade ago, as consumer demand increased and restaurants, grocery stores and institutions such as hospitals and schools increasingly wanted to say they were selling and serving food that is healthy, locally produced and sustainably grown.

Enter a new wave of food hubs like Greenmarket, which began in 2009 when its parent organization GrowNYC took over a wholesale farmers market that featured nine farmers. Now, between that market and the food hub, the group works with about 75 farmers and has grown from $400,000 in annual sales in 2012 to almost $3 million.

“[We’ve] identified a model that lets us continue to pay farmers what they need to stay in business, and make sure that food is going all over in a smart and economically sustainable way,” said Michael Hurwitz, Greenmarket’s director.

At Red Tomato, a 20-year-old food hub in Plainville, Massachusetts, sales growth, which has reached as high as 32 percent in a year, meant having to rework the business model.

With a network of more than 50 farms spread from Vermont to New Jersey, Red Tomato’s operators decided to sell its fleet of trucks and its warehouse, and outsource shipping and storage so paid staff could focus on coordinating the supply chain and promoting farms along with the benefits of buying local food.

“From the beginning, Red Tomato’s goal was to give the farmers a place and a voice in the market,” said Susan Futrell, the hub’s marketing director, who said grocery chain Whole Foods is one of its biggest buyers.

“At a certain point, you have to figure out, [how] are you going to get higher volumes of food to more people?”

The success of food hubs can be seen in more than just sales.

Barham from the USDA said hubs can be measured by their effect on farms and farming practices. For example, net revenue going into small and midsize farms — the businesses food hubs are designed to assist — has been increasing. And farms are using more sustainable practices.

The hubs also may reduce the environmental impact of transporting local produce because food hubs use fewer trucks than would be required if each farmer delivered their products to wholesalers and consumers individually.

Though the two most common models of food hubs sell directly to either consumers or businesses, the term has been used loosely by other groups that don’t focus on aggregating and distributing local food.

For some organizations, using the term food hub has become just a way to talk about local, independently owned food markets or districts of popular restaurants clustered together, while others are using the term for operations that encompass much more.

In Baltimore, for example, a group of developers and nonprofits are using the term to describe a 3.5-acre campus in a neighborhood with few options to buy healthy, affordable food on the city’s east side. The $23.5 million project is expected to include a food stand, garden center, commercial kitchens, job training facilities and space for an urban farm.

A similar model, referred to as a “food port,” was attempted in Louisville, Kentucky, but was scrapped last year when one of its planned tenants backed out.

“I think it’s a great way to go, but not all cities are committed to that,” Fisk said. “It’s a real-estate-heavy model.”

Massive projects like Baltimore’s might be out of reach for more rural areas that lack the economic development opportunities of big cities, he said.

Instead, smaller, traditional food hubs that make up the 400 or so tracked by the USDA can connect far-flung farmers with urban food systems and help with other needs like food safety training or product marketing.

“Building infrastructure such as food hubs allow[s] farmers to do better and for kids to stay in their communities,” Fisk said.