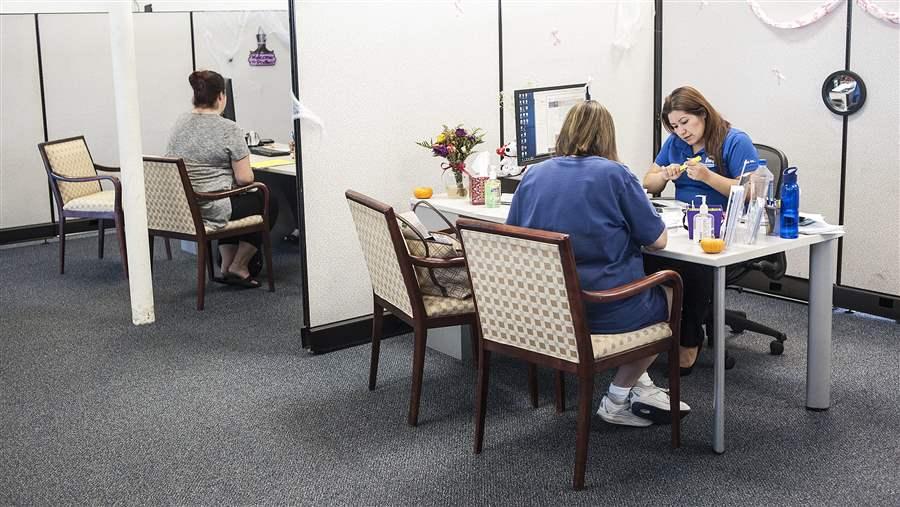 People sign up for health insurance through the Covered California exchange in Huntington Beach. President-elect Donald Trump wants to allow insurance companies to sell policies across state lines, but critics fear the plan would lead to higher premiums.

On his campaign website, Trump proclaimed that, “by allowing full competition in this market, insurance costs will go down and consumer satisfaction will go up.” He also touted the idea during the second presidential debate, and since the election, Vice President-elect Mike Pence has made the same argument.

The implication is that federal law prevents insurers from selling policies across state lines. That isn’t the case.

Between 2008 and 2012, five states — Georgia, Kentucky, Maine, Rhode Island and Wyoming — passed laws specifically allowing out-of-state insurers not licensed in their states to sell health insurance policies within their borders.

Nevertheless, no insurers have taken advantage of the laws. That’s because entering an unfamiliar territory and creating a network of medical providers is exceedingly difficult and expensive, health policy analysts say.

But many health insurance analysts say that even if insurers were able to build provider networks in new states, it’s not a good idea. The cross-state sale of health insurance would undermine the states’ ability to regulate insurance, they warn, destabilizing their insurance markets and driving up premiums.

All states license the insurers selling policies within their borders and regulate the health plans sold there. Each state has its own rules on the benefits insurers operating in their state must offer, the extent to which insurers can charge different premiums to older customers, and the financial assets insurers must maintain in order to do business in the state. The five states that have moved to encourage cross-border sales have indicated a willingness to set aside some of their own regulations.

Some larger insurers, such as Aetna, do sell policies in multiple states, but any company that does so must be licensed in every state where it operates, and must comply with each state’s laws. (This isn’t the case with “self-insured” employer-based plans that operate in multiple states, or plans in which the employer assumes the financial risk of providing health care benefits to its employees instead of paying a fixed premium to an insurer.)

And an insurer breaking into a new state likely would have to pay providers higher than prevailing rates to lure them into joining a new network.

“It takes a huge investment to get established in the health insurance market,” said Deborah Chollet, a senior fellow at the policy research organization Mathematica Policy Research. “Outsiders would have a hard time getting a foothold.”

With cross-state sales, insurers would be subject to the regulations in the state where they choose to base their operations. Critics say the proposal would encourage insurers to locate in lightly regulated states, but sell their policies nationwide.

If the Affordable Care Act is repealed and cross-border sales proceed, insurers would be free to sell inexpensive, less comprehensive policies to relatively young and healthy people. That would leave behind older, sicker people with greater medical needs, who would end up paying higher premiums for the coverage they need.

“This is just a veiled attempt to allow insurance companies to shop for the most industry-favorable states with the least consumer protections and requirements and allow them to sell those products everywhere in the country,” said UCLA’s Kominski.

Supporters of the idea acknowledge that interstate competition would create some problems, but insist they can be overcome.

Thomas Miller, a resident fellow at the right-leaning American Enterprise Institute, said interstate sales might lead to higher premiums for many Americans, but that new federal or state regulations might be crafted to prevent price-gouging and protect people with pre-existing health conditions.

“People like to put out cartoon, extremist versions of the other side,” Miller said. “Yes, there are nettlesome problems with this idea, but not ones that can’t be solved with a sophisticated approach.”

States’ authority to regulate insurance dates back to the mid-19th century, when New Hampshire appointed the first state insurance commissioner. In 1944, the U.S. Supreme Court ruled that the “business of insurance” was subject to federal antitrust laws. To preserve states’ authority, Congress in 1945 passed the McCarran-Ferguson Act, which exempts insurance from most federal antitrust laws but gives states the ability to regulate the industry.

Many state officials fear that interstate sales of health insurance would undermine their ability to regulate the insurance sold in their state. The insurance commissioner in, for example, California, would be unable to take action against, say, a Wyoming insurer whose products were sold to California residents. Similarly, Wyoming regulators might be disinclined to investigate complaints lodged by out-of-state consumers.

That helps explain the opposition of the National Association of Insurance Commissioners to the idea of cross-border sales. Interstate sales of health insurance, according to the NAIC, would “make insurance less available, make insurers less accountable, and prevent regulators from assisting consumers in their states.”

Trump isn’t the first Republican to propose the cross-state sale of health insurance during his presidential campaign. Sen. John McCain of Arizona did so in 2008 when he was the GOP presidential nominee, and former Massachusetts Gov. Mitt Romney did the same in 2012 when he was the nominee.

Linda Blumberg, senior fellow at the Urban Institute, said it’s peculiar that Republicans, who tend to be the party most concerned about states’ rights, would want to diminish states’ ability to regulate insurance.

“One state should not be allowed to undermine the regulatory environment of another state, and that’s exactly what would happen here,” Blumberg said.

But Michael Tanner, a senior fellow at the Cato Institute, a libertarian think tank, said allowing cross-state sales would advance another Republican goal: eliminating excessive regulation. He said the shift would discourage state regulators from implementing overly burdensome rules that would put in-state insurers at a disadvantage.

The result for consumers, according to Tanner, would be more choices and lower premiums.

“It’s only insurance companies and regulators who dislike people’s ability to go out-of-state,” he said.

Tanner acknowledged that some sick Americans might not pay lower premiums. But he said those with the most serious health issues probably should not have traditional insurance coverage, but instead be enrolled in special, high-risk pools that would be created and subsidized by government.

Trump and Republicans in Congress have vowed to “repeal and replace” the Affordable Care Act. But keeping the law in place would mitigate some of the feared negative consequences of interstate sales.

Without the ACA mandates, some states might allow the sale of cheaper policies with more limited benefits. If unfettered interstate sales were allowed, states desiring higher standards wouldn’t be able to ensure that policies sold within their borders would include them.

The lack of regulation, some insurance analysts caution, would lead to a “race to the bottom” in terms of the quality of the policies, enabling companies to sell plans with limited benefits, yearly and lifetime limits on payouts for medical expenses, and high deductibles and cost-sharing provisions.

Health policy experts say the arrival of those policies would disrupt the insurance markets in the states where they were sold.

“It would create a very skewed kind of competition,” said Edwin Park, vice president for health policy at the Center on Budget and Policy Priorities, a left-leaning research group. “What it would do would be to create a very uneven playing field.”

With the healthiest part of the market migrating to policies offered by out-of-state insurers, in-state insurers would have no choice but to compensate for that loss of business by raising premiums for everybody else.

“It could send the market into a death spiral,” said Eric A. Cioppa, superintendent of the Maine Bureau of Insurance.