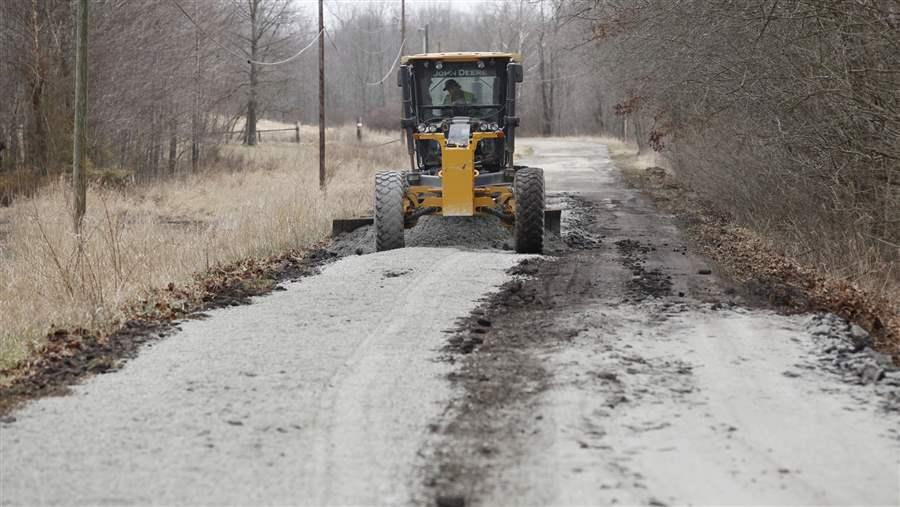 A grader is used to convert a paved section of road to gravel south of Nashville, Indiana.

Editor's note: the caption was updated to correct the location of the gravel road in the photo.

Some roads in Montpelier, Vermont, have gotten a bit rumbly.

Faced with decaying pavement and a long list of capital projects to be funded, officials in Vermont’s capital decided in 2009 to grind up some of the city’s streets and combine the asphalt with underlying gravel.

Since then, just over of a mile of Montpelier’s streets have been converted, said Thomas McArdle, the city’s public works director. Residents largely have embraced the change, he said, and it’s projected to save Montpelier at least half of what it would have spent to pave and maintain the roads over the next 20 years.

Montpelier isn’t alone. As infrastructure budgets have been hit hard by dwindling gasoline tax revenue that typically funds transportation projects, some cities and counties have abandoned plans to repave crumbling roads surfaced at a time when asphalt and labor were cheaper.

Instead, the thoroughfares are getting churned up, and their remains are combined with gravel and other products to create what essentially become dirt roads. Less often, public works departments are allowing the roads to deteriorate to an unpaved surface.

Both types of deconstructed roads can require more routine maintenance than asphalt or concrete, like regular grading and treatments to minimize dust and run off. But they are generally much cheaper than paved roads to install and maintain.

There have been about 70 such conversions, stretching along 550 miles of road in at least 27 states, according to a 2015 review of the projects produced by the National Cooperative Highway Research Program.

In Franklin County, Alabama, safety concerns, complaints from drivers and high maintenance costs led officials to convert a 20-mile stretch of paved road to dirt in 2014. In three Iowa counties, 50 miles of pavement were recycled to create gravel roads between 2013 and 2014.

Laura Fay, a research scientist with the Western Transportation Institute at Montana State University who co-authored the report, said localities need to use grading, dust control and other maintenance, potentially multiple times a year, to ensure the newly unpaved roads are safe and long-lasting.

The cost of paving roads varies by size, condition and location, and can be significantly higher than converting to dirt. For example, resurfacing a paved road in Allamakee County, Iowa, was estimated to cost $100,000 a mile in 2011, but getting rid of the pavement and adding new gravel would only set the county back by $5,000 a mile.

Fay’s report found that converting a paved road to an unpaved one can cost anywhere from $1,000 to $100,000 a mile. The disparity is so wide because jurisdictions use different methods to track what they spend on costs, such as the salaries of road crews that are already on the payroll, she said.

To Pave or Not to Pave?

In more than half the states, some roads have been converted to unpaved surfaces. But the trend isn’t widely discussed among transportation officials, Fay said.

Some officials may fear that residents would be unhappy with a decision to turn their road to dirt, she said.

People in Montpelier got behind the Vermont program in part because officials communicated with constituents about the plan, Fay said.

The conversions in Montpelier began when a couple living on a deteriorating paved road approached McArdle, the public works director, and suggested he convert their street to gravel. He took the proposal to their neighbors, sending letters that explained the city council might be willing to greenlight a move to gravel sooner than it would be able to repave the road.

“We had one road in particular. It was right at the edge of town. It was in terrible condition,” he said. “All we could [do was] patch it.”

And, McArdle said, the city had nothing to lose. “If things don’t work out, the road is essentially prepped for applying pavement.”

Since the projects were completed, people who live on the resurfaced roads have, for the most part, welcomed it, he said.

But not every conversion has gone so smoothly.

In Omaha, Nebraska, people who live along South 113th Street — a quarter-mile dead-end stretch lined by ranch-style homes — said the city caught them off guard when it ground up their asphalt road, leaving it unpaved, in early 2016.

Joseph Skradski, a dentist who lives there, said the road was last paved 35 years ago and large potholes had begun to form in the asphalt. But he wasn’t happy with a dirt road, and, with other residents of the street, complained to the city. Ultimately, they paid half the cost of repaving South 113th Street.

Streets with minimal traffic don’t need to be made of more durable concrete, which is preferred by the city, he said. “They may be like my street, a dead end or kind of off the beaten path, and asphalt works perfect.”

Residents in other parts of the city also complained, and in the summer Omaha officials stopped converting paved streets to dirt and pledged to prioritize funding for road upkeep.

There are, of course, plenty of more isolated, rural places where poorly maintained dirt roads are more than just a nuisance. They can make it difficult for emergency vehicles to reach residents.

“We get that story every now and then,” said Jason Autrey, the public works director in Okaloosa County, Florida. “School buses can’t come down here, ambulance gets stuck, we can’t get services or the trash truck won’t come. Those kinds of things.”

The county, on the west end of the Florida panhandle, is home to 200 of the country’s 1.4 million miles of unpaved roads, most of which are in the county’s rural northern area that butts up against Alabama. These surfaces are largely old private farming roads and livestock paths that have been slowly taken over by a county that can’t afford to modernize them all.

The county of almost 180,000 prioritizes which of its 100 miles of unpaved roads get attention first with a ranking system that considers how many homes, businesses and churches are on a road, how much it costs to maintain, and a cost-benefit analysis of changing its surface.

Beaufort County hasn’t converted any paved roads to dirt, and the affluent, growing community with a strong tax base isn’t likely to do so, said Robert McFee, who runs the engineering and infrastructure department.

“There’s a reason you see jurisdictions going from a paved road to a gravel road,” McFee said. “It’s not because they want to do it, it’s because they have to do it.”