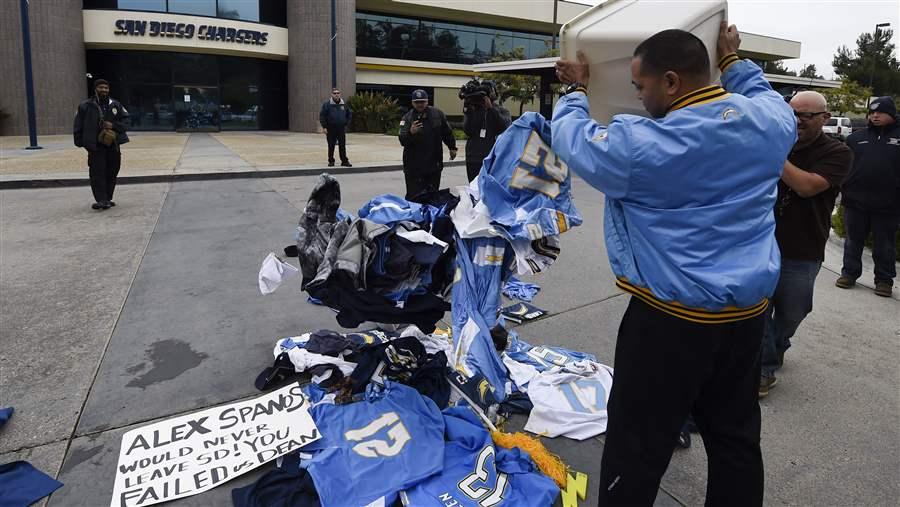 San Diego Chargers fans dump memorabilia in front of their stadium. The Chargers are moving to Los Angeles after San Diegans rejected public funding of a new stadium in November.

San Diego football fans are finding out what happens when their city votes against giving enough tax dollars to professional team owners. They lose their team.

The Chargers are the second NFL team in a year to relocate to Los Angeles. The St. Louis Rams became the Los Angeles Rams after owners decided to move, despite $400 million offered by the City of St. Louis and state of Missouri.

The moves have fueled the debate over whether state and city tax breaks designed to entice professional sports teams are worth the money. Political leaders tout the economic growth the stadiums and sports franchises are said to bring. But many economists maintain that states and cities that help pay for new stadiums and arenas rarely get the payback they anticipate.

San Diego Mayor Kevin Faulconer told the local news media that the city had a reasonable stadium approach but that the Chargers’ owner wanted too much taxpayer money.

“Dean Spanos made a bad decision and he will regret it,”  Faulconer said. "San Diego didn't lose the Chargers, the Chargers just lost San Diego."