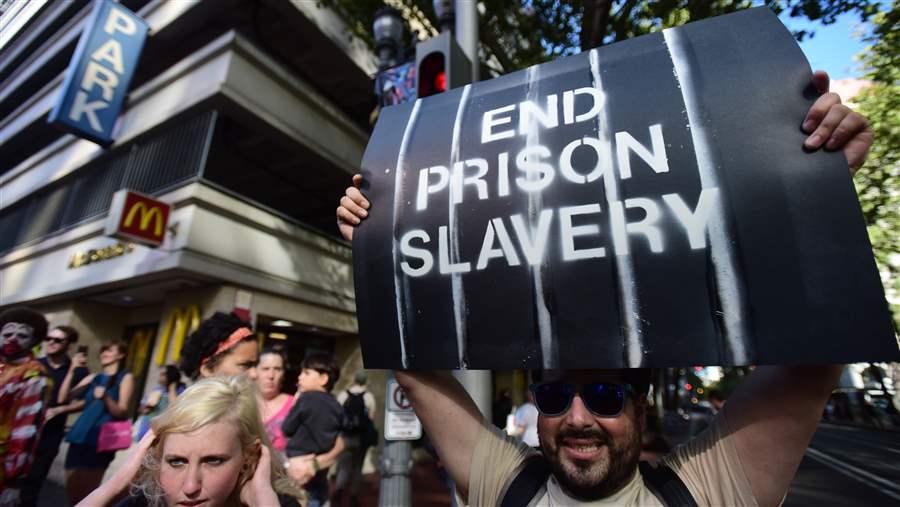 Protesters block a street in Portland, Oregon, during a nationwide day of protests in September against prison conditions. The same day, inmates in 24 states organized a work strike using social media, which prison officials say they shouldn’t have access to.

State prison inmates plan a work strike on Saturday in conjunction with a march in Washington to protest corporate food giant Aramark, which provides meals at more than 500 correctional facilities in the country. Their means of organizing: social media.

Planning for Saturday’s protest duplicates how inmates in 24 states used Facebook, Twitter and YouTube in September to stage a work strike on the 45th anniversary of the Attica prison uprising to protest prison conditions, which they called “modern-day slavery.”

“We connected from our social media platforms,” Bennu Hannibal, an inmate serving a life sentence for murder in Alabama, told Vice News, using a smuggled cellphone to conduct the interview. “All those platforms allowed us to connect with different people and different organizers from around the world.”

In most states, prison officials want to prevent inmates from having easy access to the outside world via social media — and not just to avert prison strikes. They fear prisoners could use social media to stalk a former victim, run crime rings, threaten a witness, arrange contraband drops or find out personal information about prison guards and officials.

“Social media is a problem,” said Bryan Stirling, director of the South Carolina Department of Corrections. “It should concern everybody across the country that this is happening. It’s the unfettered communication to the outside world that should scare everybody.”

Prisoner advocates and some civil libertarians disagree. They argue that bans on social media further alienate inmates already cut off from society and make a successful return more difficult.

Banning the use of social media, said David Fathi of the American Civil Liberties Union (ACLU), “is counterproductive in terms of rehabilitation.

Most states do not have laws that specifically prohibit inmates from using social media, though all states prohibit them from possessing cellphones — and many inmates access social media using contraband phones. Others rely on a third party to post for them. (Most prisoners do not have access to computers. A handful of states allow inmates to buy mini-tablets with limited email access that is strictly monitored by prison officials.)

A clampdown on social media is spreading. In April, the Texas Department of Criminal Justice, the largest state prison system, announced a rule that prohibits inmates from operating a social media account — and bans family and friends from maintaining one for incarcerated loved ones.

Other states such as New Mexico and South Carolina have similar rules. In 2013, Alabama passed legislation outlawing social media use among inmates in state prisons and city and county jails. Under the law, those on the outside who help inmates establish an internet presence are subject to a $500 fine.

Some states, such as Georgia and Indiana, have online tip sites where people can anonymously report inmates whom they suspect are using social media.

In most states, prison officials often try to prevent inmates from setting up social media accounts by concentrating on eradicating cellphones. Without cellphones, they say, it’s virtually impossible for inmates to set up or use Facebook or Instagram.

“If you don’t have a boat, you can’t get across the lake,” said Bob Horton, public information manager for the Alabama Department of Corrections.

Still, Horton said he thinks states should consider revamping or amending laws to include outlawing social media in prisons.

Protected by the First Amendment?

The internet and social media increasingly are a central part of

Research indicates that inmates who maintain connections with family and friends while incarcerated have lower recidivism rates after they are released.

“We should be encouraging prisoners to develop relationships with people who will be there when they get out, and not trying to stop it,” Fathi said.

Sometimes inmates use social media to stay in touch with family members. And sometimes they pay an outsider to operate social media accounts for them.

Sometimes, inmates use social media to highlight poor conditions at prisons, documenting alleged health code violations, moldy walls and leaky ceilings. Sometimes they use social media to goof off or to brag about criminal exploits behind prison walls.

And sometimes they document the abuse that inmates inflict on each other, such as a 2015 photo of a 17-year-old inmate in a Georgia prison.

The youth was beaten in an alleged gang attack and led around on a leash by inmates who took pictures and uploaded them on Facebook. The family found out about the beating when the photos went viral — and before prison guards say they knew the teen had been hurt. The case unleashed a debate about conditions in Georgia prisons and the widespread problem of contraband cellphones.

“Social media provides a level of transparency,” said Wright, who founded the magazine in 1990 when he was serving time for murder in Washington state.

“A picture is worth a thousand words. If you have an operation that you’re proud of and you don’t have anything to hide, you should welcome scrutiny and transparency,” Wright said. “The bottom line is, these prisons are none of the above. They do have something to hide.”

“These regulations don’t just impact the inmate’s right to speech, it impacts everyone else’s right to understand what’s going on in a prison,” said Dave Maass, a researcher with the Electronic Frontier Foundation, an advocacy group dedicated to defending civil liberties on the internet. “An inmate can put up information about abuses going on or conditions, and that can be the only way that information gets out.”

Prisoners are protected by the First Amendment, but prison officials can limit speech for prison safety and security reasons.

Where things get murky is when prison officials try to restrict social media posts by family members. Because the vast majority of inmates do not have access to the internet, they often write to family members who then post the writings on Facebook or Twitter. Restricting the social media activity of family and friends amounts to censorship, Fathi said.

This was put to the test in 2000, when Arizona legislators passed a law making it illegal for inmates to access the internet, either directly or through a third party. The ACLU sued, and in 2003 a U.S. District Court judge found the Arizona law to be unconstitutional.

“Attempts to stop prisoners from using social media with the help of family or friends on the outside are also limiting the rights of free people in the community who haven’t been convicted of anything,” Fathi said.

In 2014, inmates at the Kershaw Correctional Institution in South Carolina published what they deemed the “1st Ever Music Video in Prison!”

Humming and beat-boxing, the group took turns rapping against the backdrop of what appears to be the inside of a grimy prison cell. One stood with his back to the cellphone camera, wearing a shirt emblazoned with “SCDC” for South Carolina Department of Corrections. The video received more than 1.2 million views on a hip-hop website and more than 866,000 views on YouTube.

Some of the prisoners involved were sentenced to solitary confinement, but Stirling, the SCDC’s director, said they did not do their full time in solitary. And, he said, they were punished with solitary confinement because of other violations that were committed in the video.

“These folks have committed a crime. They’re not supposed to post on social media,” Stirling said. “They’re paying a debt to society and we’re supposed to be rehabilitating them. We need to get them in class, get them skills.”

If inmates want to communicate with the outside world, he said, they can do it by writing letters, talking to visitors or speaking to members of the media.