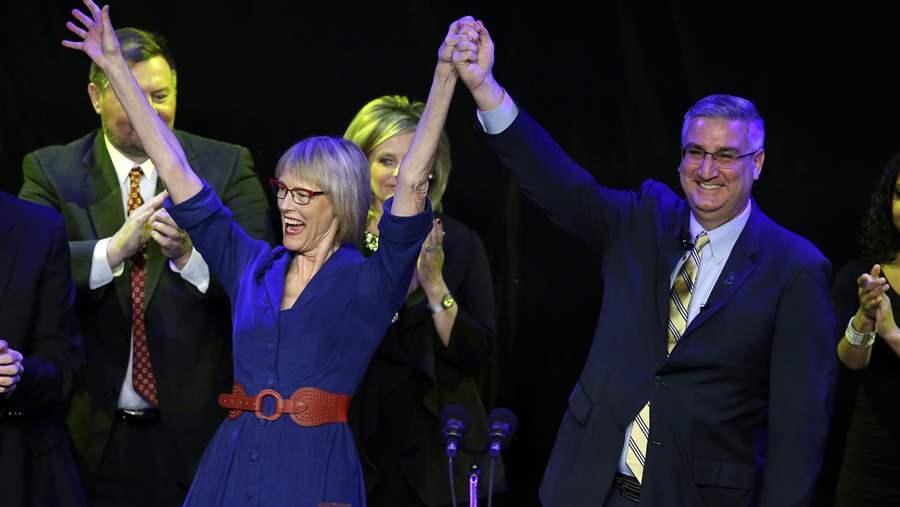 Gov. Eric Holcomb and Lt. Gov. Suzanne Crouch raise their arms in celebration after they were sworn in to office during an inaugural ceremony in Indianapolis. Holcomb has created a drug czar position to coordinate the state’s battle against drug abuse and addiction.

On his first day in office, Indiana’s new Republican governor, Eric Holcomb, signed an executive order creating a new state-level position to coordinate anti-drug efforts, a move at least two other states made last year to turn back the rising tide of opioid addiction.

The person Holcomb tapped for the post, Jim McClelland, former CEO of Goodwill Industries of Central Indiana, will coordinate the drug-related activities of nine state agencies. McClelland also will gauge the impact of state programs designed to reduce addiction, a huge and growing problem in Indiana.

As the opioid epidemic expands, states and cities are attacking the problem on multiple fronts, including law enforcement, public health, emergency response and treatment. States also are creating registries to prevent patients from receiving opioid painkillers from more than one doctor, and working with the medical community to set safer guidelines for prescribing the highly addictive drugs.

"Since 1999, Indiana has seen a 500 percent increase in drug overdose deaths. This is an epidemic tragically affecting Hoosiers from every walk of life in every part of our state," Holcomb said. "This new position will provide the urgent and concerted attention required to effectively reduce the impact drug addiction is having on families, individuals and children."