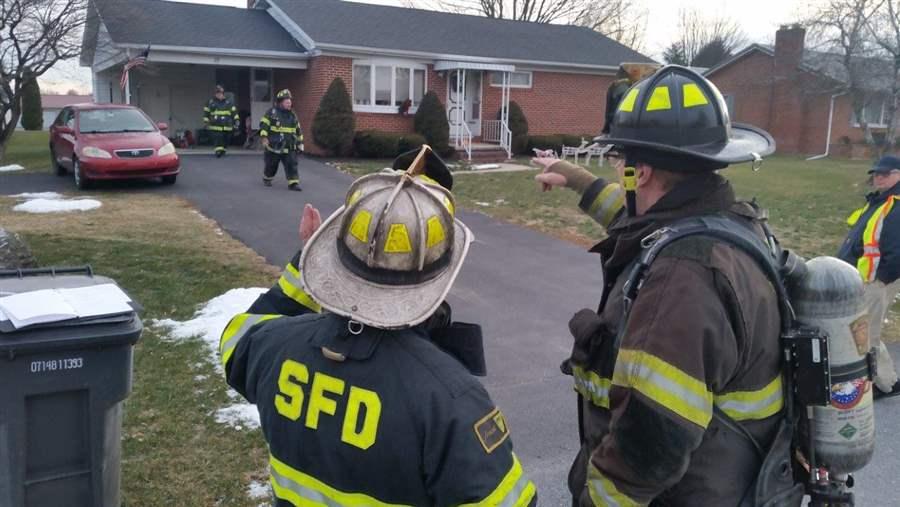 Fire Chief Randy O’Donnell of Shippensburg, Pennsylvania, left, discusses the plan for clearing smoke from a house. All-volunteer fire departments like his are finding it harder to recruit new members.

SHIPPENSBURG, Pa. — Everybody in this fire station was sleeping one recent morning when the alarms started blaring. Six firefighters hopped out of their bunks and pulled their gear over their pajamas. The sun was still coming up when they reached a house where smoke was rising from the basement.

Afterward, back in their pajamas, the young men gathered in the station’s control room. The chief’s son wrote up the report: furnace malfunction in the basement, no injuries, no damage. Then the bantering began — about girlfriends, the holidays and work.

This all-volunteer fire station and the two others in Shippensburg, a factory and university town of about 5,500 people in a central Pennsylvania valley, are vestiges of the past. Firefighters sit around on weekdays playing rummy, and people gather for bingo Friday nights. Yet, the stations are much quieter than they were decades ago, when they felt like the center of the town. And as the community’s interests have shifted from the fire stations, the number of volunteers has fallen.

“Everybody has other things occupying their time,” said Shippensburg Fire Chief Randy O’Donnell.

The number of volunteer firefighters has been falling for decades here and across the country, dropping by about 12 percent from 1984 to about 788,000 in 2014. That has spelled trouble for cities and towns — especially smaller ones in more rural areas — that have always depended on volunteer departments to save thousands, even millions, of dollars every year on salaries and benefits. Many have been forced to hire at least some paid staff.

The decline in volunteers has become more drastic in the last decade, as young people have moved out of rural areas and into bigger cities.

Other states are choosing to forgo state revenue to give income tax credits to volunteer firefighters. Nebraska passed a law last year, and similar laws are on the books in Delaware, Iowa, Louisiana, Maryland, New York and South Carolina. Some of the laws also apply to other emergency responders, such as paramedics.

O’Donnell and other chiefs across the country welcome the tax breaks, which they say help offset the costs of volunteering, such as driving personal cars to and from the station. They say the incentives might convince existing volunteers to stay around longer — but they probably won’t convince others who don’t already have the desire to serve to volunteer.

It’s become harder to recruit volunteer firefighters as family and work environments have changed, said Jack Reckner of the Kentucky Association of Fire Chiefs, which for years has been advocating for a tax credit in the state.

Men — who have always been the majority of volunteer firefighters — are taking a larger role in raising children and more of their wives are working. Commutes are longer. Sports and other activities are pulling families in more directions. Volunteerism, in general, is on the decline.

“Volunteerism is one of the first things that go by the wayside, simply because people can’t afford it,” Reckner said.

States’ reliance on volunteer firefighters varies greatly. In Pennsylvania, about 97 percent of departments are run by all or mostly volunteers, compared to 9.1 percent in Hawaii.

Decades ago in Shippensburg, residents were more likely to work in factories in town. When a call came through, they would run out of their jobs to the station. Now, more work outside Shippensburg, and employers here and across the U.S. are less likely to offer such flexibility.

The job of the volunteer firefighter also has changed, said Dave Finger, chief of legislative and regulatory affairs at the National Volunteer Fire Council. It used to be that firefighters served with little training and requirements. Many states now require firefighters to have a certain number of training hours each year to be certified.

Volunteers also spend less of their time responding to calls, and more time writing reports and fundraising. That’s one thing volunteers say they don’t like about the idea of tax credits — they often lead to more paperwork.

Because of the increased demands, more states have begun considering what benefits they can offer, especially in the last few years as they have come out of recession, Finger said.

The council is asking Congress to help by providing federal income tax credits to all volunteer firefighters, and by extending federal tax exemptions for any state or local benefits that the volunteers receive.

Shippensburg’s neighborhoods used to be full of families, O’Donnell said. He lived down the street from the fire station when he was growing up in the 1980s, and spent all of his free time there.

Back then, there were far fewer calls, and far more volunteers. The 50 or so active volunteers now respond to about 800 or 900 calls a year, for problems such as building and brush fires, and car crashes.

The department gets many of its volunteers from the college, Shippensburg University, and offers firefighters free housing in fire stations. It also attracts residents who work full time as paid firefighters in nearby counties and volunteer on their days off.

It’s crucial to convince people to volunteer while they’re still young, O’Donnell said, before they get married and have children. The department begins recruiting junior firefighters, who can help out but not fight fires, at age 14. They can become full-fledged volunteers at 18.

But many people leave Shippensburg after college, and here and across the U.S. departments are struggling to recruit working-age volunteers. Those who do volunteer are sometimes overwhelmed.

Dick Perry, a volunteer captain in Shippensburg who is in his early 50s, works overnight at a factory in town, and volunteers during the day while his three children are in school. “Because of my schedule, I don’t sleep much,” Perry said.

Volunteer firefighters are estimated to save local governments $139.8 billion annually in pay, benefits, operating and maintenance that would be spent supporting paid departments, according to a report from the National Fire Protection Association, a trade association that publishes firefighting standards and codes.

Despite the benefits, the number of volunteers in the state continues to fall. Financial incentives have “limited value in attracting and retaining volunteers,” according to a report by the New York State Professional Firefighters Association.

In some states, such as Kentucky, it’s been difficult for fire chiefs to convince legislatures to provide tax credits when the states’ budgets are already tight. State lawmakers have pushed tax credit bills in the Kentucky Legislature every year for nearly a decade, but none has been approved. A new bill has been proposed for the current session, which convened last week.

In the last few years, the Legislature has been trying to pass comprehensive tax reform, and tax credits for volunteer firefighters have gotten lost in the shuffle, said Michael “Howdy” Kurtsinger, legislative director for the Kentucky Fire Commission. But this year, with new lawmakers coming in, Kurtsinger thinks it might have a chance.

Reckner said it won’t cost the state much, and it seems like a noncontroversial issue. “You would think the legislators would jump on it, but they won’t.”

In Oklahoma, which faced a budget shortfall of more than $1 billion last year, volunteer firefighters almost saw their tax credit reduced. The state gave up $723,000 for 2,239 claims of up to $400 in tax year 2014. Amid a push to cut back on all tax credits, a bill was proposed that would have cut the firefighter tax credit by 25 percent, but it failed.

In Shippensburg, town officials said they would need to increase taxes significantly to bring on paid firefighters, something they are unlikely to do.

Because many other Pennsylvania towns are in the same situation, the Pennsylvania Fire and Emergency Services Institute is advocating for more benefits for volunteers. It is putting together what it calls a “cafeteria menu of incentives” to advocate for in the Legislature this year, said Donald Konkle, the institute’s executive director.

But Dakota Lanious, a volunteer who lives in a firehouse and helps with recruitment, said while he thinks financial incentives are a nice gesture, only a “very special type of person” wants to be a volunteer firefighter, and tax credits won’t be a deciding factor.

He and other volunteers in Shippensburg say they volunteer because they like helping their community. That, and for the camaraderie.

The firefighters here are so close they eat Thanksgiving dinner at the station. They know one another’s families, and keep tabs on each other’s school work. Punishment for missing a call is a headlock.

As Lanious said, “This is my family away from my family.”