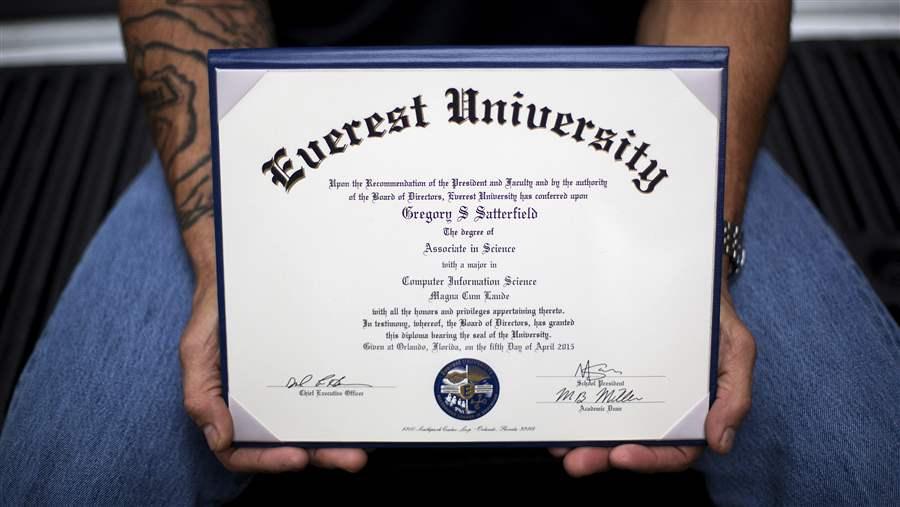 Shane Satterfield, a roofer who owes more than $30,000 in debt for an associate’s degree, holds a diploma from his alma mater, a for-profit college company that failed in 2014.

More than 800 postsecondary programs risk of losing federal funding because they saddle graduates with too much debt, the Department of Education said this week.

The department analyzed income and debt information for graduates of over 8,600 career-focused programs at over 2,000 colleges and universities. Two-thirds of the programs analyzed were for-profit colleges.

Under the Obama administration’s gainful employment rule, career programs in fields such as welding, teaching, criminal justice and graphic design must ensure that graduates earn enough money to manage their student loan debt.

Many programs wouldn’t be able to recruit enough students to survive if federal grants and loans were cut off. The rule has been opposed by Republicans in Congress, and it’s possible that President-elect Donald Trump could eliminate it.

Ninety-eight percent of the programs currently failing to meet the federal standard are offered by for-profit institutions, the latest numbers show. In a call with reporters, federal officials emphasized that no community colleges failed to meet the standard.

That doesn’t mean that student debt isn’t a problem for community college students, however. As Robert Kelchen, an assistant professor at Seton Hall University, notes on his blog, the federal rule just considers graduates, not dropouts. Students who enroll in a college program but drop out without earning a degree or certificate often find themselves in worse financial shape than students who graduate.