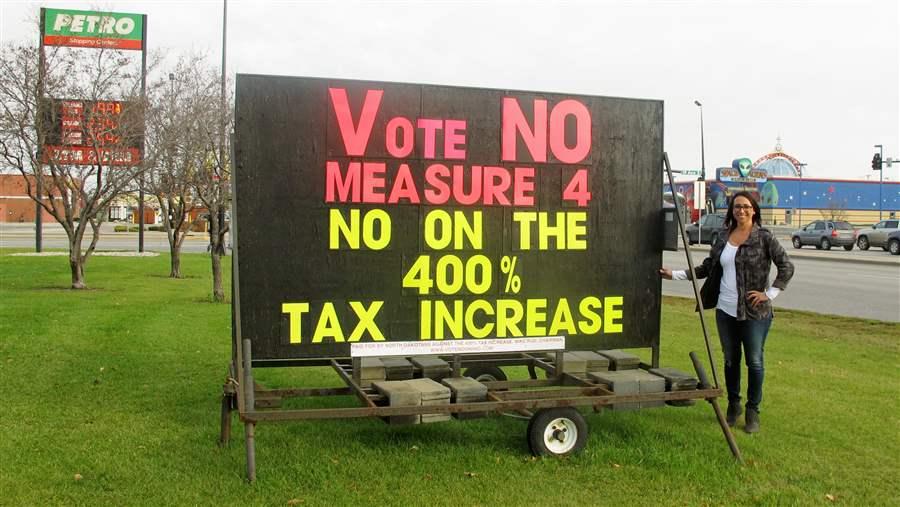 Voters in three of four states rejected tobacco tax hikes that were on the November ballot, swayed by a general anti-tax mood but also by the tens of millions of dollars tobacco companies spent to influence the outcome.

Between 1980 and 2015, voters approved nearly 70 percent of the 32 tobacco tax hikes that appeared on statewide ballots, according to Ballotpedia, a nonpartisan research group that has tracked them. But in November, voters in North Dakota, Missouri and Colorado defeated measures that would have increased taxes by 23 cents to $1.76 on a pack of cigarettes. In all three states, opponents of the initiative dramatically outspent supporters.

The exception was California, where voters approved an increase of $2 a pack, bringing the total to $2.87 per pack. In that state, tax backers did not spend as much money as opponents, although they spent enough to compete.

Opponents ponied up at least $93 million to defeat the measures in California, Colorado and North Dakota, likely breaking all records, according to Ballotpedia. The total does not count Missouri, where the strange structure of two competing ballot measures split contributions.

Tobacco taxes generally are among the least controversial taxes to raise because they affect a small number of voters and the dangers of tobacco use are widely known. State legislatures, in particular, are fond of raising so-called “sin” taxes, as opposed to approving increases in broad-based taxes such as those on income or property. But November’s electorate may have been especially tax averse.

“I think there was a stronger anti-tax mentality among the folks that showed up to vote, and some of that carried over to the tobacco taxes that were on the ballot in the four states,” said Scott Drenkard, an analyst with the nonpartisan Tax Foundation.

Josh Altic, who tracks ballot measures for Ballotpedia, said that during the 1990s, publicity surrounding the 1994 lawsuit that attorneys general of 46 states filed against the tobacco industry to recoup tobacco-related health care costs helped propel tobacco tax hikes. In 1998, the four largest tobacco companies agreed to pay a $206 billion settlement.

Altic said that has changed in the years since. Now, voters are more inclined to examine the details of such proposals, such as the amount of the tax and where the money is going.

But anti-tobacco advocates insist that the main reason most of the 2016 tax increases failed was the money spent to defeat them.

In North Dakota, opponents led by tobacco giants R.J. Reynolds and Altria raised $3.6 million to oppose the measure, compared to $21, 691 raised by supporters. In Colorado, opponents raised $18.2 million to supporters’ $2.5 million, with $16.9 million of the opponents’ total coming from just one source, Altria.

In California, tobacco tax opponents, led by Philip Morris and R.J. Reynolds, raised $71.3 million, nearly double what the supporters spent. But the measure still passed because the $35.5 million supporters had was enough to communicate their message widely, even in a big state where it is expensive to advertise.

“Everybody will tell you elections aren’t cheap, they come with a very steep price tag,” said David Howard, spokesman for the R.J. Reynolds Tobacco Company. “We will participate in the process. If there are continued ballot initiatives in coming years that are proposing onerous taxes on our products we will be part of the campaign.”

‘No’ in North Dakota

North Dakota has never been a very friendly place for tax increases. The state last raised tobacco taxes in 1993. But opponents of the ballot measure didn’t take any chances, outspending supporters 170-1.

The message, he said, was one of fairness: That only smokers, who comprise just 15 percent of the state’s population, would be taxed to pay for health care for veterans and low-income people.

“Everybody has to pitch in and pay for that, not just 15 percent of the population,” he said. “We bombarded [voters] with a lot of brochures and fliers, and our message really hit home.”

The coalition opposing the measure, “North Dakotans against the 400% Tax Increase,” also argued that the measure was not specific enough about how the money would be spent, despite advocates’ insistence to the contrary.

John Schachter, spokesman for the Campaign for Tobacco-Free Kids, which backed the proposed increase, said the amount of money spent in North Dakota to defeat the measure was unprecedented and too much for proponents to match. “There are limits to what you can do against the millions being spent,” he said.

Schachter said foes of the increase successfully shifted the debate from one of “smoking is bad for you, so it should be taxed” to a question of how the tax money would be spent. “In North Dakota,” he said, “there was this ‘blank check’ argument, which was misleading.”

Michael Siegel, professor at Boston University’s School of Public Health who has studied tobacco and taxes, said the shift in the debate shows that advocates for taxing tobacco more must develop carefully crafted messages to appeal to voters if they hope to overcome the deep pockets of opponents.

Siegel cited passage of the tax increase in California as an example of how proponents were able to prevail against the “blank check” argument by offering voters a detailed message that tax proceeds would go to Medi-Cal, the state’s health insurance program for low-income people.

“The [pro-tax] coalitions were totally outspent,” he said. “The situations where the health groups are organized, have a carefully crafted message, and do have a moderate amount of money they can spend have been successful.”

A Switch in Missouri

In Missouri, voters faced two competing tobacco tax measures. One would have increased the cigarette tax by 23 cents a pack, the other by 60 cents.

The debate was different there: Health groups opposed both measures, worried that neither of the increases would be sufficient to deter smokers and that a small increase now would impede efforts to get a larger increase later.

Douglas Luke, professor of public health at Washington University in St. Louis, said the confusion around the dueling measures doomed both. He said the mess may have set the stage for another try at a tobacco tax in two years.

“We’ll get it right eventually,” he said. “People around the country and in Missouri are supportive of effective tobacco control measures that particularly help kids avoid tobacco.”