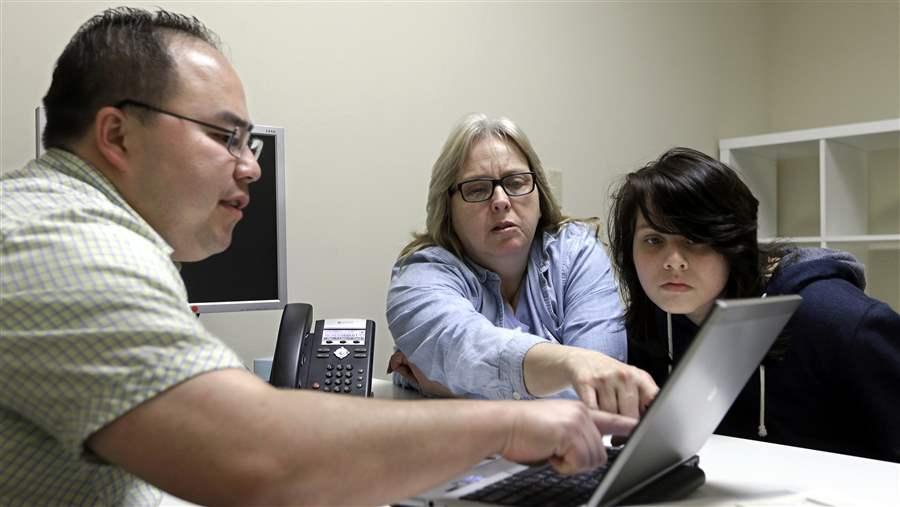 Consumers shop for health insurance on the California exchange. If the Affordable Care Act is repealed, up to 30 million people could lose coverage, a new report says.

If Republicans in Congress carry through with their promise to repeal the Affordable Care Act (ACA) without a replacement, the nearly 30 million newly uninsured Americans would still need and receive medical care.

And a new report from the Urban Institute estimates that the newly uninsured would seek $88 billion in uncompensated medical care in 2019.

Who would pay for it is not at all clear. Judging from a pre-ACA world, the most likely candidates would be hospitals and medical providers, as well as taxpayers — the same entities that traditionally carried most of the burden for uncompensated care before the major provisions of the ACA began taking effect in 2014.

In the 10 years from 2019 to 2028, the Urban Institute estimates that the total cost of uncompensated health care sought by the newly uninsured would be $1.1 trillion.

The report’s authors assume the Republican legislation would adhere to the same goals as the repeal they passed a year ago and which President Barack Obama vetoed. That bill eliminated Medicaid expansion, the mandate that all Americans have health insurance and federal subsidies for insurance policies bought on the health insurance exchanges. The combination of those three actions would result in 29.8 million losing their health insurance, the report estimates.

Because 19 states chose not to expand Medicaid to cover more low-income people, many states, localities and hospitals already have a high burden of uncompensated care. That burden would only increase under the repeal of the ACA, according to the report.

The Urban Institute estimates that the cost of uncompensated care in Texas, which did not expand Medicaid, would rise from $5.8 billion to $11.7 billion in 2019.

The increase would be even more dramatic in states that did expand Medicaid. In California, for example, the cost of uncompensated care would rise from $6 billion to $18.1 billion.

The report notes that uninsured people use less health care than they would if they had insurance. Often they delay seeking care or fail to fill prescriptions because of costs, but eventually many have no choice but to seek treatment.

The report said that care is financed by the uninsured themselves; by the federal government through modest disbursements to hospitals that provide the care; by state and local governments by way of uncompensated care pools and funding to public hospitals, and by free or reduced-price care provided by hospitals, practitioners and drug companies.