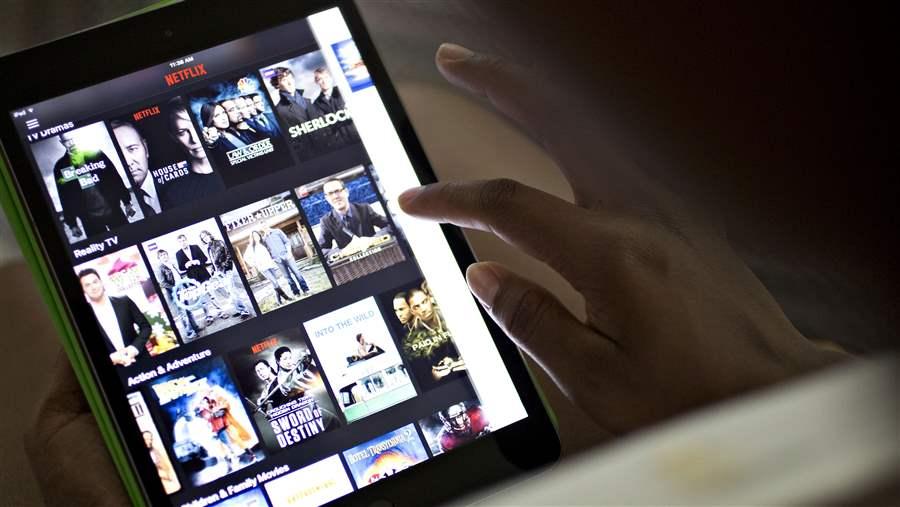 A customer selects videos on a Netflix app. With cities and states facing declining sales tax revenue, some are moving to tax audio and video streaming services, leaving consumers outraged.

A bland, one-paragraph item that appeared this fall in a lightly read weekly newsletter from the city manager in Pasadena, California, has set off a firestorm in the online entertainment industry and in cities and states around the country. The issue: a plan to impose taxes on video streaming services like Hulu and Netflix.

Backers of the internet streaming levy say it’s just another step in governments’ attempts to adapt the tax code to the modern world. Consumers no longer get DVDs at the local Blockbuster Video store, where they paid sales tax. Now, they download movies and shows directly to their devices. Streamers should pay taxes too, the tax advocates argue.

But opponents object to the way some jurisdictions are going about the tax. Officials in Pasadena and other cities that have adopted similar rules, such as Benicia and Indio, California, argue that regulatory rules adopted nearly a decade ago give them the right to extend taxes to streaming services. Foes, led by the streaming industry, say the issue needs to go before the voters, or at the very least, city councils or state legislatures, before taxpayers start handing over more cash.

The move to impose taxes on internet streaming is another step in an effort by cities and states to tax services that are downloaded from far-flung companies that likely don’t have an office or other facility in that state. The so-called “Amazon tax” that some states are seeking to apply to out-of-state internet sales is one example. Taxing “cloud” services with a business-use levy is another. The taxes are akin to taxing electricity that a utility generates out-of-state, but is consumed in-state, or like cellphone taxes on wireless service.

Pennsylvania and the city of Chicago took the lead on what’s known as the Netflix tax, but not without controversy. As part of Chicago’s 2015 “cloud tax,” the city was ready to begin applying a 9 percent tax to digital entertainment. But news reports prompted an uproar and consumers have filed a lawsuit seeking to stop the tax, which has been temporarily suspended.

And in August, as part of Pennsylvania’s effort to address a $1.3 billion budget gap, the state extended its 6 percent sales tax to cover digital downloads, including music, videos, e-books, mobile apps and games.

At least 45 other cities were initially advised that they also could apply utility taxes like those charged for electricity and cable TV to video downloads, including San Bernardino, Glendale, Santa Monica, Culver City and Pico Rivera. The financial firm MuniServices, which helps cities with structuring and collecting utility taxes, worked with the cities on the tax. Their taxes range from 4.5 to 11 percent. Beyond that, streaming video services worry the utility tax extension or a form of entertainment or use tax could spread to other states and municipalities.

Now, according to MuniServices attorney Donald Maynor, the cities are reassessing and talking to the video industry about their products and how to fairly apply the tax.

“The whole idea was to treat everybody the same,” he said. “That way, we can keep our rates down and nobody gets a free ride.”

Joe Henchman, vice president of legal and state projects at the Tax Foundation, a nonpartisan tax research group, says governments are looking at emerging technologies and taking small bites of the tax apple, which stirs up opposition from affected industries or groups. “As new things emerge, very few proposals are structured as ‘Let’s tax all services,’ ” he said. “They are structured as ‘Let’s tax this service.’ That makes it a political thing.”

Despite the opposition, Henchman said, as the economy moves inexorably in the digital direction, the tax structure will follow. “That’s where the money is.”

In September, a memo from Pasadena’s director of finance, Matthew Hawkesworth, attached to the city manager’s newsletter said his office had determined that “all video programming” should be treated the same, “regardless of technology or service supplier.” That meant they would all be subject to a utility users tax of about 9 percent approved by voters in 2008, before streaming video services became so prevalent.

The 2008 referendum said the utility tax would apply to any transmission of “voice, data, audio, video or any other information.” It passed by a 58 to 42 percent margin.

In his memo, Hawkesworth specifically mentioned “Hulu, Netflix, Sling TV and Fullscreen Media.” He said the tax would take effect Jan. 1. Earlier projections estimated it would raise about $10 million a year.

“The notion of extending the 2008 voter-approved [utility users tax] to additional cable-like services is under review,” said city spokesman William Boyer. “There is no timeline for when the issue will be decided.”

Robert Callahan, the Internet Association’s California executive director, objected to using a utility tax to put an assessment on streaming video. “Utility taxes have been applied to water, sewer and cable TV. The idea that we are taxing Netflix and Hulu like water doesn’t make sense,” he said.

Callahan did not dismiss the idea that a modern society might need to change the way taxes are assessed, but said changes in the utility tax are not the way to go. Further, Callahan said that streaming companies would like to participate in any municipal or state discussion over taxation, rather than having administrators simply extend an existing tax to their product with no debate.

David Kline, spokesman for the California Taxpayers Association, an anti-tax group, brought up another problem endemic to taxing pixels rather than hardware: pixels are portable. What happens if you subscribe to Netflix in California, but watch “Orange is the New Black” while on vacation in Hawaii. Which state gets the tax?

“Is the city going to tax all your use of the service when it’s completely out of their jurisdiction?” he said. “That’s almost impossible to audit.”

In 2015, Chicago announced it would extend the city’s 9 percent amusement tax and personal property lease transaction tax, such as that paid on the lease of a car or other equipment, to cover Netflix, Spotify and other streaming services. Like Pasadena, the decision was made administratively, without council action or a vote. The city estimated the extended tax would bring in about $12 million annually to the cash-strapped city.

The nonprofit Liberty Justice Center, a libertarian group that believes in “restraints on government power,” filed a class-action suit against the tax. “It looked to us like the city didn’t have authority to do this, particularly without city council action,” center attorney Jeffrey Schwab said.

The litigation put the brakes on the tax, which was to have taken effect Sept. 1, 2015.

The ruling was issued without comment in a routine list of administrative changes. It said that the city would now charge amusement tax on downloaded music like Spotify or “for the privilege of watching electronically delivered television shows, movies or videos … delivered to a patron in the city.”

A spokesman for the city’s legal department, Bill McCaffrey, said that the city remains “confident that the amusement tax properly applies to streaming video, music and games, and we will continue to defend against the ongoing litigation.”

Recently, the city filed a motion to dismiss the case, but the court rejected it.

Schwab said there’s a difference between the city’s amusement tax, which applies to shows and ball games, and the internet streaming tax. “If you buy a ticket to a Cubs game, you pay a 9 percent tax. But if you buy a ticket to a St. Louis Cardinals game, the city [of Chicago] doesn’t impose a tax on you. However, if you are a Chicago resident and you watch a Netflix movie in St. Louis you are taxed.”

Imagine, Schwab said, if there was a “Netflix of Poland.” Would Chicago impose a tax on residents who wanted to watch films in Polish? “That seems like it goes way beyond the four corners of Chicago.”