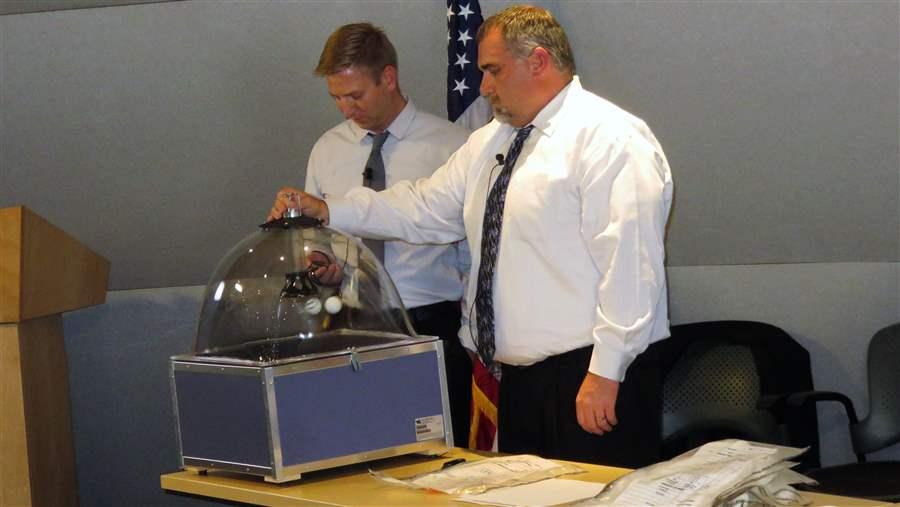 The Arizona Department of Health Services used a lottery system to give out some of its medical marijuana licenses in October. States have struggled with how to devise a system for awarding the licenses that sidesteps controversy.

The seven lucky balls that popped out of the Arizona Department of Health Services lottery machine in October produced big winners — not in the state’s Powerball game, but in the competition to make money in the medical marijuana industry.

The prize winners were granted licenses to open a medical marijuana dispensary in a state where patients with prescriptions to treat conditions such as glaucoma and cancer spent $215 million last year on marijuana products. Arizona’s public health officials awarded most licenses based on rules designed to place new dispensaries within range of the greatest number of medical-marijuana patients. But when it wasn’t clear which applicant was in the most patient-dense area, they used a lottery to randomly select the winners, hoping to sidestep conflict.

States have struggled with how to give out potentially lucrative medical marijuana licenses — trying to balance public health concerns against an entrepreneurial spirit and avoid a bevy of lawsuits. Many want to ensure the businesses are well run and are supplying quality products. But even in states like Arizona where dispensaries are required to be nonprofits, competition for licenses can lead to a gold rush mentality and lawsuits as entrepreneurs eye a medical marijuana industry with $4.2 billion in sales in 2014.

“There’s a lot of cash that goes through these businesses,” said Kris Krane with 4Front Ventures, a medical marijuana consulting firm. “As [marijuana] becomes more legitimate and more legal, it’s only going to be a growth industry. People are looking to get in now because as the industry grows and expands they’re positioned to be market leaders.”

Medical marijuana businesses often have between $1 million and $5 million in sales annually, Krane said, though he’s seen some that do more than $20 million.

Twenty-eight states have medical marijuana programs, but Arizona is rare in that it awards some licenses by a lottery. About a dozen states have strict merit-based systems that award a small set of licenses to businesses viewed as the most qualified. Several have no limit on the number of licenses they give out and review companies through a rolling application process. Others are still developing their programs or have combined the licensing of medical marijuana with that of recreational marijuana businesses.

Those involved in the cannabis industry, including legalization advocates and business consultants, say there’s no perfect system for deciding who gets a license. States that grant them based on applicants’ business proposals produce intense competition and often bring cries of cronyism. Lawsuits pending in Maryland contend the system there unfairly factored in geography as part of its qualifications.

Massachusetts switched from granting a few medical marijuana licenses to granting an unlimited number of licenses in 2015, but found its requirement that applicants get support from local leaders to open an outlet was leading to pricy contracts between businesses and the towns.

Arizona has mostly avoided lawsuits by turning to the lottery to choose between applicants, but critics say infighting often begins among license winners with poorly vetted business plans.

Luck of the Draw

States have encountered many headaches in creating a legal, state-sanctioned business from what was the underground trafficking of a drug the federal government still considers illegal. When Florida first proposed awarding medical marijuana licenses through a lottery, in 2014, the state was sued.

“This ensures only that the luckiest eligible applicant, not best qualified eligible applicant, is approved,” wrote Costa Farms, a nursery that grows marijuana, in its suit against the state. The suit prompted Florida to scrap its lottery and evaluate applications based on their businesses qualifications.

But Arizona figured that using a lottery to dole out licenses was a way to avoid lawsuits, and it has used the system both times it has awarded licenses.

The number of potential patients served by a business location wasn’t a factor when the state began its medical marijuana program, in 2012, and that year more than 90 licenses were awarded by lottery. In both years, the application process has required potential dispensary owners to have basic qualifications, such as showing they can provide inventory tracking and security, but Arizona doesn’t analyze business proposals the way other states do.

“We stress that we’re not doing a merit-based process. We’re doing it by chance,” said Tom Salow, who is in charge of licensing for the state health department, which oversees medical marijuana.

Taylor West with the National Cannabis Industry Association said lotteries have some benefits. They make the decision less subjective and help allay concerns of political influence. But, she said, “The problem with the lottery is it doesn’t always get you your best results.”

The businesses “have to all be meeting minimum requirements, but there’s certainly an argument for trying to get the best,” West said. “A lottery doesn’t reward the really diligent actors who give a lot of thought to the application and have done a lot of planning ahead of time and focused on building the best business possible.”

Ryan Hurley, a lawyer with the Rose Law Group who has represented several marijuana businesses in Arizona, said the lotteries have been successful in largely insulating the state from lawsuits. But, he said, they don’t guarantee that businesses are ready to operate smoothly. He said he’s seen conflict between partners once they get a license.

Many applicants don’t take the time to figure out and document their venture, Hurley said, and questions arise afterward over the investment, the order in which people will get paid, and even who’s in control of decision-making.

“They rush, but then don’t think what will happen if they actually won,” he said. “They’ve got dollar signs in their eyes. Then they get a license and think they’re millionaires and start fighting over who gets what.”

Krane, the industry consultant, said a “qualified lottery” system, such as the one the state of Washington used when it legalized recreational marijuana sales in 2014, lets states screen businesses before choosing the qualified candidates through a lottery. Though more subjective, the qualified lottery gives states a chance to closely review security plans, operational procedures and owners’ backgrounds.

Though many in the marijuana industry, such as West of the Cannabis Association, see a competitive, merit-based application process as a better selection method, trying to evaluate and pick the best businesses brings its own complications.

West said factors that allow states to look at the nuances of applications, such as judging business and security plans, also can expose states to complaints that personal connections have dictated some decisions. States such as Maryland have faced lawsuits challenging the criteria for judging applicants or how they were applied.

Although states typically have tried to make the selections anonymous, West said, it’s not always possible and makes it harder to find the most-qualified applicants. “If part of the judgment is whether you have experienced people on your team, you can’t do that anonymously,” she said. “But it does interject personalities and conflicts and the potential for political influence.”

Maryland tasked Towson University with ranking anonymous applications for growing marijuana on factors such as financing and plans for storing data and providing security. But the system ran into trouble when the state’s medical marijuana commission chose some lower-ranked companies to have better geographic diversity.

Edward Weidenfeld, a partner with Maryland Cultivation and Processing, one of the companies suing the commission, said the state’s system is good in that applications are ranked by a disinterested but knowledgeable third party. But he said the state erred in giving the commission too much power to ignore the rankings. Commissioners, he said, should only step in to ensure the identifying information from an application doesn’t disqualify a business, such as including someone with a criminal record.

How an application is designed can have unintended consequences. In Massachusetts, for example, the state required medical marijuana dispensaries to form as nonprofits and get letters of support from the towns where they were hoping to open. In some cases, the nonprofits, which don’t pay property taxes under state law, agreed to make payments to the towns or turn over a percentage of sales to help cover a town’s costs, such as extra policing.

Those agreements became expensive for some businesses. According to reporting by the Boston Globe, a dispensary in Worcester agreed to pay $450,000 over three years, and another in Salem agreed to pay more than $82,000 the first year. A dispensary in Southborough agreed to pay a portion of its sales and contribute $50,000 annually toward substance abuse and mental health programs.

“Word got out fairly quickly,” among mayors and city councilmen, industry consultant Krane said. “They all started trying to outdo each other in terms of how much they could get in hosting agreements. It’s where some people have been crying extortion.”

Massachusetts voters also recently approved recreational marijuana in a ballot measure that many elected officials said was flawed. A new commission created by the measure is directed to give licenses to companies with “the most experience operating medical marijuana treatment centers and then by lottery among qualified applicants.”

The number of licenses states choose to award can change the way businesses pursue them.

States that don’t limit their licenses may give out hundreds of them to businesses the state views as qualified. Krane said these states regulate marijuana more like a pharmacy, making sure applicants meet strict standards before they are allowed to open. Colorado has given medical marijuana licenses to more than 500 centers and nearly 800 growers, which are licensed separately from those in the recreational market. States with a cap on licenses often give out fewer than 10 in a highly competitive process.

“It creates these incentives for organizations to spend more time drumming up capital and political influence so that they can corner these licenses that give them this huge market share, rather than developing the best business or best model for taking care of patients,” West of the Cannabis Association said. “In other states, it’s a little less clear that any one license is a golden ticket worth bending the rules to get.”

Costa Farms, the company that sued over Florida’s plan for a lottery, later became one of the companies on a panel designed to help write Florida’s medical marijuana regulations. According to the Miami Herald, a last-minute addition to a House bill requiring that licensees be in business since 1984 — the earliest year Costa Farms has documentation of being a registered nursery — would have made it difficult for other companies to get a license. Pedro Freyre with Costa Farms said the company did not lobby for the provision.

Industry advocates say the most important thing is just having enough licenses that patients don’t have to travel far to get the medicine they need.

Florida initially planned to have five licenses, though more are being added as nurseries sue the state. Krane said just a few licenses for a state can make sense when prescriptions are limited to noneuphoric marijuana for a small set of diseases, as is the case there.

“Policymakers’ approach has been, ‘We don’t want recreational by another name,’ which is what has happened in other states with sort of a wink, wink, nudge, nudge,” he said.