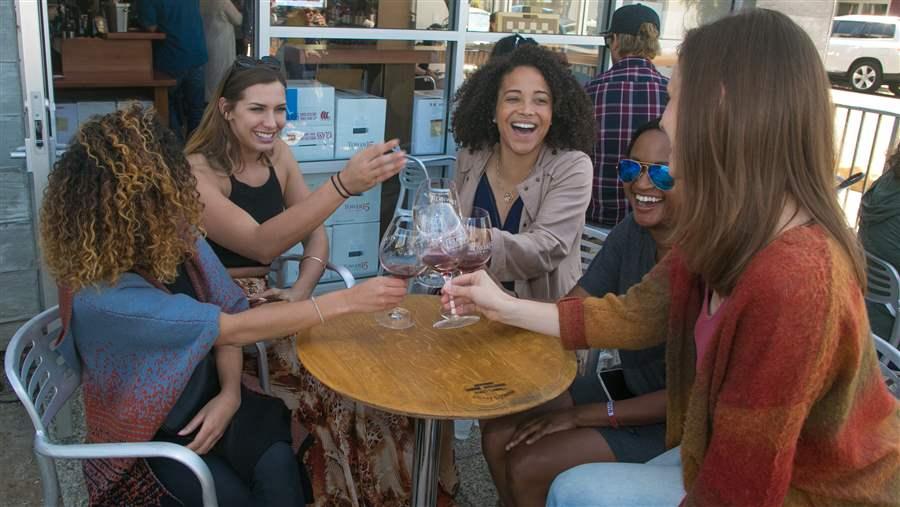 A group of women enjoy wine tasting in Santa Barbara, California. Nationwide, women are drinking more than they did a decade ago. Some states are working to raise awareness of the negative health effects that alcohol can have on women.

As the holidays approach, state and local governments are gearing up for a predictable surge in drunken driving and emergency room visits related to binge drinking.

Little has changed when it comes to America’s alcohol problem, with one exception: substantially more women are drinking compared to a decade ago, and a higher percentage of them are binge drinking.

Because women are more vulnerable to the damaging health effects of alcohol than men, and because drinking during pregnancy can have devastating effects on a fetus, the federal government and some states have made the growing trend a top public health priority.

According to Dr. George Koob, director of the National Institute on Alcohol Abuse and Alcoholism, “the harms associated with alcohol use in women escalate more quickly, affecting women at an earlier age than men, and the damage tends to be more severe.”

For decades, states have attempted to suppress drinking among men and women of all ages by levying alcohol excise taxes, regulating the number of restaurants and bars that sell alcohol, holding retailers accountable for harms resulting from selling alcohol to minors, and placing limits on the days and hours alcohol can be sold — with some success.

But a number of states are redoubling efforts to educate women and their health care providers about the widely misunderstood risks of what many people consider harmless levels of drinking.

The Delaware public health department, for example, has developed a questionnaire to help young women discuss their alcohol use with their health care providers, as well as resources that can help physicians screen patients for potential alcohol abuse. North Carolina has developed specialized alcohol screening programs for pregnant women under the state’s community health program.

And in Colorado, where a statewide substance abuse screening and prevention program has collected data on more than 50,000 residents, a tailored approach has been developed to help health care providers address the personal and often touchy issues of alcohol use and family planning.

Even for women who do not become addicted to alcohol, having more than seven alcoholic drinks in a week puts them at higher risk for heart disease, stroke and liver disease. The recommended maximum level for men is twice that amount.

Alcohol is a carcinogen, meaning it increases the risk to both men and women of a variety of cancers, including cancers of the colon, liver, esophagus, throat and mouth. Many medical professionals insist that any alcohol consumption can be harmful, an unwelcome message for many who enjoy an occasional drink.

Women who have even one drink a day have a 10 percent higher risk of developing breast cancer than women who do not drink, and the risk rises another 10 percent for every extra drink they have a day, according to 2009 research from the University of Oxford. 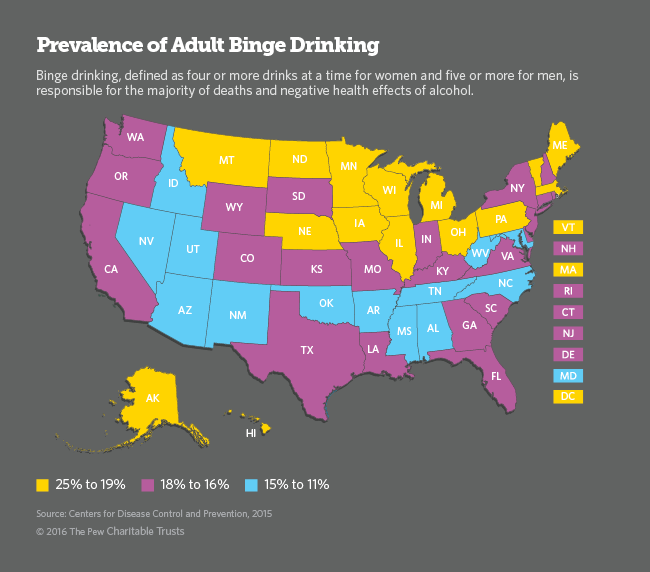 Year after year, alcohol kills 88,000 Americans when accidents and diseases are combined. And the annual cost to the nation, including health care, death, incarcerations and lost productivity, is roughly $250 billion.

“It’s the elephant in the room when we talk about substance abuse,” Koob said. “Nobody wants to talk about it because we’ve made so little progress in reducing it over the years.”

In the last decade and a half, the share of women in the U.S. who drink alcohol has increased at least 22 percent, while the percentage of adult men who drink has remained about the same, according to the National Institute on Alcohol Abuse and Alcoholism.

Despite the rise in drinking rates among women, men are still more likely to be drinkers than women. Seventy-seven percent of all men drink compared to 69 percent of women. And men tend to drink about twice as much as women.

Most worrying is an increase in the frequency and intensity of binge drinking among women and girls, said Dr. Bob Brewer, who heads the Centers for Disease Control and Prevention’s alcohol division.

One in eight women now report binge drinking. The typical female binge drinker usually binges three times a month and usually has six drinks when she does.

Theories differ on why American women are drinking more today than in the past. A study published in October by researchers from Columbia University and the University of New South Wales in Australia indicates a similar trend is occurring worldwide.

Unlike other unhealthy behaviors, such as obesity and smoking, excessive drinking among both women and men is more prevalent in populations with incomes of $75,000 or more.

“The story there is that we haven’t given as much attention as a society to reducing drinking, particularly binge drinking, as we have to other health risks,” Brewer said. “We need to do a better job.”

Dr. Corey Waller, an addiction specialist who treats pregnant women at the Camden Coalition in New Jersey, suggests that drinking among women started to become more accepted in American society as more women began to attend college and move into high-level careers.

“As females became uplifted in education and business, we began to see a normalization of the same bad habits that used to be male-dominated,” Waller said. For example, women now account for 55 percent of all college students, a group with high rates of binge drinking.

As in most states, Delaware’s alcohol abuse prevention has focused on women of childbearing age. Alcohol use during pregnancy is the No. 1 preventable cause of birth defects. It can lead to sudden infant death syndrome or fetal alcohol spectrum disorder, which is caused by irreversible neurological damage to the fetus.

The disorder affects as many as one in 20 schoolchildren, according to the U.S. Centers for Disease Control and Prevention.

But Delaware also is working with primary care doctors, obstetricians and gynecologists to increase the frequency of screening for alcohol use among all women. Research has shown that even asking the question, “Do you drink?” during a physical exam can have positive effects on a patient’s health, said Dr. Karyl Rattay, Delaware’s director of public health.

Nationwide, only one in six people report that their doctors have asked them about drinking, and the rate is even lower for women. Experts say this is primarily because physicians tend to rule out excessive drinking as an issue for women.

There is also some confusion, even among doctors, about the potential health benefits of alcohol, Rattay said. Some studies have shown that moderate drinking may be good for the heart and circulatory system, and may protect against type 2 diabetes and gallstones.

But it’s not clear that there is a great advantage to drinking a serving of alcohol every day, she said. “There’s much more evidence that there is harm with drinking. I don’t think that if a doctor suggests someone not drink, they’re putting their patient’s cardiovascular health at risk,” she said.

In February, the CDC called on the medical community to “discuss and recommend, as appropriate, available contraception methods to women who are sexually active and drink alcohol.”

According to the federal agency’s alert, approximately 3.3 million U.S. women aged 15 to 44 who were not pregnant and not sterile were at risk for an alcohol-exposed pregnancy between 2011 and 2013.

The CDC’s bluntly worded message got a mixed reception from women nationally. In general, women objected to what they perceived as being told when they can drink and when they need birth control, said Carolyn Swenson, manager of Colorado’s substance abuse screening program.

Alcohol consumption and the use of contraception are issues that most women consider personal choices, Swenson said, making it difficult for medical professionals to simply tell them what they should do.

She said Colorado has developed a quick and easy reference to help health care professionals screen women for alcohol use. But, she said, “We’re still working on the messaging.”