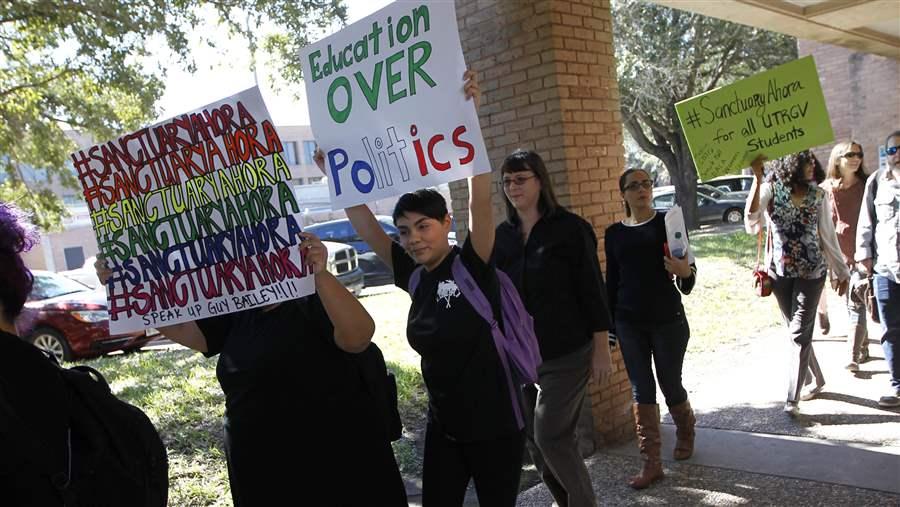 Students and faculty at the University of Texas-Rio Grande Valley march to the university president’s office to ask that the campus be declared a sanctuary. The “sanctuary campus” movement has become contentious, although colleges aren’t preparing to take steps that are against the law.

College students across the country are clamoring for their campuses to be declared “sanctuaries,” where administrators do all they can to protect students and employees from any effort by Republican President-elect Donald Trump to deport unauthorized immigrants or register Muslims.

In response, Texas Republican Gov. Greg Abbott and Republican legislators in Arkansas, Georgia and Texas are threatening to cut off funding to any colleges or universities that establish themselves as so-called sanctuary campuses.

But the protests and proposed retaliation are disconnected from current immigration and student privacy laws, legal analysts say, and from what the Trump administration might do any time soon.

There’s no consensus on what it means to be a sanctuary campus. And the word “sanctuary” inflates the relatively minor demands that activists are asking of college administrators.

“The term sanctuary, to me, implies a place where nobody can get you. And I don’t think anybody can promise that,” said Dan Berger, a Massachusetts immigration lawyer who advises colleges.

College campuses have never been raided by federal immigration officials and there’s no indication that they will be, said Michael A. Olivas, acting president of the University of Houston-Downtown in Texas and an expert in higher education and immigration law.

Even if colleges were targeted by the Trump administration, much legal sand could be thrown into the gears before administrators would be enlisted in identifying students for deportation. “I urge everyone … to have some perspective on this,” Olivas said.

The Movement and Its Demands

Trump’s election left many college students feeling scared, sad and angry, particularly students from minority groups who thought they were targeted by the president-elect’s campaign statements.

“We want universities to do everything they can do, legally, in order to protect students,” said Vera Parra, an organizer for Cosecha. The group also wants colleges to protect their employees.

Parra said the protests and petitions are intended to rally people against deportation efforts and prepare colleges for a potential rollback of Obama administration directives that make college campuses — and so-called DREAMers, people brought to the U.S. illegally as children — a low priority for immigration enforcement actions.

Every campus petition is different, but many have been shaped by Cosecha’s suggested demands. The group has seven, only one of which would put colleges at risk of breaking the law.

For instance, Cosecha suggests colleges refuse to share information with immigration officials “to the fullest extent possible by the law.” Federal privacy law already bars colleges from handing over most private student data without the student’s consent, a subpoena or a court order. In any case, institutions don’t usually track which students are undocumented.

The only suggestion from Cosecha that would step outside current law asks colleges to not use the federal e-verify system to screen employees. Some states require colleges or all employers to use the system to determine whether employees are unauthorized immigrants. Berger said e-verify is required for federal grants and can benefit international students, so most universities use it.

Josue Reynoza, 19, helped write the sanctuary petition delivered to administrators at Texas State University in San Marcos. It combined Cosecha ideas with others, such as a request for a research committee on vulnerable campus populations and better policies to denounce hate speech.

Reynoza said that when he heard about the sanctuary campus movement he was eager to get involved. “I have undocumented friends, and I’m also Hispanic,” he said. “It affects many people, and it also affects my friends.”

Although the sanctuary campus movement is based on small policy tweaks, the term “sanctuary” is politically and emotionally explosive. For advocates, it suggests a compassionate response to injustice. For critics, it indicates a willingness to defy the law to shelter unauthorized immigrants or potential terrorists.

College administrators, wary from the beginning of using a vague word like sanctuary, find themselves in the position of insisting their campuses are not sanctuaries while adopting some of the steps activists call for.

University of Connecticut President Susan Herbst said this month that, while the university can’t legally call itself a “sanctuary,” it’s taking steps associated with the sanctuary movement, such as forbidding campus police to make arrests even if asked to by federal immigration officials.

Texas State President Denise Trauth has repeatedly said that she will not declare the institution to be a sanctuary campus, but Reynoza said he and his fellow activists have been told the university is implementing most of the steps their petition demanded.

Reynoza said his group is trying to step away from using the word sanctuary, to get away from the negative connotation it has for some people.

Nobody knows whether or how Trump will act on his campaign promises. In a recent interview with Time magazine, he backtracked on his pledge to roll back President Barack Obama’s temporary work permits for people brought to the U.S. illegally as children.

“We’re going to work something out that’s going to make people happy and proud,” Trump said.

Olivas has written that it’s not possible — or necessary — to create a legal cocoon for students.

Until the incoming administration makes clear what policy changes it will make, Berger advises colleges and universities to help concerned students get access to good legal advice and only authorize certain administrators — such as the school’s general counsel — to talk to federal law enforcement.

After 9/11, many colleges had a policy of sending certain point people to work with federal officials who wanted to interview students from Muslim countries.

“This is not obstructionism,” Berger said. “This is just the fact that administrative warrants, judicial warrants, federal student records, privacy — these are all very complicated issues.”­­­­