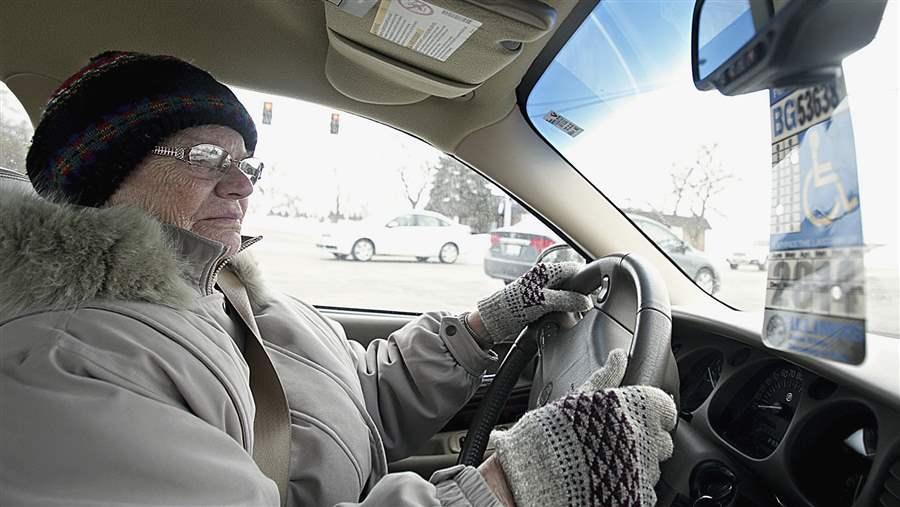 By 2030, more than 60 million older adults could be driving on the nation’s roadways. But don’t expect many more states to put added restrictions on their ability to get behind the wheel.

Legislatures have become increasingly reluctant to restrict driver’s licenses for seniors or impose extra requirements — such as vision or road tests — for getting them renewed based solely on their advancing age.

That’s partly because older people are generally considered safe drivers, more programs exist to improve their driving skills, and recent studies have shown that many of the restrictions aren’t as effective as once thought in preventing traffic fatalities. It’s also because a politically powerful group of advocates for seniors and motorists, such as AARP and AAA, argue that age shouldn’t be used as the sole measure of an older person’s fitness to handle a car.

“We believe that driving is about the ability and health of the driver, not their age,” said AARP spokeswoman Kristin S. Palmer. “We can’t stereotype older drivers.”

Jonathan Adkins, executive director of the Governors Highway Safety Association, which represents highway safety offices, said another reason many legislatures have not passed age-based restrictions lately is that society has changed the way it defines “old.” Being 75 isn’t what it used to be, because people are more active and live longer than previous generations.

“We just elected the oldest president ever,” Adkins said, referring to Republican President-elect Donald Trump, who is 70.

In recent years, efforts to impose restrictions often failed. Legislatures in more than a dozen states considered legislation affecting older drivers in the last two years, but only a handful of bills passed, none of them controversial.

And some enabled more people to get licenses or gave them breaks based on their age. For instance, a measure in South Carolina allows people with certain vision problems to get or renew a license if they use a special device on their glasses. One in New Mexico lowered the eligibility age to 50 for drivers to qualify for reduced insurance rates if they take a driver’s education course.

But the fact remains as people age, their vision, hearing and reflexes often deteriorate. And states are faced with trying to balance ensuring the safety of older drivers and others on the road with not discriminating against people just because they are getting older.

“Age should not be the issue. It should be your ability to handle the car and drive safely,” said Jurek Grabowski, research director for the AAA Foundation for Traffic Safety, a nonprofit research and education group.

The nation’s senior population is projected to explode as 75 million baby boomers grow old. And traffic safety experts expect the number of at-risk drivers will also grow, as all indications are aging boomers who grew up behind the wheel want to continue to drive.

In the early 1970s, barely half of Americans 65 and older held a driver’s license. Nowadays, 84 percent do. By many measures, they have a good driving safety record.

Seniors typically follow the rules and wear seat belts, observe the speed limit, and don’t drink and drive, auto safety analysts say. Their crash rates have continued to drop over the years. And they are less likely than previous generations of seniors to be in a crash or to be killed or seriously injured in a crash because they’re generally healthier and cars are safer.

But older drivers are at higher risk of crashing than middle-aged people because of declining vision, hearing and cognitive ability and medical conditions that could affect their driving. When they are involved in a crash, they are more likely to be injured or killed than drivers in other age groups.

“Usually, if someone dies, it’s the older driver or their passengers, who tend to be older,” said Jessica Cicchino, a vice president at the Insurance Institute for Highway Safety, a nonprofit research group funded by auto insurance companies.

Older drivers also are more likely than younger ones to be involved in certain types of collisions, such as crashes at intersections or those caused by failing to yield, according to the Insurance Institute.

States vary considerably in what they require of older drivers to renew a license.

Nineteen have shorter renewal periods for drivers over a certain age, according to the Insurance Institute. Eighteen demand more frequent vision screening. And 15 states that allow drivers to renew by mail or online don’t offer that option to older drivers.

Illinois has one of the strictest renewal requirements of any state. Drivers 75 and older must take a road test to renew their license. It’s the type of law that AAA opposes.

“Many states have bills introduced seeking that. We spend a lot of time combating it,” said Jake Nelson, AAA’s traffic safety director. “It’s bad policy and it doesn’t enhance safety at all.”

Only two have been shown to reduce fatal crashes: making drivers 85 and over renew in person and requiring people in that age group to take a vision test in states that don’t make them renew in person, said Cicchino of the Insurance Institute. Fatality rates for drivers 55 and older are no lower in states that mandate road or written tests or shortened renewal periods for older drivers, she said.

Some states, such as Alabama and Kentucky, impose no age-based requirements on older drivers. Others actually give them a break. Oklahoma, for example, reduces the license fee for drivers age 62 to 64 and waives it entirely for those 65 and older.

Some groups that oppose putting restrictions on older drivers based solely on their age endorse broader policies aimed at improving safety on the roads. AAA, for example, thinks all drivers should take a vision test when they renew, either at a DMV or at a doctor’s office. And it views the renewal process as a good way for DMV staffers to observe drivers to see whether they may have physical or mental impairments that could affect their driving ability.

For seniors who might be a danger on the roads because of certain physical or mental conditions, both AAA and AARP support the concept of medical advisory boards that set standards for state licensing agencies and assess at-risk drivers’ ability to get behind the wheel. At least 38 states have set up some kind of advisory board.

“If you come to our attention and you should not be on the road, we have a process to get you off the road very fast,” said Dr. Carl Soderstrom, the chief of Maryland’s Medical Advisory Board. “The fact that we have taken the licenses away from thousands of very unsafe people over the years says the program is working.”

A Matter of Independence

Driving is an important way for older adults to remain independent and mobile, experts on aging say. Without a car, they can grow isolated and depressed, and their physical and mental health can deteriorate.

Instead of driving themselves, some may turn to taxis or ride-hailing companies such as Uber and Lyft, or eventually, self-driving cars. Others may rely on volunteer driver programs or public transit.

“We want to get away from the idea of taking away mom and dad’s keys and focus on other alternatives to keep them mobile,” said Adkins, of the governors’ highway safety group. “But you also don’t want to take away their mobility and independence if they could be driving safely.”

AAA and AARP have created driver refresher classes for older adults to help them stay safe on the roads.

AARP’s “Smart Driver Course,” offered in classrooms or online, teaches strategies for reducing the likelihood of a crash and making adjustments to compensate for the effects aging may have on driving. The group runs about 30,000 courses a year and trains about half a million drivers, said Palmer, the group’s spokeswoman.

At least 34 states plus Washington, D.C., have passed laws allowing auto insurance companies to provide a premium discount to seniors who complete a state-approved driver safety course in a classroom.

A number of advanced technologies, such as collision warning systems and rearview cameras, also can help seniors drive safely for a longer period of time, a 2015 AAA Foundation report found.

But all the bells and whistles on new cars can be a distraction for some older drivers.

That’s why auto safety groups also recommend that transportation agencies take action on their own, by making letters on road signs larger, making pavement markings more visible, and adding left-turn lanes and signals at intersections. Another possibility: reconfiguring intersections as roundabouts, which reduce speeds and eliminate the complexities of turning at intersections.

“These are simple fixes to the roadways that states actually can make that can prevent older drivers’ deadliest crashes,” said the Insurance Institute’s Cicchino.