Military Spouses Struggle to Stay in Careers, Despite State Laws 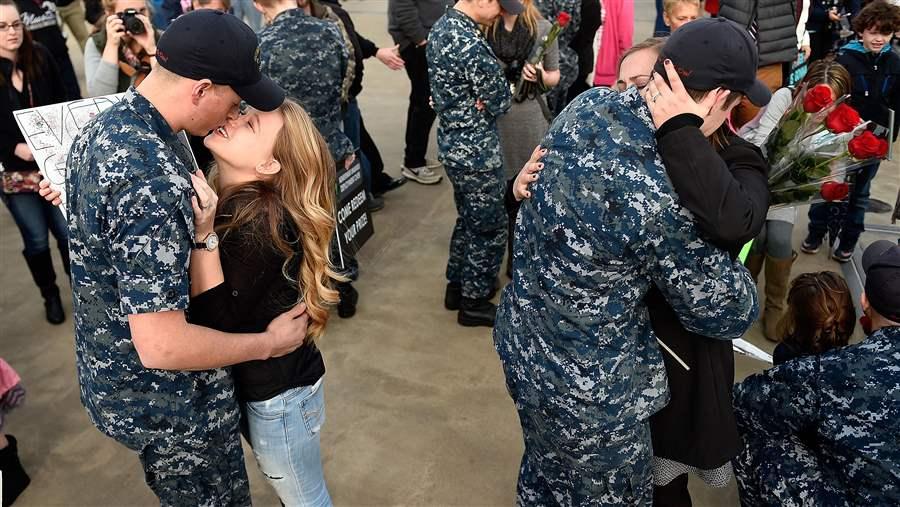 Military families reunited last month at a Navy submarine base in Groton, Connecticut, following a deployment. Laws recently passed in all states were aimed at making it easier for military spouses to stay in their career as their families move from state to state.

Patti Ruby is a rarity among military spouses. She has been able to stay in her chosen career, speech pathology, for nearly 13 years, through the birth of her three children and a cross-country move, from Virginia to California. Last week, the family moved again, to Florida.

Ruby said she thought a new Florida law that provides temporary occupational licenses to military spouses would make it easy for her to get back to work. But she realized last month that she may not be eligible. Soon, she may be among the 23 percent of military spouses who are unemployed.

Military spouses report having problems. About one-third work in licensed or certified professions, and about 63 percent of them said they encountered difficulties this year with licensing because of a move, according to survey results released Thursday from Blue Star Families, a national nonprofit aimed at helping military families. That’s down 7 percentage points from 2014, when the organization first asked the question.

The laws were driven by a White House campaign aimed at decreasing the unemployment rate for military spouses — 92 percent of whom are women — as it is significantly higher than the unemployment rate for all women over the age of 20, which is 4.2 percent. The high rate largely is a result of how often military families move, said Eddy Mentzer, a program manager for spouse education and career opportunities at the U.S. Department of Defense. They move once every two to three years, which is more than twice as often as the average family, according to a 2016 paper by the Institute for Veterans and Military Families at Syracuse University.

The high unemployment rate takes a toll on the economy, according to advocates for military families. Difficult working conditions for military spouses lead to a social cost ranging from $710 million to $1 billion a year, according to an April report from Blue Star Families.

It’s also a national security issue, Mentzer said. Keeping spouses satisfied with their careers helps with military retention and recruitment, he said. Military spouses are 36 percent more likely to recommend military service to others if they are able to maintain a career, according to Blue Star’s survey.

If working conditions for spouses don’t improve, families will be more likely to leave the military and it will be hard to recruit new members, said Cristin Orr Shiffer, senior adviser for policy and survey with Blue Star Families.

In 29 states, the law provides for three allowances supported by the Pentagon — recognizing out-of-state licenses, issuing temporary licenses and expediting licensing. But even in those states, the laws only include spouses in certain circumstances and certain professions, and the state may not be required to provide the allowances. And in many cases, spouses don’t know the laws exist.

There still is a long way to go, Mentzer said. “This is not a challenge that will go away for military spouses,” he said.

In Florida, Ruby, whose husband is in the Navy, said she thought the law, which allows the state to issue temporary licenses to military spouses with a current license in another state, would help her. But the law only applies to spouses who were active in their field for the last three years. And when Ruby’s family moved to California two-and-a-half years ago, she took a year off to care for her small children while her husband was deployed overseas.

She said the exception in the Florida law makes it so very few military families will qualify, because moving so often inevitably leads to gaps in employment. “You’re trying to help me out, but you’re also putting a clause on that’s a little unrealistic,” she said.

Jill Qualters, a friend of Ruby’s whose husband is also in the Navy, has moved across state lines six times in the last 13 years, the last time about a month ago to Colorado. She said that although she has stayed home with her children the last seven years, she wanted to get back into her career as a school counselor once the family got to Colorado.

To do so, she had to move a few weeks ahead of her family to take a test that would allow her to get her license. The test is offered only twice a year, and if she missed the November test, the next one wouldn’t have been until May.

Qualters said it was hard to not only take the test in the midst of the move, but to navigate the system.

“People who may not have the skills I do may just be throwing their hands up,” she said. “It just gets really frustrating. And that worries me because two-income families are the norm now.”

The constant moves don’t just make it hard to stay employed, but also to get promotions and pay raises. The average income of a military spouse married to someone in active duty was $23,132, compared to $31,393 for a military spouse married to someone not in active duty, according to a 2014 report by the Institute for Veterans and Military Families at Syracuse University.

Over the course of a 20- to 30-year career there is so much lost income, and that can be demoralizing, said Michael Richter, an attorney in New York and chairman of the New York City Bar Association’s Military Affairs and Justice Committee, which advocated for a law in the state.

“These folks have made a significant sacrifice,” Richter said. “We don’t really need to add to their burden.”

In September, New York became the 50th state to pass a law to help spouses get a professional license when they move, a milestone celebrated by the White House. The bill should have been approved quickly, Richter said, as it was a bipartisan issue and wouldn’t cost the state any money. Instead, it was stuck for years in the Assembly Higher Education Committee.

There was hesitance in the Legislature about giving spouses a waiver because New York doesn’t typically grant exceptions for licenses, said Democratic state Assemblyman Félix Ortiz, who sponsored the bill.

With so many military spouses being well-educated, the legislation will help military families by allowing them to take better jobs and make more than just minimum wage, said Ortiz, who served in the Army.

Some companies make it a mission to hire military spouses because of what they bring to the job, said Andrew Schwartz, program manager of Virginia Values Veterans, a state program that encourages companies to commit to hiring veterans and spouses.

One Virginia company, Liberty Source PBC, has a social mission of hiring veterans and military spouses and training them for future work. More than 70 percent of employees at the company, which provides operating services, such as office support, financial services and accounting, to other companies, are veterans or military spouses, said Ashley Dolor, military spouse ambassador for the company.

Military spouses make for great employees, Dolor said, as they are used to adapting to new situations, which makes them agile to demands in the workplace.

“It’s in their blood,” said Dolor, whose husband is in the military. “That’s the way they live their lives on a constant basis.”

The Department of Defense recently contracted with the University of Minnesota to evaluate states’ implementation of the new laws to see where gaps exist. The study is expected to be done next year.

The Pentagon also is encouraging states to pass new laws, including ones specific to occupations such as teaching and nursing that aren’t covered by most existing laws.

Despite the efforts, some military families will still choose to leave the military because of the effect moves can have on a spouse’s career. Johanna Thibault’s husband just left active duty Army service primarily so the family didn’t have to move so often. “He didn’t want to watch the stress on my career anymore,” she said.

Thibault, a lawyer, is the communications director for the Military Spouse JD Network, which has since 2011 been advocating for state laws that allow reciprocity of law licenses between states. So far, 22 states have passed the laws.

Being a lawyer and having a spouse in the military is particularly hard, Thibault said, because of the time and cost of sitting for the bar exam, which can cost a few thousand dollars in each state.

“Once you pass, it’s painful to walk away from it,” she said.

It’s not uncommon for military spouses who are lawyers to live separately from their husband or wife just to maintain their career, Thibault said. A state can change that by passing a law, she said.