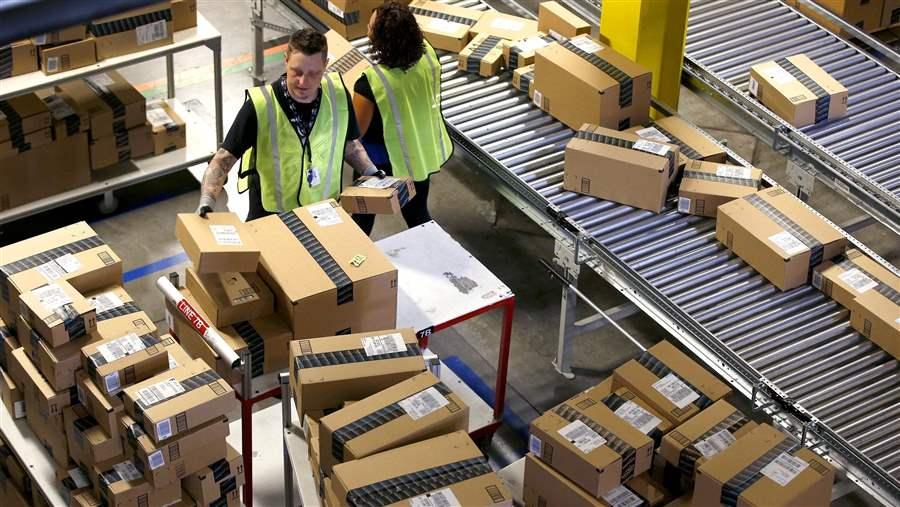 Amazon.com employees organize outbound packages at an Amazon.com Fulfillment Center on "Cyber Monday" the busiest online shopping day of the holiday season, in Phoenix. States are encouraged by a Supreme Court action that they hope will open the door to states collecting billions in sales taxes on online purchases.

Advocates for internet sales taxes, including the National Governors Association, are hailing a Supreme Court decision that they hope will set a precedent for states seeking to collect sales taxes from online retailers.

The high court decided to leave in place a Colorado law designed to make it easier to collect an “Amazon tax” on out-of-state internet purchases. In addition to states seeking additional revenue, estimated by the NGA at $23 billion annually, brick-and-mortar retailers argue that not charging sales taxes on internet purchases puts them at a disadvantage.

The NGA has battled on many fronts, including the states and Congress, for years, seeking what they call parity in sales taxes. Congress has failed to act. Amazon, the nation’s largest online seller, has voluntarily started collecting some sales taxes, but other sellers haven’t.

“NGA believes this course of action is a positive outcome,” said Elena Waskey, spokeswoman for the NGA. “The court’s decision upholds the Colorado law and the authority of states to require additional reporting from out-of-state sellers. Other cases are making their way through the system that will directly address the issue of states’ authority to require out-of-state sellers to collect sales taxes.”

The 2010 Colorado law was aimed at encouraging state residents to pay the 2.9 percent sales tax on purchases they make out-of-state, including from online retailers, by requiring the companies to notify consumers that they must pay the tax. The internet retailers’ group, Direct Marketing Association, opposed the law.

Broader state laws that would directly require payment of state sales taxes have stalled in Congress but are making their way through the court system. Some states have simply imposed the taxes as the suits are pending.

Colorado estimated that non-collection of sales taxes on online purchases cost the state more than $170 million in 2012.