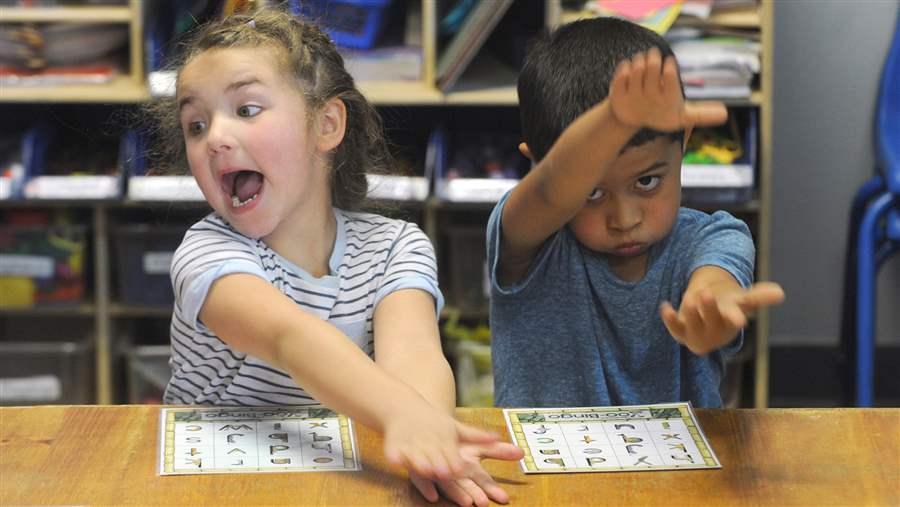 Children play a phonics game at Kids Korner Preschool and Daycare in Idaho Falls, Idaho. Fewer children are served by publicly subsidized child care programs today than a decade ago.

Before she heads to her shift at a nursing home in New Haven, Connecticut, every morning, nursing assistant Elisha LaRose drops her 4-year-old son off at a day care center. She’s grateful he’ll be in a safe, educational environment all day.

LaRose, 30, is a single mother and could never afford to send her son to day care without a child care subsidy. The subsidy, a mix of federal and state money (combined with a separate Connecticut program), cuts her weekly day care costs to $48. Without the help, she said, she’d probably have to leave her son with an unlicensed baby sitter.

In many states, subsidies may be about to get scarcer. States are starting to implement a 2014 federal law that requires them to do more to ensure that children who receive subsidies have a safe, educational experience. The law also includes eligibility changes that will allow many families to keep receiving subsidy assistance for longer.

Child care advocates support the higher standards, but worry that they’ll prove costly and will push some states to serve fewer families. That could have far-reaching results for employers, as well as parents.

“We often say that parents are one unstable child-care arrangement away from losing their jobs,” said Helen Blank, director of child care and early learning at the National Women’s Law Center. Child care challenges can cause parents to show up late to work or not show up at all. This hurts both families and employers, who increasingly say they can’t find workers to fill their low-pay, low-skill positions.

Some states are already helping fewer children, Blank said, primarily because federal funding has fallen. In 2014, the number of children receiving subsidies fell to its lowest level since 1998.

Both major party presidential candidates talked about rising child care costs and put forward plans to help working families afford it. “For many families in our country, child care is now the single largest expense — even more than housing,” President-elect Donald Trump said in a speech.

A year’s child care for a Connecticut toddler can range from $7,000 to $20,000, according to the Connecticut United Way. That comprises between 23 and 62 percent of the average income for a nursing assistant in the state.

In addition to proposing guaranteed paid maternity leave, Trump has a child care plan based on tax breaks: a tax break for all mothers, an optional tax rebate for low-income mothers and flexible savings accounts.

His plan would largely benefit wealthy and stay-at-home parents, according to the Urban-Brookings Tax Policy Center, a nonpartisan Washington, D.C., think tank.

A Chronic Problem for Working Parents

Congress expanded child care subsidies in the 1990s as part of welfare reform to help low-income parents stay in the workforce.

Today, about 1.4 million children, mostly age 6 and younger, benefit from child care subsidies funded by the federal government and states. Recipients can use the subsidies to defray the cost of care in the child’s home, another family’s home, a group home or a center. States typically ask parents to pay a portion of the cost of care.

But the program only reaches one in six children who are eligible under federal law, the U.S. Department of Health and Human Services found in 2011. Lack of funding is one reason why. Another is almost every state restricts the program to its poorest families.

Seventeen states currently limit enrollment to families earning below 150 percent of the federal poverty level, which is about $30,000 for a family of three, according to Blank of the National Women’s Law Center. Twenty states currently have waiting lists or are turning families away.

And families tend not to receive subsidies for long. The average family loses the benefit after about six or seven months. Sometimes families stop receiving subsidies because they no longer need help paying for child care. Other times families fall off the rolls because of a lost job or incomplete paperwork.

Workforce development officials say that losing the benefit can upend a fragile family’s finances. Take a $400 monthly subsidy away from a single mom who earns $12 an hour, and she can suddenly find herself spending over half her income on day care, said Clyde McQueen, president and CEO of the Full Employment Council in Kansas City, Missouri.

“Something has to give,” McQueen said. It could be rent, child care or gasoline money. If any of those things falls through, the mother could end up losing her job — and the family could end up back in the kind of crisis that led them to seek help the first place.

Child care problems go beyond affording day care, McQueen said, and affect low-income parents who aren’t poor enough to qualify for a subsidy. It can be hard for some parents to take time off, or leave work early, to care for a sick child. Others may find they can’t work night shifts because there isn’t another adult at home who can watch their kids overnight.

“We have to do a much better job explaining to companies the implications of this,” he said.

A Push for Quality

Over the past decade or so, states have made changes to improve the quality of subsidized child care programs. Most states have created standards for centers and home-based providers, and pushed them to deliver a safer and more educational experience.

Some states have tried to make life easier for parents, as well. Colorado, Washington and Connecticut are among states that allow families to stay eligible for subsidies for 12 months once they submit their initial paperwork, so long as their income doesn’t rise above a federal threshold.

Under the 2014 version of the Child Care and Development Block Grant Act, all states will have to make quality and eligibility changes. For instance, the law requires all states to keep families eligible for subsidies for 12 months, process background checks for care providers, and set standard ratios of children to providers.

Advocates, while cheering the changes, say that the new law comes with a catch. The federal government didn’t authorize extra funds to help states meet its new requirements. So either states will have to increase their spending or they’ll have to shrink the size of their programs.

There’s an inherent tension in improving how child care subsidies work for parents and children, said Bill Jaeger, vice president of early childhood initiatives at the Colorado Children’s Campaign, an advocacy group. “Every dollar you spend on a quality initiative is a dollar you’re not spending on serving another family,” he said.

Connecticut’s situation is a cautionary tale. In anticipation of the federal changes, the state in 2014 began allowing families to remain eligible for assistance for 12 months. State agencies underestimated how much the change would cost.

Last week, the state announced that it will stop accepting new applications at the end of the month from all but families receiving cash assistance. Parents who already get subsidies, such as LaRose, won’t be affected. There are now over 2,000 families on the state’s waiting list for subsidies, said Merrill Gay, executive director of the Connecticut Early Childhood Alliance.

More stringent quality requirements may already be making it harder for more informal child care businesses, such as home-based centers, to stay in business. Those centers typically have more flexible hours than day care centers.

“There’s a mismatch between the direction the child care subsidy system is going and the working reality of low-income parents,” said Gina Adams of the Urban Institute.

Low-income families are spending about as much on child care today as they were in the early 1990s, which suggests that child care subsidies are doing their job, according to Arizona State University economist Chris Herbst. The overall rise in child care spending has been driven mostly by wealthy families spending ever-increasing amounts.

Still, the subsidies could have a negative effect on the supply of child care. A recent working paper from Princeton doctoral student So Kubota suggested that when subsidies are more available to low-income mothers, they’re less likely to open their own home-based day care centers. They find better-paying jobs instead.