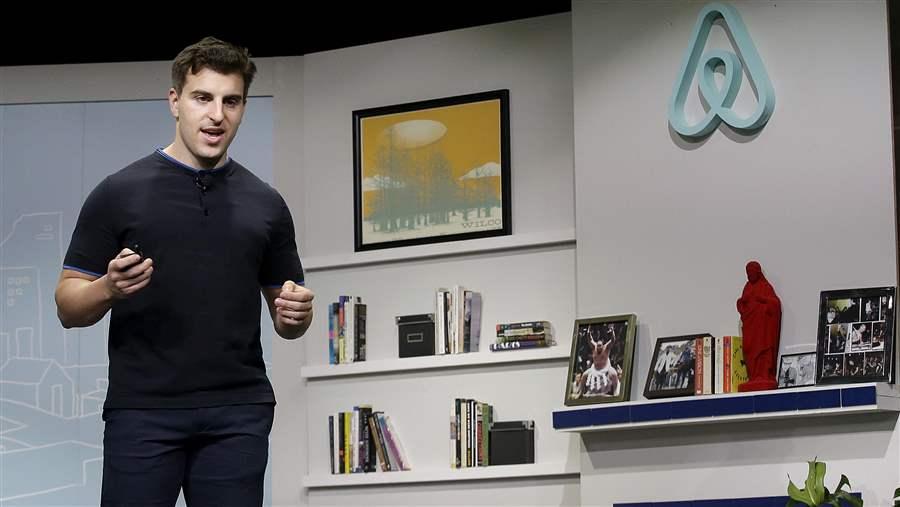 Airbnb CEO Brian Chesky speaks during an event in San Francisco this year. The company has been increasingly willing to work with cities.

Short-term rental website Airbnb has released a new “policy tool chest” that outlines a few ways it has helped shape and enforce city short-term rental rules, another sign that the online marketplace has become increasingly willing to negotiate with local governments as its business grows.

Airbnb now collects and remits tourist taxes on behalf of renters in many cities and states. Cities have had a tougher time figuring out how to adjust their zoning laws to let people rent their property as lodging, get property owners to sign up for permits and convince Airbnb to help enforce city rules against abuse of the practice, such as operating illegal hotels.

The company’s latest brief outlines a number of partnerships that address some of these issues, such as an agreement with New York and San Francisco that the website will eject hosts who have been cited multiple times by law enforcement authorities.

The New York Times reports that as part of a deal to operate legally in New Orleans, Airbnb has agreed to share the names and addresses of its hosts with the city and to automatically sign hosts up for city permits. The company is also not going to list accommodations in the historic French Quarter.

Airbnb also recently resolved a legal fight with New York City. The city agreed to enforce a new state law by punishing hosts who list illegal rentals on the Airbnb website, rather than the company itself.