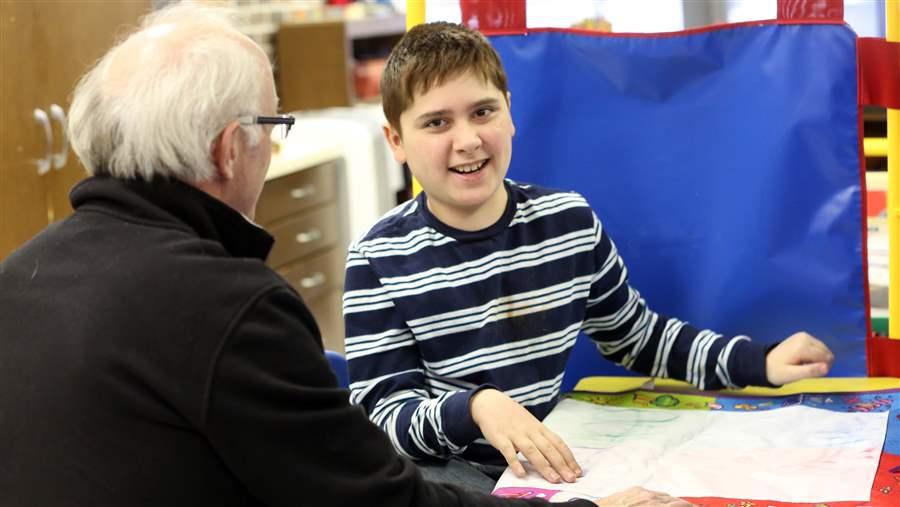 A fifth-grader with autism at an elementary school in Dubuque, Iowa. Advocates for disabled students say the absence of national standards means children in some states get a better education and more services.

The Supreme Court review of a battle between the parents of an autistic child and his Colorado school district could help raise the standards of education for some of the more than 6 million disabled schoolchildren across the United States. But it could also prove expensive for already cash-strapped school districts.

Federal law guarantees disabled students a free and appropriate public education, but precisely what that means isn’t well defined. Federal judges often have had different interpretations of what they’re entitled to, something lawyers for the Colorado family and other advocates for disabled students say leads to better education and more services for disabled children in some states than in others.

But some groups that represent school administrators fear that setting a national standard would prompt more parents to demand additional services for their children, leading to costly court battles and forcing schools to spend more on therapies or pay for disabled children to attend private school.

“Disabled people and their families say kids are not getting the help they need,” said John Pitney, a political science professor at Claremont McKenna College and the author of The Politics of Autism.

“School districts want to provide services,” Pitney said. “But they have limited resources and they’re afraid that this case will trigger trade-offs that they won’t like, that money they spend on this is not going to be available for other purposes.”

The case, named for a 17-year-old student who is referred to as Endrew F. in court documents, is slated to be heard by the justices in January. The legal battle largely boils down to whether disabled children are entitled to “some educational benefit,” as the 10th U.S. Circuit Court of Appeals ruled in the Colorado case, or whether schools should meet a higher standard and provide a “meaningful benefit” to students, as federal appellate courts in the 3rd and 6th circuits have ruled in cases from Pennsylvania and Tennessee.

Gary Mayerson, a lawyer on the board of the advocacy group Autism Speaks, which submitted a friend-of-the-court brief siding with Endrew’s family, said schools should spend more now, in the wake of a rise in diagnoses of autism since the 1990s. It’s ultimately in the state’s financial interest to avoid expenses that come with caring for disabled adults, he said.

“They should be investing whatever funds necessary to produce students who graduate to something that’s meaningful for them — greater independence and greater self-sufficiency. They’ll spend way less later on,” he said.

Congress tried to make schools more accessible to disabled students in 1975, and that law has evolved into what is known today as the Individuals with Disabilities Education Act (IDEA). The law doesn’t set a direct standard for special education — it requires schools to handle each child’s education through an Individualized Education Plan (IEP) — and, in a 1982 case, the Supreme Court avoided setting one.

In deciding the case, which involved a deaf student who was seeking a sign language interpreter, the court said the intent of the disabilities education law “was more to open the door of public education to handicapped children … than to guarantee any particular substantive level of education once inside.”

In the Colorado case the high court is considering, Endrew’s parents pulled him from public school because, they said, his IEP changed little from year to year. Goals for the child, like learning his classmates’ names and improving his writing skills, remained on the plan. They wanted the school district to pay for tuition at a private school for autistic children.

Lawyers for the school board in Douglas County, about 30 miles south of Denver, said while Endrew’s IEP goals largely remained the same, teachers’ expectations of him increased every year.

They argue the law was written without a fixed national standard so that educators could tailor education plans to a broad range of disabilities with varying levels of severity. Trying to set a standard — courts have used the terms “some benefit” and “de minimis” (to a negligible degree), along with “more than trivial” — comes down to semantics, they argue.

The school district points to the decision in Endrew’s case by the 10th Circuit, in which the court wrote that, “Although the ‘meaningful benefit’ standard is purportedly higher than the ‘some benefit’ standard, the difference between them — that is, how much more benefit a student must receive for it to be meaningful — is not clear.”

Several groups that represent school administrators, including school boards and superintendents, say schools already are providing quality, individualized education to special needs students. And, they say, the proper venue for setting national standards would be in Congress, which has chosen not to add a standard to the law despite reauthorizing IDEA several times.

But many parents and advocates for students with disabilities say the law is outdated, passed at a time when legislators were more focused on physical disabilities than behavioral or developmental ones. They cringe at the idea of the nation’s disabled children receiving an education that is only of “some benefit” to them.

“Can you imagine being parents and being told your child might not have access to a meaningful level of care? How is that even a question?” Mayerson said.

A victory for Endrew’s family could have costly implications for schools across the country.

Lisa Soronen with the State and Local Legal Center, which represents organizations such as the National Governors Association at the Supreme Court, said while any standard set by the Supreme Court would affect all disabled students, most don’t have disabilities that are serious enough to require significant changes from schools. But the fraction of those that do could be significant.

“Where the rubber is going to hit the road is where you have significantly disabled kids or children who have multiple disabilities that make them more difficult to educate,” she said. “Schools would have to look at that population and see what they need to do to educate those kids in a meaningful way.”

Many special educators already offer disabled children a quality education, according to the National Association of State Directors of Special Education, which filed a brief that did not take a side in the Colorado case.

Special educators aren’t sitting around “saying, ‘How can we create an educational plan that’s just above the minimum standard for education?’ I don’t know any of them that do that or think that way,” said Naomi Gittins with the National School Boards Association, which plans to submit a brief in support of the Colorado school district.

But the current standard helps insulate schools from lawsuits, said Dan Unumb, director of the Autism Speaks Legal Resource Center. “Parents have a very uphill legal battle to make the legal showing they have to make,” he said. If the court sides with Endrew, it would be easier for parents to sue to enforce their rights, he said.

Another case before the Supreme Court also could make it easier to sue schools. The high court heard arguments in October in a case brought by the parents of a girl with cerebral palsy who sued a Michigan school district for emotional damages after it limited where she could use her service dog at school. The case takes an unusual approach, suing not under IDEA but under the Americans with Disabilities Act. If the court sides with the parents, families would be able to take schools to court and seek monetary damages — something the administrative court process under IDEA does not allow.

Disability groups that have sided with Endrew, such as Autism Speaks and the National Disability Rights Network, say a win for their side could encourage schools to improve their special education programs, perhaps by hiring people and using technology that can provide more therapy or sending existing staff to more training.

But schools are already underfunded when it comes to special education, receiving only part of the federal funds they were promised when IDEA was first passed.

Advocates for administrators said schools likely would be forced to boost spending on lawyers and disability education experts to testify about education plans for children, as they try to fight off cases from parents seeking more therapy or private school tuition for their child.

The private school Endrew’s parents send him to charges school districts about $76,000 a year per student. More time in therapy can be expensive, as well. People trained in applied behavior analysis, a common therapy for autism, often charge more than $50 an hour, Pitney said.

Sasha Pudelski, with the School Superintendents Association, said the threat of litigation would pressure school personnel to frequently re-evaluate students with disabilities, and this could detract from classroom time. “Schools will have to demonstrate through paperwork and documentation that they’re doing more than enough for students with disabilities,” she said. “And that will be expensive and a new administrative burden.”

No matter how the high court rules, “It’s a painful case,” said Pitney of Claremont McKenna. “If Endrew F. loses, a lot of parents and kids aren’t going to be getting services they need. And if he wins, there’s going to be a pretty serious financial and administrative burden on school districts.”