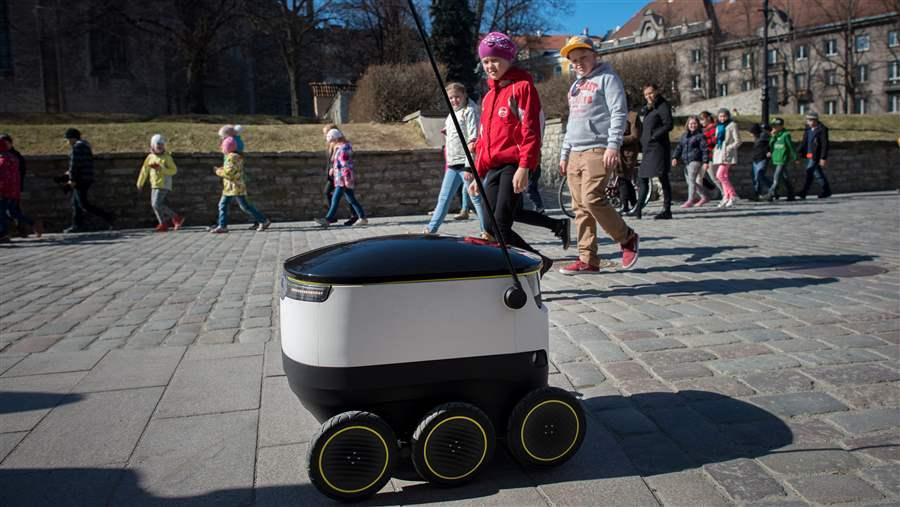 Schoolchildren watch as a self-driving delivery robot developed by Starship Technologies drives past them in Tallinn, Estonia. The robots are arriving on sidewalks in two U.S. cities this month.

Editor's Note: This story has been updated to say that Starship Technologies has tested its robots in 58 cities in 16 countries.

WASHINGTON — Designers of futuristic cityscapes envision delivery drones dropping off your packages from the sky and driverless cars taking you to work. But the robotic delivery invasion already has arrived in the form of machines that look like beer coolers on wheels scooting along the sidewalks.

The ground-bound robots, developed by the science fiction-sounding company Starship Technologies, will be showing up any day in the nation’s capital and in Redwood City, California. They could soon be in up to 10 cities, ferrying groceries and other packages over what the company calls the “last mile,” from a neighborhood delivery “hub” to your front door, all for as little as $1 a trip.

A second company, TeleRetail, plans to test its sidewalk robots in Washington and other cities, including Mountain View, California, next year.

Like driverless cars, the delivery robots use cameras, GPS and radar to “see” their urban environment and navigate through it.

The robots are the first of what the companies foresee as a wave of inexpensive, high-tech, electricity-driven alternatives to gasoline car-driven shopping trips and delivery trucks that contribute to traffic gridlock and pollution. Urban futurists see the little robots as an integral part of a digitally based “smart city” landscape — although it will take time for humans to adjust to them, and they come with privacy concerns.

“We think there will be hundreds, if not thousands, of robots on the ground eventually around the world,” said Allan Martinson, chief operating officer of Starship Technologies, based in London and started by the co-founders of internet telephone company Skype.

Torsten Scholl, founder of TeleRetail, which is based in Switzerland, said, “Why have a vehicle as big as an autonomous car to deliver goods? We think of it as a self-driving trunk.”

And tech gadget website Tech Crunch has called autonomous vehicles — like drones, driverless cars and delivery robots — among the “Top Five Technologies” that will define cities in the next decade.

Starship’s delivery robots work this way: Customers use a smartphone mobile application to order their delivery. A text alerts customers — “You have a robot waiting for you outside” — when the robot is near their home or business. A person must be present to receive the delivery because only the customer has a unique code to unlock the robot’s box.

Cities that have laid out the welcome mat for the robots see practical promise in what can first appear to be a passing fancy gizmo.

“We’re excited,” said Catherine Ralston, economic development manager of Redwood City, where the robots will start working any day now. “They did a video in our downtown of the robot going into the bakery, picking up baked goods, and at the moment it rolled into City Hall, it popped open and presented the cookies to City Council.” They’re thinking of using the robots for city services, such as delivering library books.

The Washington, D.C., Council opened the door to the machines by passing legislation last month that allows up to five different robot companies to operate in the area, though not in the downtown business district.

“To be candid, I’m not at all futuristic. I’m a here-and-now kind of person,” said Leif Dormsjo, head of the District’s Department of Transportation. “But our approach to transportation innovation is that we want to be a catalyst for new and interesting technologies. We have a permissive attitude about cooperating with new technologies.”

Whether city dwellers will be as enthusiastic and accepting of the little robots as their city leaders are is open to question.

A year ago, a robot called HitchBOT traveled across Canada, the United Kingdom and the Netherlands before it was brought to the United States. The robot was a social experiment started by two Canadian professors. It looked like a cartoon human and was designed to be picked up on the side of the road voluntarily by drivers, like a hitchhiker.

It posted photos of its adventures to its popular Twitter, Facebook and Instagram profiles, and its trek appeared to be well-received. But after just two weeks in the United States, the HitchBOT’s world trip ended when it was found dismembered in Philadelphia’s historic Old City neighborhood.

“Humans don’t always act in rational ways,” said professor Missy Cummings, director of the Humans and Autonomy Lab at Duke University. “Look, I’m from the Deep South, and as soon as a robot delivers a six-pack of beer down there, they’ll get out the guns and shoot it up.”

Starship Technologies has tested robots in 58 cities in 16 countries, Martinson said. More than 1.7 million people have encountered the robots on sidewalks, or used their services — without incident, he said.

“We took a video in London showing that 3,000 people passed by our robots without even noticing them.”

Ralston of Redwood City said test robots rolling around the city haven’t caused any issues so far. “People enjoy seeing the little robots. Or they completely ignore them, they don’t even take a glance,” she said. “They realize, OK, there’s something rolling along the sidewalk. It looks all right.”

In a northwest neighborhood of Washington recently, one Starship robot drew some attention as it scooted around pedestrians and bicyclists on a busy sidewalk.

Resident Timothy Sanders stopped his bike to watch it weave in and out of human traffic, avoiding pedestrians and bikers. “It’s amazing, it’s very futuristic,” he said. Reginald Isaac stopped to watch it too. “Technology be real fly,” he said, laughing.

But Duke’s Cummings worries that new technologies — like drones and sidewalk robots — are being developed without enough attention paid to how they will interact with people, or how people will react.

“It’s a huge problem in robotics, which are developed by engineers” who know little about human interaction, she said. “Look at Google Glass,” she said. The eyeglasses had tiny screens that allowed internet access and wearers could take photos and videos using voice commands.

“It wasn’t weird to geeky engineers,” she said. But real people didn’t want to use or wear the glasses — or have their photos taken by people wearing them, she said.

Will Robots Know Too Much?

The presence of video cameras in the robots is a potential privacy issue, too, said Jeramie Scott, director of the Domestic Surveillance Project of the Electronic Privacy Information Center in Washington, D.C.

Autonomous devices use high-definition cameras that can take video of people and places from a sidewalk or from the air, as in the case of a drone. Scott questions: Who controls those images? How can they be used?

“You can imagine when we get to the place where we have these autonomous drones, on the ground or in the skies flying around, with a lot of surveillance equipment,” he said. “We need to understand what is collected and be transparent. We need some kind of oversight in place before the line gets pushed too far.”

In August, the first federal regulations went into effect for flying drones, not sidewalk robots. The Federal Aviation Administration established rules for unmanned aircraft weighing less than 55 pounds and being flown for “routine nonhobbyist use.”

Those uses include surveying, real estate photography and site inspections. An operator must keep the drone within sight. The rules aren’t aimed at commercial delivery, to places where humans are not close, by autonomous drones — like those being developed by tech giants Amazon and Google.

And they don’t include any restrictions concerning the privacy of people who may be within the drones’ camera range. As a result, the Electronic Privacy Information Center has sued the FAA.

Starship Technologies uses high-definition video cameras as part of its location triangulation, which allows the robots to navigate sidewalks and curbs, to track the robots. But spokesman David Catania said the company generally does not keep high-resolution images, except if there is a safety or security issue, such as vandalism.

When the devices are being operated by humans, a lower resolution feed is used and the images are blurred. And the robots can’t identify the MAC numbers of nearby cellphones, he said. (MAC numbers, or addresses, are unique to individual devices and can be used to identify a person and track their movements.)

Starship co-founder and CEO Ahti Heinla said in a company promotional video that each robot is equipped with speakers in addition to video cameras, “so if somebody bothers the robot the operator [watching from a headquarters far away] can actually shout, ‘Hey! What are you doing? … The police are coming in five minutes! We know your location, and you are being filmed as well!’ ”

TeleRetail’s founder Scholl said the company could phase out cameras because new, more powerful radar is becoming available that is so precise in identifying objects that cameras might no longer be needed. He said his devices, which are used in small villages in Switzerland for now, don’t store videos or photos. “We just look,” he said.

Scholl said his technology “isn’t perfect,” but it’s just the start of a new disruption from technology that will replace human-controlled vehicles worldwide.

For tech-friendly cities like Austin, Texas, city planners say, “Bring it on.”

“We’re always open to new ideas in Austin,” said Jason Stanford, communications director for the mayor’s office. Starship has made a presentation about introducing the robots to Texas’ capital city, he said. And the city is open to the idea.

“We’ve got [driverless] Google cars operating all over the place here, and we don’t get a single complaint about them,” he said. “Now, we do have complaints about wild peacocks, but that’s animals. …”