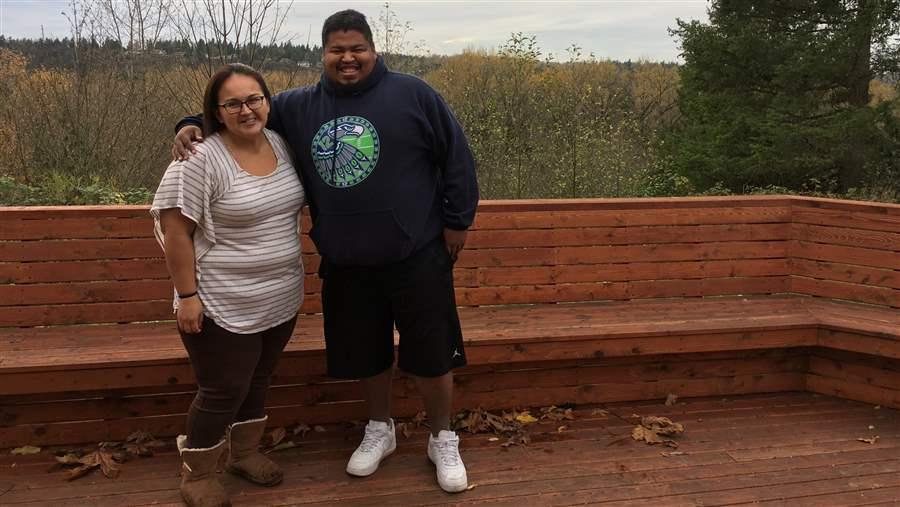 Misty Jones and Tony Rutherford stand on the deck of a recovery center they help run on the Muckleshoot reservation in Auburn, Washington. Native Americans are at least twice as likely as the general population to become addicted to drugs and alcohol.

AUBURN, Washington — When Misty Jones looks back on her drug-using years, she sees a pattern. Since she was 18, she’s been having babies, using drugs, losing custody of her babies, and trying to quit drugs so she can get them back.

Jones attributes much of her ability to stay sober to the treatment and special housing she receives here on the Muckleshoot reservation, about 30 miles south of Seattle, and to buprenorphine, the addiction medication she takes every day. Plus, she said, “I’ve looked death in the eye too many times to think I could keep doing it.”

Ten years ago she left her own reservation, 70 miles north of here, to join her boyfriend, Ben Stewart, a member of the Muckleshoot tribe and father of her last four children.

Now, entitled to the health care benefits offered on the sprawling Muckleshoot reservation, she lives in a recovery home for 12 women and children in a residential neighborhood surrounded by lush flatlands and waterways with soaring views of Mount Rainier.

Nationwide, Native Americans are at least twice as likely as the general population to become addicted to drugs and alcohol, and three times as likely to die of a drug overdose. In Washington state, Indians die of drug overdoses at a rate of 29 in 100,000, compared to a rate of 12 for whites, 11 for blacks, 3 for Hispanics and 2 for Asians, according to the state Health Department.

Compounding the problem, the majority of the nation’s 2.9 million Indians living on and off reservations have little to no access to health care, much less mental health and addiction services.

The Muckleshoot and a handful of other affluent tribes in the Northwest and across the country are becoming exceptions. With money from casinos and other businesses, some tribes, mostly near major cities, have been able to build world-class health care systems on their reservations that include addiction treatment programs.

In addition, Washington is one of 32 states and the District of Columbia that have expanded Medicaid to cover able-bodied adults. The federal-state health care program for low-income people pays the bill for treatment.

On the Muckleshoot reservation, population 3,500, a behavioral health center currently treats 170 people for opioid addiction. At least 85 percent of those patients are covered by Medicaid, said Dan Cable, the program’s manager. The rest are covered by a tribal health insurance plan.

Developed seven years ago, the Muckleshoot treatment center and recovery housing have so far served everyone in need, with no waiting lists.

But the lifelong nature of addiction and the increasing availability of heroin and other illicit opioids demand more investment every year, particularly for recovery housing and support services, said Dr. Anthony Dekker, an addiction specialist and expert on Indian health. He addressed a gathering of 25 tribes from Idaho, Oregon and Washington here in November to discuss the opioid crisis in Indian country.

The recovery home where Jones lives is full, so the tribe recently purchased another, larger house for women and children that will be available early next year. Later in the year, more housing will open for people with active opioid addiction, Cable said.

The Muckleshoot reservation, like many in the region, also offers a needle exchange program and distributes the overdose rescue drug, naloxone, to tribal members.

Nearly all the tribes represented at the November meeting provide some level of addiction services, needle exchange and naloxone distribution programs, and recovery housing on their reservations, though funding is limited for many.

Like many Native Americans, Jones grew up with addiction in her family. The oldest of four children, she cared for her siblings when she was young, while her parents abused drugs and alcohol, she said. “I hated drugs, because I saw what they did to my family.”

Still, Jones took the same path. She started drinking and smoking marijuana in junior high school, moved to methamphetamine in her late teens, and prescription painkillers and heroin in her early 20s. She said she signed up for addiction treatment at least 13 times over the years and went to drug courts, but never really had her heart in it. “I was just manipulating the system so I could be with my kids,” she said.

According to a 2014 study by the National Institute on Drug Abuse, 61 percent of American Indians in 10th grade had used marijuana, compared to 33 percent of 10th-graders in the general population. The use of heroin and of the widely abused opioid painkiller OxyContin by American Indian 12th-graders was about double the national average.

So-called adverse childhood experiences, such as alcoholism, drug abuse and domestic violence in a family, emotional neglect, incarceration of a family member and physical or sexual abuse, are known to lead to a higher risk of addiction and other behavioral and mental health problems later in life.

In Native American populations, Dekker said, chaotic family lives, suicide, mental illness, addiction, domestic violence and other trauma are the norm. Much of the misery, he said, was passed from generation to generation, as Native Americans lost their ancestral land, were relocated to reservations, and mostly lived in deep poverty.

A major source of intergenerational trauma, according to Dekker, who spent much of his career working for the U.S. Indian Health Service, was a mid-19th century federal program that attempted to assimilate Native Americans into the rest of the nation’s culture by shipping thousands of Indian children to boarding schools across the country. Many of the children were abused and most lost their cultural identities.

The practice continued until 1978, when the Indian Child Welfare Act gave Native American parents the legal right to deny their children’s placement in off-reservation schools.

Around the same time, the Muckleshoot tribe regained its rights to fish salmon in its ancestral waters under a Washington court ruling. That gradually allowed tribal members to climb out of the poverty they had suffered for decades.

But by then, family bonds had been cleaved and parenting had become a lost art. Today, addiction treatment specialists say the Muckleshoot members they care for still suffer from trauma and ongoing chaos in their lives, despite the tribe’s newfound wealth.

Gloria Malone, a substance abuse counselor at one of the reservation’s long-term recovery houses, said all of her patients “struggle with the brokenness and sorrow of the past.”

In addition to lacking a stable family system, she said, they are dealing with unemployment and legal problems that include open warrants, parole violations and unpaid fines. Most have a history of domestic violence, sexual abuse and incarceration, she said. “They’re in a really stuck situation.”

Starting about 20 years ago with a successful casino and other businesses, including gasoline stations, entertainment centers and resorts, the Muckleshoot’s economic fortunes began to improve dramatically. Rather than disperse their new revenue to members, tribal leaders decided to invest in education, health care and other social services.

The Muckleshoot built a first-rate health care system that combines medical and mental health services, dental, vision, nutrition and fitness services on one campus of airy longhouse-style buildings. A few other affluent tribes have done the same thing, but they are a minority.

When the opioid epidemic hit the reservation about eight years ago, the tribe added comprehensive addiction treatment services that include two of three medications approved by the Food and Drug Administration, plus outpatient counseling and long-term housing for people in recovery.

Today, the Muckleshoot behavioral health center sees 170 patients with opioid addiction. Of those, 85 are taking buprenorphine, which eliminates opioid withdrawal symptoms and drug cravings. Thirty-two are receiving a monthly injection of Vivitrol, which blocks the euphoric effects of opioids and alcohol. And 53 are receiving counseling and other services without addiction medications.

None of Muckleshoot’s patients are taking methadone, which like buprenorphine eliminates withdrawal symptoms and cravings without producing a high. The tribe’s addiction center does not include a federally regulated methadone clinic and most tribal members do not want to leave the reservation, Cable said. For patients who need it, the center has provided counseling and other services to patients who travel to nearby Takoma for their daily dose.

When tribal leaders began to realize they had a serious problem with prescription opioids and heroin, they called on Dr. Richard Ries, an addiction specialist and professor of psychiatry at the University of Washington Medical School in Seattle.

At the time, Ries said, the Muckleshoot had a fully integrated health care system that rivaled anything available in the Seattle area, but their addiction treatment capacity consisted of a handful of abstinence-based programs that weren’t working.

“I suggested they integrate medication-assisted treatment into what they were already doing,” Ries said, “and I didn’t have to bend any arms. They were ready to change.”

The addiction counselors hired by the tribe found that the opioid users who took medication did well, Ries said, “but they needed a longer leash because their rate of recovery was slower than alcohol, meth and other drug users.”

“When they put too much pressure on patients to engage in counseling, they actually drove them away,” he said. “Native Americans, in general, have a reluctance to talk about their problems.”

Today, the center’s medical director, Dr. Jake Bergstrom, said the center’s approach is to let the medications do the work for the first couple of months before pushing patients to attend regular counseling sessions.

“We were throwing a lot of information at them when their brains were just starting to wake up in the first 60 days,” Bergstrom said. The center is exploring the use of noninvasive brain stimulation therapies such as transcranial magnetic stimulation, approved by the FDA in 2008 for depression, as well as nutritional approaches to healing the brain, he said.

“Most of our patients were getting their food from the 7-Eleven and eating way too much sugar, or just smoking and drinking a lot of Red Bulls,” Bergstrom said.

In her 15 months of treatment, Jones said she has evolved from a “drug dumpster,” who was homeless during most of her most recent pregnancy, to a mother capable of caring for her 11-month-old baby, Dakari, and managing Lilly House, the Muckleshoot women and children’s recovery home.

After wiping Lilly House’s kitchen countertops with a damp cloth one more time and taking her buprenorphine dose, Jones gathers her keys and bags to leave for a weekend trip to the coast with her six children and her boyfriend, Stewart. It will be the first time she’s had them all together in more than two years. “It should be interesting,” she said with a wry smile.

Jones is the first to admit that she has much to learn about parenting. One by one, her kids were taken away from her because she was using drugs and unable to care for them. Her parents took her first child to live with them and tribal child welfare services placed the others with Jones’ cousins.

Someday soon, she and Stewart, who lives nearby at the Muckleshoot men’s recovery house, want to move in together and raise some of their children on their own, she said. But they agree that living separately now is best for their recovery. They used drugs together for so long that when they see each other that’s all they want to do.

“My history told me I couldn’t raise a child,” Jones said. “But being with my kids is always what I wanted most.”