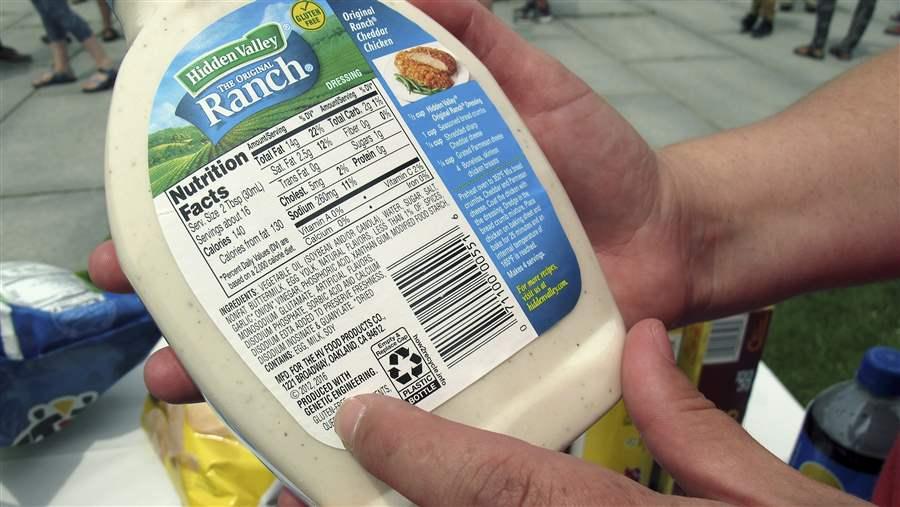 A bottle of salad dressing is labeled as being produced with some genetically engineered ingredients. The U.S. Congress set standards for labeling food made with genetically modified organisms after states began passing laws.

For much of the last two years, Democratic state Sen. David Zuckerman of Vermont thought he was victorious. For more than a decade, the organic farmer had tried to force companies that sell food in his state to label products that include genetically modified organisms (GMOs).

His legislative colleagues finally agreed to his proposal in 2014, and the law took effect this July. But just weeks after it did, the U.S. Congress nullified it by passing a less restrictive federal labeling law.

Congress’ point, Zuckerman said, was not to encourage more food labeling nationwide, it was “to override Vermont’s law.” It also was meant to halt the spread of state labeling laws that could be in conflict with each other or require food companies to label products differently from state to state.

Although the federal government has set national standards for food, air and water quality, Congress typically leaves much of the policymaking that can affect environmental public health, such as auto emission inspections and wastewater treatment, to the states.

But as the food labeling law illustrates, Congress increasingly is stepping in on environmental health issues — at the urging of affected industries — to prevent a patchwork of state laws and regulations by setting national standards. In the last 12 months, Congress also signed a ban on plastic microbeads in cosmetics and an update to the 40-year-old Toxic Substances Control Act.

Doug Farquhar, director for the environmental health program at the National Conference of State Legislatures, said the actions are rare for a gridlocked Congress that doesn’t “pass anything.” Only when confronted with pressure from food, cosmetics and chemical companies that don’t want a patchwork of possibly conflicting state laws, does Congress decide “to compromise and get something done.”

Industry is happy with Congress’ action to set a single standard with which to comply nationally. So too are some environmental health advocates. But state leaders like Zuckerman say that by Congress stepping in, it can reduce state lawmakers’ ability to protect their constituents.

Zuckerman, who is leaving the Vermont Legislature to become lieutenant governor, points to GMO labeling for example.

Agricultural seed companies use genetic engineering to alter a plant’s DNA to be resistant to disease and pests. Animals used for food are not genetically modified, but the food they consume may be. Although scientific research has found that growing and consuming GMO crops is safe, many consumer advocacy and environmental health groups worry about unknown, long-term health and ecological effects of the engineered food.

Zuckerman proposed his law so Vermont consumers could decide whether they wanted to eat food that contained GMO ingredients and so their long-term effects could be studied. And he said companies already were starting to comply with the law before Congress stepped in.

Connecticut and Maine also passed GMO labeling laws in 2013 and 2014. But their laws would not take effect unless a handful of other nearby states passed similar legislation. They argued this would make compliance easier for food manufactures, by allowing them to target their marketing and production to a specific region.

The federal GMO labeling law requires companies label GMO food with text, a symbol, or an electronic code that shoppers can scan with a smartphone in the grocery store to find its ingredients. Small companies could simply list a website or phone number to call for GMO information.

Zuckerman said it doesn’t do enough to tell shoppers if their food is made with GMO ingredients, and it lacks enforcement provisions. By relying on smartphones to find out about ingredients, busy shoppers or people who don’t have smartphones can be left in the dark about what they’re buying.

“Are you going to make 40 1-800-number phone calls while you’re towing two children through the grocery store to find out what’s in the food?” he asked.

In the absence of congressional action to update the federal Toxic Substances Control Act (TSCA) of 1976, states have been passing laws to restrict the use of certain chemicals in manufacturing children’s toys, furniture and other products.

“The federal government was not acting and the states jumped into the void here,” said Richard Denison, a scientist with the Environmental Defense Fund, an advocacy group.

Thirty states have enacted bans or restrictions on the use of about a dozen chemicals or groups of chemicals, he said, because the federal law didn’t demand that the U.S. Environmental Protection Agency routinely review the safety of the chemicals already in use.

The agency reviewed their use only in certain situations, such as when other nations considered banning a chemical.

That changed in June, when Congress updated the TSCA to require the EPA evaluate existing chemicals and decide whether to restrict them after the chemical industry had tired of dealing with the varied state laws and began lobbying for a national approach.

The American Chemistry Council, which represents the chemical industry, said the patchwork of laws confused consumers and businesses, and that the new federal law creates a more predictable business environment for its member companies.

But, like Zuckerman in Vermont, some state leaders aren’t happy with the federal law. They say it usurps their authority because once the EPA decides to assess a certain chemical it’s harder for states to pass restrictions. And if the EPA rules that a chemical is safe, a state cannot ban it without an exemption or a waiver.

The EPA has already identified the first 10 chemicals it will review under the updated law. Among the chemicals up for review are flame retardants and cleaning solvents.

Attorneys general from at least a dozen states told Congress they were concerned the federal law abrogated their states’ efforts to protect consumers and argued that seeking exemptions or waivers would be too cumbersome.

New York Attorney General Eric Schneiderman said it creates too many obstacles for states that want to be active in regulating chemicals.

“Generations of New Yorkers have benefited from our state’s robust environmental and public health laws,” Schneiderman, a Democrat, said. “New York is a national leader on these issues and the federal government should not diminish our authority to continue to ensure protections.”

Not every action Congress has taken on environmental health issues in the last year has left state officials unhappy. Consider its national ban on the use of microbeads, a product found in cosmetics such as toothpaste, face wash and body scrubs.

The tiny plastic beads, which began being used in cosmetics in the 1990s, are deemed safe for humans. But they are too small to be caught by filters at wastewater treatment plants. As they pass through the plants they collect toxic pesticides and chemicals, and then end up in waterways where they can harm marine life. Scientists estimate that 8 trillion microbeads end up in U.S. waters every day.

As a result, states began banning their use in products sold inside their borders, starting with Illinois in 2014. Since then, California, Colorado, Indiana, Maine, Maryland and New Jersey have adopted bans. And similar bans have been proposed in dozens of other states.

The flurry of state action and the urging for a nationwide law from the cosmetics industry prompted Congress to act late last year. It gave manufacturers through next year to stop using microbeads.