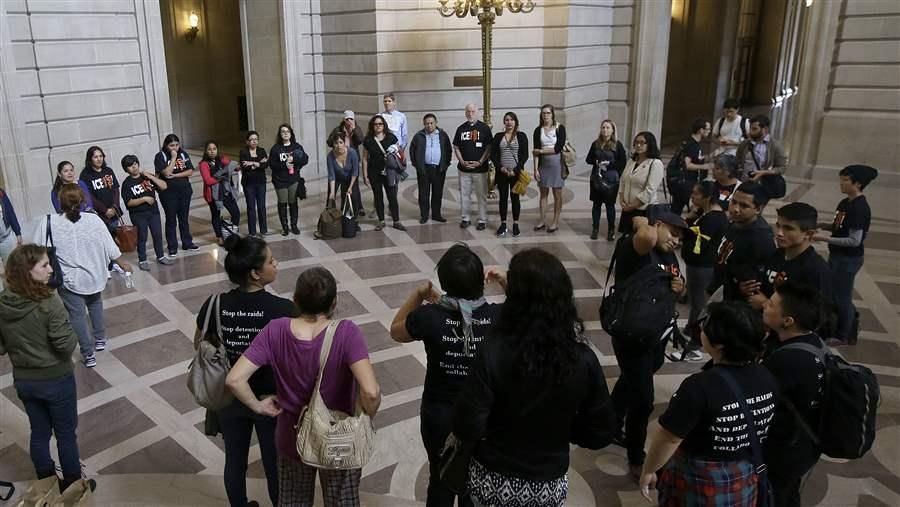 A group calling for San Francisco to maintain its sanctuary protections for people who are in the country illegally gathers before a board of supervisors meeting at City Hall. President-elect Donald Trump has threatened to withhold federal money from “sanctuary cities” that don’t honor federal requests to hold prisoners for possible deportation.

Big “sanctuary cities” like Chicago and New York say they are determined to defy President-elect Donald Trump’s command to detain undocumented immigrant criminals. But many smaller ones may find it harder to do so.

Smaller cities and counties that ignore requests from federal authorities to detain undocumented immigrants, but don’t see themselves as sanctuaries, may find themselves vulnerable to the president-elect’s threat to withhold federal money from them if they do not cooperate, especially in states where Trump won a majority of votes.

And Trump has vowed to withhold what amounts to hundreds of millions, if not billions, of federal dollars for policing, jails, courts, housing, roads and education from cities, counties and states that provide a “sanctuary” by not cooperating with U.S. Immigration and Customs Enforcement (ICE) agents and detaining the criminals for deportation.

More than 300 cities and counties are counted as sanctuaries because they defy federal immigration policy. Some of them, including big liberal cities in Democratic states, have embraced the label. But many smaller sanctuaries say they have no choice because state and federal courts have ruled that local jurisdictions can be found in violation of immigrants’ civil rights if they detain them simply at the request of ICE, without a court order. And now they face the possibility of losing federal money.

“Some of these smaller areas are between a rock and a hard place,” said Hadi Sedigh, an associate legislative director for the National Association of Counties. “They’re being told on the one hand that there are these court cases and they’re going to get sued if they cooperate, and on the other hand the federal government is saying you’re going to lose funding if you don’t cooperate.”

Dan Altena, sheriff of Sioux County, Iowa, already feels the pressure. Altena’s county is a rural one, where 82 percent of the vote went to Trump in the presidential election. The county’s policy is to not hold immigrant prisoners for federal authorities without a court order demanding that it do so. And Altena said it pains him to be called “a sanctuary county.”

Many of the unauthorized immigrants he has jailed are arrested for minor crimes, such as driving without a license, but some of them are being sought by federal authorities for deportation for more serious crimes. And he would like to comply, especially with repeat offenders.

But he doesn’t. Sioux County stopped honoring requests to hold on to unauthorized immigrant prisoners without a court order in 2014, when a federal judge ruled that an Oregon county jail violated a woman’s civil rights by holding her based only on a request — called a detainer — from federal immigration authorities.

Many other local sheriffs are taking the same approach, even if, like Altena, they think that more of the undocumented immigrants should be held for ICE so they can be deported.

In all, local authorities in 43 states refused to honor more than 16,000 detainer requests from ICE from October 2013 to December 2015. Only in Alaska, Delaware, Hawaii, Maine, Montana, Vermont and Wyoming did local officials honor all requests. And detainers are relatively rare in those states.

For groups like the Center for Immigration Studies that favor limits on immigration, the idea of any sanctuary that stands in the way of deporting people who are convicted of a crime is anathema.

“I am very familiar with the argument made by the Sioux County sheriff. I do not agree,” said Jessica Vaughan, director of policy studies for the center. She said such sanctuary policies need to change — and thinks they will under a Trump administration.

The current system allows a great deal of flexibility for cities and counties to decline detainers and to decide on their own which unauthorized immigrants to detain based on what crimes they committed, said Muzaffar Chishti, an immigration policy specialist at the Migration Policy Institute, a nonpartisan think tank that studies immigration.

“They will let you decide which [prisoners] you want to hold and which you don’t want to hold,” Chishti said. “The decision has shifted from federal to the state and local level. It has become random. This is not exactly good for an integrated national policy.”

An investigation by the U.S. Justice Department’s inspector general this year found some departments are refusing to share much information, if any, with ICE. And some of them have been put on notice they could lose funding.

Trump’s threat would appear to go further by withholding more than just law enforcement money from states and localities — though he could face problems doing so. The U.S. Supreme Court has said that if Congress is to impose conditions on federal money disbursed to the states, they have to be related to the purpose of the funding. In other words, Washington could withhold law enforcement money but perhaps not housing, highway or education funds.

And then there is the matter of case law, as determined by federal district and appeals court decisions that blanket many states, which essentially says local jurisdictions can be found in violation of immigrants’ civil rights if they detain them simply at the request of ICE without a court order. Many city and state sanctuary laws are in response to those decisions.

“There are tons of federal grants that [a Trump administration] could try to take away, but I think there would be serious legal challenges,” said attorney Lena Graber at the Immigrant Legal Resource Center, which advocates pro-immigrant policies. “Would the courts put up with the federal government using funds to pressure local jurisdictions to break the law? I don’t think so.”

The Senate Judiciary Committee chairman’s bill also would have limited federal housing and economic development block grants for states, cities and counties that have laws that prohibit sharing information with ICE or refuse to comply with a detainer. The bill was unsuccessful, but could be a blueprint for the Trump administration to enforce compliance.

Vaughan of the Center for Immigration Studies said the Trump administration and Congress should protect localities that honor ICE detainers from civil rights suits. Doing so, she said, would eliminate most sanctuary cities and counties, especially the smallest ones.

“The only sanctuaries left standing would be the most egregious,” she said, pointing to big cities that have taken a political stand to protect unauthorized immigrants. “And if they persist even after losing federal funding, firmer action like litigation may be required.”

At the very least, many local law enforcement authorities argue, ICE should back up its requests to hold on to criminals by getting arrest warrants signed by judges rather than relying on detainers. That way, small municipalities could avoid liability and the federal government could get the cooperation it seeks.