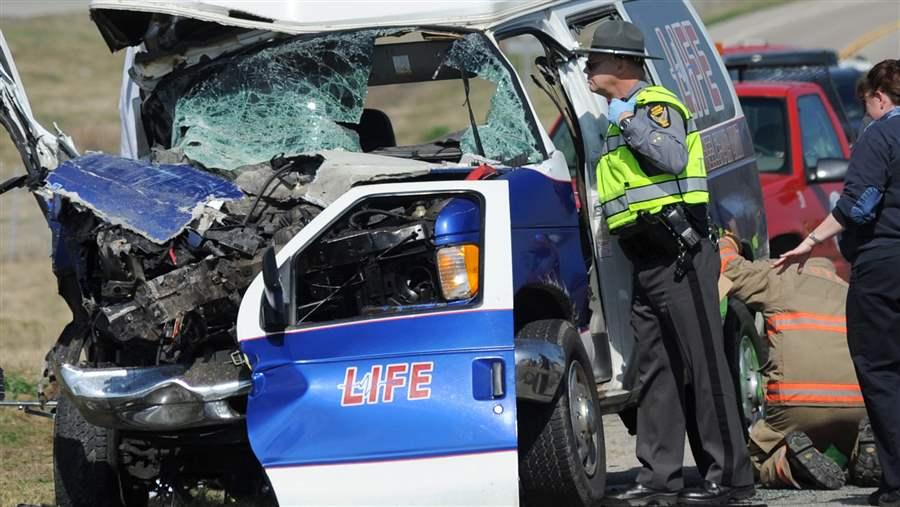 Ohio State Highway Patrol officers investigate the scene of a fatal two-vehicle crash near Chillicothe, Ohio. Ambulances are involved in 4,500 crashes a year, in which 2,600 people are injured and 33 are killed.

When an ambulance driver using her phone’s GPS got distracted and crashed through a guardrail, rolling off an embankment in north-central Ohio in August 2014, the consequences were dire: A 56-year-old patient was ejected and killed, and an EMS worker was injured.

The emergency medical service worker was not strapped in, and the patient was only partially restrained, a situation that is all too common in ambulances across the nation.

Unlike school buses, ambulances are not regulated by the federal government. While states set minimum standards for how they operate, it’s usually up to local EMS agencies or fire departments to purchase the vehicles and decide whether to require their crew to undergo more stringent education and training.

Some agencies demand that crew members in the back of an ambulance use lap and shoulder restraints for their patients and themselves, but many agencies don’t. In some places, ambulance drivers don’t receive any special training before they get behind the wheel, even though they must speed through traffic under tremendous pressure.

“One agency will make them take a course before they can drive. Another will just say, ‘here are the keys,’ ” said Bruce Cheeseman, Idaho’s EMS operations manager.

Ambulances have been involved in 4,500 crashes a year on average over a 20-year period, a third of which resulted in injuries, according to the National Highway Traffic Safety Administration (NHTSA). About 2,600 people a year were injured and 33 were killed. Some were drivers or ambulance crew members, some were patients and some were pedestrians, bicyclists or occupants of other vehicles.

Safety and EMS experts say ambulances should be safer than cars and more like school buses, given that they’re transporting sick or injured people and workers caring for them. While the number of injuries and fatalities may seem small compared to the number of people transported, the experts say state and local agencies need to do a better job overseeing ambulance safety.

“These are vehicles carrying cargo that’s human and vulnerable and fragile because they’re already injured or experiencing a medical emergency,” said Dia Gainor, executive director of the National Association of State EMS Officials, whose members license ambulance services and personnel. “It’s unconscionable that the public is placed at risk when being put in the back of an ambulance.”

The world of ambulances is complex. Fire departments and EMS agencies use them, as do volunteer associations and hospitals. Some counties or cities contract with private companies to provide the 911 ambulances. Others choose to run it themselves. About 54,500 ambulances were on the road in 2010, the latest figure available, according to Gainor.

In the back of a traditional ambulance, which has no airbags, emergency medical technicians and paramedics can sit on one of several seats: a bench that is aligned with the stretcher or cot and faces the patient, a seat on the opposite side, or a rear-facing seat called the captain’s chair, which is in front of the patient’s head.

A 5- to 8-ton ambulance filled with heavy equipment can become a deathtrap in a crash. Cots typically are not bolted to the floor. Electrocardiogram monitors, which can weigh 20 to 25 pounds, usually are not tied down, and medical equipment is often stored on countertops or in cabinets that can fly open.

“If an EKG monitor hits you in the head at 30 miles an hour, it can kill you,” said Cory Richter, a regional director of the National Association of Emergency Medical Technicians.

James Green, a National Institute for Occupational Safety and Health engineer, said his office tested ambulances the way it tests cars: by crashing them into a concrete wall at 30 mph. The tests showed that a patient can jettison out of his stretcher if it is not secured well, slamming into whatever is nearby, often a crew member. “They’re like torpedoes just waiting to happen,” he said.

Green’s agency used the crash test results to develop, with the help of manufacturers, new test methods to evaluate how ambulances are designed and built. It encourages the use of bucket seats that slide backward and forward instead of benches, secure cots bolted to the floor that prevent patients from sliding in a crash, and attaching monitors and equipment to the wall.

But it’s up to states to adopt those standards or others proposed by national groups, such as the National Fire Protection Association, and require local agencies to meet them. Most states haven’t.

Another problem is a human one. Crew members in the back of ambulances often don’t properly secure patients — or themselves.

Only a third of ambulance patients in serious crashes were secured with both shoulder and lap restraints, and 44 percent were ejected from their cots, according to the 20-year NHTSA study.

Gainor, of the national EMS group, attributes those findings to a failure of local policy and state law, which she said should require that patients be fully strapped in. In some ambulances, patient restraints actually are removed or tucked away under the cot, she said.

“The crew often is not educated about how important patient restraints are,” Gainor said. “Nobody thinks they’re going to get in a crash on a run and that it’s going to be lethal for their patient if they don’t strap them in right.”

And it’s not just the patients who are at risk. The NHTSA study found that 84 percent of EMS workers in the patient compartments of ambulances that crashed were not using their own restraints.

Many crew members dislike using them, saying the restraints impede their ability to treat a patient, especially when they’re sitting on one side and the equipment is on the other and they need to move back and forth.

“It’s very difficult for medics to work if they’ve got a patient to treat and they’re required to be tied to a chair, so a lot of them don’t use the restraints,” said Richter, of the national EMT association. “It’s up to the individual agency to enforce it, and many don’t force their guys and gals to do it.”

Richter, who also is a battalion chief for Indian River County Fire Rescue in Florida, said in many agencies, crew members get complacent and may use lap restraints but not shoulder straps, although he insists that his staff do so.

But in other agencies, that’s often not the case. If experienced EMS workers don’t use restraints, newer ones tend to follow suit.

“This is how you’re taught. When you’re brand new, you just follow the practices set forth by the people training you and you don’t question them,” said Thomas Breyer, director of fire and EMS operations for the International Association of Fire Fighters. “You’re up and down treating the patient. You think it’s a way of life.”

Gainor said it’s hard to know the extent of the problem because most state EMS offices do not routinely compile or analyze ambulance crash data or require every local agency to send them that information. Nor do they track the causes of the crashes, or who was at fault, or where crew members were sitting.

While states have the authority to require local agencies to use ambulances equipped with certain safety features or insist that crew members use restraints, it can be a hard sell, Gainor said. The agencies often bristle at the idea of government interference or at spending tens of thousands of dollars more on sophisticated equipment for each ambulance. And they make their views known to state lawmakers.

And while some states require special courses for ambulance drivers, most leave it up to local agencies, which may or may not have such requirements, according to Gainor.

Many EMS experts say every agency should set a minimum level of training for driving an ambulance because it requires a different set of skills than driving a car. There is no center rearview mirror to see out the back window, and they’re often driving in an emergency, navigating corners and obstacles at a high speed.

“You hire these 18-year-olds, and you give them a truck with lights and sirens, and they get a little gas-pedal heavy and have a lead foot,” Richter said.

But ambulances aren’t always in emergency mode when they crash. Sometimes they’re simply taking patients from nursing homes to hospitals or from their homes to dialysis appointments. The Ohio patient who died in the 2014 crash, for example, was being moved from a local hospital to a different medical center.

Gainor said state and local agencies must do more to ensure that everyone riding in an ambulance is safe.

“You need to have appropriate design standards. States need to collect data on crashes. Drivers need to get training. And everyone needs to be restrained properly,” she said. “Otherwise patients are at the mercy of the person driving the vehicle and the practices inside of it.”